Occupy Oakland Rallies Amid Anger over Pepper-Spraying of Students 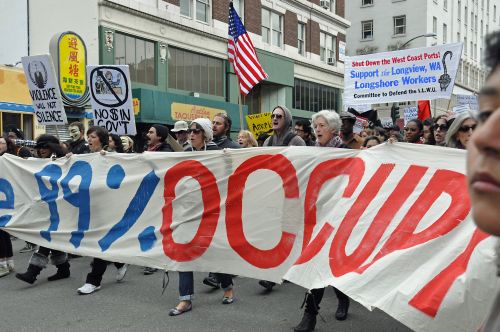 Some 1,500 people marched for the 99 percent in Oakland Nov. 20. Credit: Judith Scherr/IPS

OAKLAND, California, Nov 21 2011 (IPS) - Twice evicted from its encampment just outside city hall, Occupy Oakland sprung back to life Saturday, erecting a new three-dozen-tent camp and defying multiple city warnings that lodging in public spaces would not be tolerated.

Sunday morning, however, police raided the lot and occupants left without resisting and without arrests.

Before protesters tore down the no-trespassing signs, and knocked over the chain-link fence that bordered the large, city-owned lot, some 1,000 people rallied Oakland-style at the site of the original encampment just five blocks away; they beat drums, danced, applauded street theatre and mixed a good time with serious words from housing and union activists and a supporter from Egypt.

Police arrested six protesters and released them soon after. Sunday evening a large crowd gathered at the Federal Reserve and blocked Market Street in front of it. But by midnight the crowd was reduced to around two dozen. No arrests were reported. The large camp of around 200 tents at Justin Herman Plaza continues to operate, but has faced frequent city warnings related to health issues. The camp is cooperating with city officials, cleaning several times each day and cooking off site in order to comply with city administration.


Elsa Matos-Leal with the California Nurses’ Association spoke of threats of layoffs, reduced sick days “and attacks on nursing standards to cut corners…while they reward the mercenary millionaire CEOs millions of dollars in salaries and bonuses.”

The crowd swelled to around 1,500 and marched to the beat of bands and drums two miles to Lakeview Elementary School, one of five Oakland schools slated for closure.

The school board “isn’t listening to us anymore”, said one man identifying himself as the grandfather of two Lakeview School children, addressing the crowd from the back of a flat-bed truck.

The key event of the day was the takeover of a lot belonging to the city. There had been some disagreement among Occupy Oakland sympathisers about whether to occupy this space – 65 percent of a general assembly had voted to reverse an earlier decision to occupy the lot, but a 90 percent vote was necessary to overturn the earlier vote.

A number of nearby residents, including Occupy Oakland supporters, opposed the plan, as did a charter school located across the street from the would-be encampment.

Still, about 500 people returned to the downtown lot, tore down the fence, erected tents and celebrated by dancing in the streets.

Austin Retzlaff set up a tent around seven p.m. He said he was prepared to be arrested and expected the arrest would be non-violent.

“It’s a peaceful movement and I will be peaceful,” he said, explaining that the importance of the occupation movement to him was creating a society where “no one uses power to control what others have.”

Samantha Love stood nearby in the dark, holding her daughter. She said she was there because she felt stuck in her life; she can’t get a job without a college degree – and she can’t afford to go to school.

“No matter what I do in this capitalistic society, I can’t win and I can’t be happy,” she said.

Community attorney and artist Osha Neumann was seated on a bench near towering bronze statues of Ghandi, Harriet Tubman, Frederick Douglas, Thich Nhat Hanh and Mother Teresa, in a little park just beyond the lot populated by hundreds of people, tents, tables where food was being served, and canopies to protect people from the rain.

Observing the scene, Neumann commented on the irony he saw: the peacemaker-statues, who, he said, “embodied the spirit of this movement of transgression and resistance and civil disobedience and nonviolence,” would be looking over an area that would likely be invaded by a violent police action.

But as it turned out, in the early-Sunday-morning drizzle, police did not use batons, pepper spray or tear gas. They gave the sleeping campers 20 minutes to pack up their gear and leave the lot. All complied peacefully.

However, on Thursday, about 70 miles north of Oakland, students at the usually sedate University of California, Davis – best known for agriculture and veterinary studies – were pepper- sprayed at close range by campus police as they sat silently in the quad, where they had pitched tents.

The police action was captured on video and seen by thousands. As a result, more than 43,000 people signed an online petition calling for UC Davis Chancellor Linda Katehi, ultimately responsible for police actions, to resign.

Two campus police officers involved in the pepper spraying were placed on administrative leave Sunday; an investigation has been launched.

According to Occupy UC Davis media liaison Chris, who didn’t want to give a last name, UC Davis students began the occupation Wednesday inside the administration building. University police forced them out of the building and they regrouped in the quad Thursday, where they set up around 20 tents.

On Friday, campus police attempted to clear the quad. “We prepared to meet them by forming a human chain,” Chris said. “The police started yanking students out of the chain; then spectating students joined.”

Then “one officer stepped over the students and pepper-sprayed them.” The pepper spray was administered at close range. The video shows the students screaming in pain. Two students were reportedly hospitalised.

Nine students and one non-student were arrested and released after about four hours, Chris said. Students from UC Sacramento are joining UC Davis students in a noontime demonstration in on the UC Davis quad Monday to oppose the pepper-spraying incident.

Reacting to the outcry, the 10-campus University of California President Mark Yudof issued a statement, likely referring to both the UC Davis and earlier UC Berkeley incidents of alleged police brutality.

“I am appalled by images of University of California students being doused with pepper spray and jabbed with police batons on our campuses,” he said, promising he would “protect the rights of our students, faculty and staff to engage in non-violent protest.”

Occupy UC Davis was born out of campus rallies opposing fee hikes, and students’ worsening educational experience, Chris said, underscoring, however that the issue is larger.