PAKISTAN: Beating the Taliban on the Playing Fields 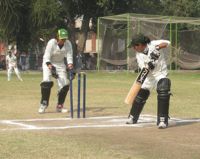 PESHAWAR, Nov 19 2011 (IPS) - An outbreak of sports fever has gripped the Federally Administered Tribal Areas (FATA) of Northern Pakistan, as increasing numbers of civilians and government officials latch on to team sports as their only armour against creeping militancy in the border region.

“Many young people have turned to sports to avoid falling into the hands of militants,” 16-year-old Abdul Shakoor, a resident of Mohmand Agency who led his volleyball team to victory in a recently concluded tournament told IPS.

The six-day tournament was organised by the Malik Saad Memorial Sports Trust as part of its effort to promote sporting activities in FATA to prevent youth, particularly young men, from being lured into the clutches of the myriad terrorist organisations in the region.

Since its establishment only 18 months ago in memory of police officer Malik Muhammad Saad Khan who was killed in a suicide attack in Peshawar in January 2007, the trust has elicited support from celebrated sportspersons such as former cricket legend Imran Khan and top tennis star Aisamul Haq.

Saad Khan, who laid his life on the line for the sake of peace, was a renowned lover of sports, believing sports to be the only path away from militancy.

“The government fully supports the trust’s efforts to promote sports in FATA because we see sportspeople as messengers of peace,” Akhunzada Chittan, a lawmaker from FATA told IPS.

Till now, FATA youth had almost no access to sports facilities, leaving them without a proper outlet for their energy and frustrations. Observers believe this gap was filled by the Taliban, who offered demoralised youth a chance for action.

“Now, we hope that the tribal youth will be able to take up a variety of games in their hometowns, which will not only keep them healthy but also keep them away from militancy,” Chittan said.

He added that young people in FATA have a natural aptitude for sports but soaring militancy coupled with extreme poverty has thus far kept them from excelling.

Now all that is changing.

Ten of these academies have already been completed, including three each in Khyber and Mohmand Agencies and four in Bajaur, while construction on 20 others is under way in Kurram, Orakzai and North and South Waziristan Agencies, he added.

So far, more than 12,000 youth have been enrolled in training centres across the region.

“The academies play a vital role in our society, as sport is increasingly becoming the only source of entertainment in this war-torn place,” Janat Gul, a schoolteacher in Bajaur Agency, told IPS.

The six-day cricket tournament that ended in mid-October proved to be a huge crowed-puller, Gul added.

“Now a football tournament is being organised, which we hope will be an even bigger success since the youngsters are so fond of football,” he said.

Shahid Shinwari, president of the FATA Olympic Association (FOA), is upbeat about young people’s future as a result of the setting up of these academies.

“In the spirit of promoting peace, the Pakistan Olympic Association formally endorsed us in February of this year,” he said, adding that huge demand from local players has resulted in plans for women’s sports as well.

She believes sports can be used to defeat terrorism in FATA, where militants have destroyed about 800 schools, most of them for girls.

The United States agency for international development (USAID) has financed the provision of clothes, as well as cricket bats, balls and other equipment to the players. “We are according priority to the areas worst affected by terrorism. For instance, the youths in Bajaur, Mohmand and Waziristan tribal agencies need the most urgent support,” Shinwari said. “The players in these regions are being given free bats, volleyball nets and balls, hockey sticks and a host of other supplies,” Aziz Malik said.