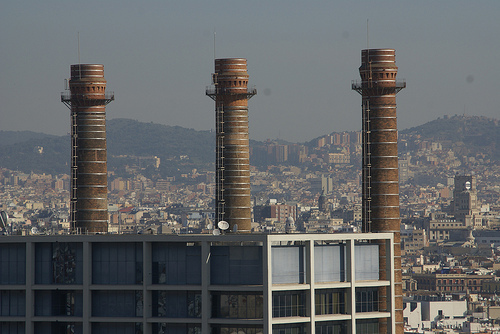 If business continues as usual, 227 Gt of CO2 will be emitted into the atmosphere between now and 2015. Credit: David Baron/ CC by 2.0

UXBRIDGE, Canada, Nov 24 2011 (IPS) - Global leaders will gather next week in Durban, South Africa to determine how to cap global warming at two degrees Celsius. This limit would entail de facto agreement to a global carbon budget of no more than 660 billion tonnes of carbon dioxide emissions between now and 2050, climate science says.

But at the current pace of emissions, countries will blow through the entire carbon budget before 2025.

After 17 years of negotiations, the 193 nations in the United Nations Framework Convention on Climate Change (UNFCCC) charged with developing a strategy to ensure global warming does not exceed two degrees Celsius have failed to curb the growth of carbon emissions.

In Durban, they will engage once more in what has ballooned into extraordinarily complex negotiations mired in political blame games and arguments over money.

No one thinks that situation will change anytime soon.

The window of opportunity to control carbon emissions and keep global warming below two degrees Celsius is fast closing, so the time has come for unconventional approaches, said Mutsuyoshi Nishimura, an ambassador and former negotiator for Japan.

Nishimura advocated a game-changing proposal based on an agreement for a global carbon cap, or budget, of 660 billion (also called gigatonnes, Gt) tonnes carbon dioxide (CO2) in total emissions between 2010 and 2050.

That carbon budget would then be auctioned off on the polluter pays principle, starting at 25 dollars a tonne, to finance new technology, adaptation efforts by developing countries and more.

“All CO2 emitting enterprises worldwide would buy allowances corresponding to the amount of CO2 they emit,” Nishimura told IPS.

That approach avoids various ‘you go first’ deadlocks. China, the largest emitter of CO2, refuses to agree to any limits on its emissions until after the second biggest emitter, the United States does. The U.S. continues to insist it won’t agree to a limit unless China does.

“We wouldn’t do it (agree to binding emissions commitments) if all the major economies weren’t also part of it in a quite full way. So in that sense, we would need to see that action from others,” said Todd Stern, U.S. special envoy for climate change at a press briefing Nov. 22.

Nishimura’s proposal is based on the well-established polluter pay’s principle: CO2 emitting companies either buy emission allowances or cut their emissions. It is simple, and it would work.

Climate scientists contacted by IPS agreed that a global carbon budget of 660 Gt is the best option if countries are serious about staying under a two degree rise in global temperature.

“From a science perspective, that would give us roughly a 75 percent chance of staying below 2C,” said Malte Meinshausen, a climate researcher at Germany’s Potsdam Institute for Climate Impact Research. Meinshausen’s research and an analysis were among the first to determine a carbon budget for limiting global warming to two degrees.

While the 660 Gt budget appears high, in 2010, emissions from fossil fuels and cement pumped another 33.5 Gt of CO2 – a six percent rise from the previous year – into the atmosphere, according to a recent study by Carbon Dioxide Information Analysis Centre at the U.S. Department of Energy.

If practices continue as usual, an additional 227 Gt of CO2 will be emitted into the atmosphere by 2015. That amount would mean more than a third of the two degrees Celsius budget gone in five years, with 35 years left for the remaining balance.

Current UNFCCC negotiations are unlikely to change this state. China will not agree to the idea of a binding cap on its emissions before 2015, said Alden Meyer, director of strategy and policy for the Union of Concerned Scientists.

But even getting China’s agreement will require significant changes in current U.S. policy, changes which are still years into the future, Meyer added. “No discussion of any particular cap will be on the table in Durban… no matter what the science says,” he told IPS.

Nor is the notion of a global auction of emissions rights on the table, said Meyer, who is familiar with Nishimura’s proposal.

Then there is the contentious issue of ‘historical’ emissions. Climate change is the sum total of all human emissions, as CO2 can stay in the atmosphere for centuries. Some of the current warming is from CO2 emissions 100 years ago.

Instead they will be compensated from the billions of dollars carbon-emitting enterprises will be forced to pay under the polluter-pays principle, he said.

A nominal price of 25 dollars a tonne, Nishimura estimated, would generate 625 billion dollars per year from 2010-2020.

Simple, but will these ideas gain traction?

“I don’t see it catching on”

No one IPS contacted believed Nishimura’s global carbon budget has any hope of being considered in Durban.

“It makes a very logical case for a rational global response to deal with a global problem like climate change,” said Saelemul Huq, a climate policy expert with the International Institute for Environment and Development in London.

“Its fatal weakness though is that (it) flies in the face of everything that has been done so far (albeit quite unsuccessfully) through the UNFCCC process,” Huq told IPS.

Nishimura said there had been some discussion around the idea of a global cap but acknowledged that “negotiators, experts and stakeholders of all sorts are all having their heads deep in the blinkered world of ‘national mitigation obligation’, ‘common but differentiated responsibilities’… to such an extent that newer ideas tend to be rejected”.

A complete breakdown of the UNFCCC process isn’t necessary for new ideas to emerge, he said. “The current national mitigation system (Kyoto) will never work, even if implemented.” That will create public demand for new solutions, he said.

“Unless there emerges some new coalition-of-the-willing to champion such a new approach, I don’t see it catching on,” said Huq.