BUENOS AIRES, Dec 9 2011 (IPS) - Argentina’s soy boom has been a major source of foreign exchange. But the other side of the coin is the toxic effects among the rural population, from spraying agrochemicals. 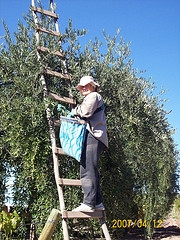 Research by the National University of Río Cuarto in the northwestern province of Córdoba demonstrated that glyphosate, the herbicide used on transgenic soy crops, causes genetic damage in mice and amphibians, like frogs.

Two years ago, another research study by Andrés Carrasco, a professor at the Molecular Embryology Laboratory of the University of Buenos Aires School of Medicine and principal researcher at the National Council for Scientific and Technical Research (CONICET), also demonstrated damage in amphibians.

Genetically modified (GM) soy seeds, approved amid controversy in the 1990s for use in Argentina, were developed by the U.S.-based multinational biotechnology corporation Monsanto to be resistant to glyphosate, the active principle in the “Roundup” herbicide sold by the company.

Introduction of the GM seeds launched an expansion of soy cultivation and increased use of glyphosate. Today, 18 million hectares are planted to soy, out of a total of nearly 30 million hectares of all kinds of grain crops.

In 2006, a group of NGOs with access to medical reports from provinces where soy cultivation was expanding, launched the “Stop the Spraying” (“Paren de Fumigar”) campaign, which managed to get an official commission created to look into the reports of health damages.

But the commission produced no results, and Monsanto insists that, with proper precautions, the herbicide is not toxic.

Delia Aiassa, a biologist in the Genetics and Environmental Mutagenesis group at the Natural Sciences Department of the University of Río Cuarto, leads a research team studying the impact of glyphosate on health.

The expert explained that exposure to glyphosate can cause asthma, chronic bronchitis, skin and eye irritation, damage to the kidneys, liver and nervous system, cancer, developmental problems in children and birth defects.

She also said that pregnant women are at greater risk of miscarriage, and in men fertility problems are more frequent, if they are exposed to the chemical.

Recently Aiassa published the results of her experiments in mice and amphibians, and her research team has carried out surveys in repeatedly sprayed areas which demonstrated the impact the herbicide has on human health.

Aiassa told IPS that mice and amphibians treated with glyphosate, in its pure form or as the commercial herbicide, mixed with additives, “had increased genetic damage to blood cells, bone marrow and liver.” At higher doses, the animals died.

At the request of small towns in Córdoba that are surrounded by soy plantations, the multidisciplinary team carried out “human monitoring” to study the use of herbicides and pesticides from the vantage point of those directly involved.

In Rincón de los Sauces, in Córdoba, where 34 families are surrounded by large soy fields, 34 percent of respondents said that the area round their homes was repeatedly sprayed.

Fifty-three percent of those interviewed said they had never received any information about risks posed by the misuse of agrochemicals, and 35 percent reported symptoms of poisoning (of whom 83 percent worked as sprayers in the fields).

Similar results were obtained by the team in other small towns like Las Vertientes, Marcos Juárez and Saria in the same province. The experts also found “a lack of medical records reflecting the ailments experienced by local residents.”

This shortcoming was highlighted by Dr Damián Verzeñassi, academic under-secretary of the School of Medical Sciences at the National University of Rosario, in the northeastern province of Santa Fe.

Aiassa and Verzeñassi gave a talk for health workers Dec. 6 at the Juan Garrahan Paediatric Hospital in Buenos Aires, where severely ill children from all over the country are treated.

“One cannot keep thinking about human health as though it were unconnected with the health of ecosystems,” Verzeñassi said in his talk, warning of the health effects of a model of production based on large-scale production of transgenic soy.

Verzeñassi told IPS that because some health impacts only appear a considerable time after exposure to an agricultural chemical, it as essential for doctors in affected areas – and at the Garrahan hospital – to keep patient records.

“Case-based reasoning is a key tool in these situations, but it requires reliable case histories from which to gather data to visibilise the problem,” the doctor from Rosario told his colleagues.

IPS asked him about the trial to be held next year in Córdoba province against two agribusiness producers and the pilot of a crop duster plane, for illegal spraying of glyphosate in the vicinity of the village of Ituzaingó and for damages caused to the local population.

In Verzeñassi’s view, the trial is “very important” to establish criminal responsibility in the case. He regretted that a group of women from Ituzaingó had to push hard for prosecution to go ahead, instead of the public health system performing that duty.

In spite of loud demands, there is no national law to regulate agricultural chemicals in Argentina. There are regulations in the provinces and in some municipalities, which are permissive to different degrees and are not always enforced.

Among the doctors attending the talk was the head of Oncology at the Garrahan hospital, Pedro Zubizarreta. He told IPS that one-third of the country’s child cancer cases – usually the most severe – come for treatment to the Garrahan.

“We can’t prove an increase in cancer cases associated with glyphosate use, because we don’t have enough detailed records, but what matters is that an agricultural chemical that causes harm is being used on a massive scale,” he said.

“We might not be able to demonstrate today that this causes more child cancer, but we do know it is bad for our health and that of our children, and it has an enormous effect on biodiversity and the variety of our foods,” he stressed.

The concern expressed by doctors and scientists echoed those of people in Chaco province in the northeast, where IPS covered a debate among the participants at a Women’s Hearing for Climate Justice, held in October, which focused on agricultural chemicals.

“They ruin the earth; people around here can’t plant any crops because they all wither. They spray toxic chemicals alongside our crops, and the wind burns them all up,” Juana Ozuna of the small farmers’ organisation in Colonias Unidas, Chaco province, told IPS at that event.

“We don’t have much education, but we can see that it does harm, because we can’t keep animals or have a vegetable garden, the water is polluted and there are pitiful cases of deformed babies,” she concluded.