At the Nexus of Agrofuels, Land Grabs and Hunger – Part 1 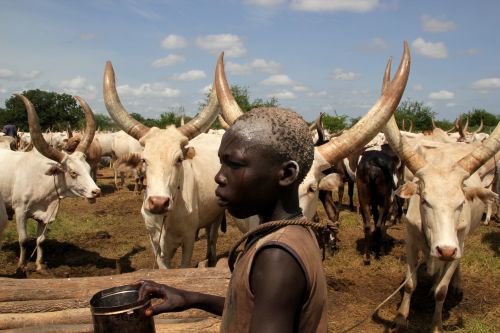 A member of the Mundari tribe stands amongst cattle in Terekeka, South Sudan. Credit: Jared Ferrie/IPS

WASHINGTON, Dec 6 2011 (IPS) - While the United Nations climate talks in Durban enter their ninth day of political feet-dragging, researchers and peasants around the world are busy connecting the dots between so- called “green climate solutions”, industrialised agriculture and chronic hunger.

New research released Tuesday by the U.S.-based Oakland Institute (OI) reveals the nexus between “false” fuel alternatives such as the development of agrofuels and agroforests and the massive land grab underway in Africa that is stripping thousands of peasants of their land and means of subsistence.

The research cites the hypocrisy of major industrialised actors like the U.S. and the European Union, as well the World Bank Group (WBG) and other development agencies for pouring money into assisting victims of famine and natural disasters, all the while making massive investments in schemes that heat the earth and stifle local development.

Industrial agriculture and biofuels: neither clean nor green

Industrialised agricultural practices currently produce 13.5 percent of all green house gas emissions, mostly methane and nitrous oxide. The latter is emitted in huge doses through the spraying of fertiliser, which is used 800 times more frequently today than it was 100 years ago.

The production of fertilisers themselves requires the burning up of fossil fuels, emitting up to 41 million tonnes of carbon dioxide (CO2) annually according to the U.N. Food and Agricultural Organisation (FAO).

And yet, powerful governments like the U.S. and various players from the eurozone, together with the WBG, continue to advocate for the proliferation of agrofuels, which employ the same dirty, large-scale farming techniques described above, as a “green solution” to the climate crisis.

In fact, the production of mono crop agrofuels guzzle thousands of gallons of freshwater, are processed into biodiesels – the very products that have overheated the planet to begin with – and create long, oil-thirsty transport chains to carry the product. The OI report estimates that the “conversion of rainforests and native grasslands into fields to produce agrofuel crops will release between 17 to 420 times more CO2 than the amount of greenhouse gas emissions that would be reduced following the replacement of fossil fuels with agrofuels. The increase in agrofuel use may release between 44 and 73 million additional tons of CO2 equivalent per year.”

The U.S. alone has vowed to increase its use of agrofuels by 30 percent in the coming years.

According to OI’s research, five million hectares of land throughout sub-Saharan Africa are currently under cultivation for agrofuel crops like palm trees and eucalyptus, in a multibillion dollar scheme that profits major transnational corporations and their government allies.

“We were also shocked to find, during our research, several Scandinavian churches making land investments in countries like Mozambique, in schemes that involved thousands of hectares of illegally acquired land,” Frederic Mousseau, the policy director of OI, told IPS.

“We have come to expect this from hedge funds, but not from churches,” he added.

“The emergence of carbon trading and carbon markets has also been a major factor in the land grab, with carbon credits being touted as a green solution to the problem of carbon emissions,” Mousseau added.

In fact, “the trade in carbon credits involves corporations and governments buying and selling credits in one part of the world in order to continue polluting domestically. Carbon trading not only assigns rights to developed countries and corporations to pollute, but also represents what some are calling “global climate malgovernance”,” according to the report.

“Since this is a relatively new phenomenon, we have not yet seen all possible manifestations of the problem,” Moussa told IPS. “All we know for sure are the immediate negative consequences of this practice such as investors planting non-native crops which destroy the local environment, replacing rich grasslands with mono crops and denying indigenous groups their rights to land and their traditional practices that respect biodiversity.”

David Deng, research director of the South Sudan Law Society, told IPS, “In South Sudan, government officials rarely know what biofuels are, much less carbon credits. As a result, they are often willing to give away these rights for free.”

“For the time being, the uncertainty of the transitional context has prevented companies from beginning operations but if these “green” deals (carbon credits and agrofuel projects) in the newly established South Sudan move forward, we will see a massive transfer of wealth from landowning communities in South Sudan to transnational companies in the global North,” he added.

Meanwhile Green Resources Ltd, a Norwegian timber company, has embarked on a plan to replace nearly 7,000 hectares of natural Tanzanian grasslands with monocultures of pine and eucalyptus, destroying the local biodiversity, displacing smallholders and burying jobs.

The loss of local employment has been a particularly thorny issue in Sierra Leone, where investments by the Socfin Agricultural Company in the Pujenhun district have marginalized workers in the area.

“Older people who have lost their land are not employed and women have to leave their homes as early as 4:30am to queue for daily wage jobs, which they seldom get,” Joseph Rahall, the director of Green Scenery in Sierra Leone, told IPS.

“Vast tracks of land are now being cleared to make way for oil palm monocultures, which cannot be compared to a biodiverse flora. Families from the upland farms used to grow multiple crops capable of absorbing the shocks of food scarcity but many of these families have stopped planting for fear that multinationals will occupy their land,” he said.

“Community members who were peacefully protesting the illegal occupation of their land were arrested and are now facing trials in court. The Northern countries’ preference for biofuels has deprived countries like ours of basic human security,” he added.

*This is the first of a two-part series on biofuels, industrialised agriculture and hunger.