ECONOMY: Argentina Shows World How to Beat the Crisis

BUENOS AIRES, Dec 19 2011 (IPS) - What is happening in the European Union and the United States today happened a decade ago in Argentina, when it was a hotbed of protest and the streets of major cities were seething with people telling their leaders they had had enough. And then a new story began to be written. 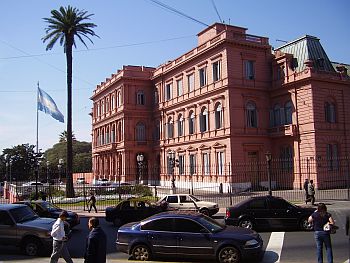 Argentina's government house, in peaceful contrast to the crisis days of late 2001 when it was surrounded by thousands of angry protesters. Credit: Marcela Valente/IPS

The historic protests of Dec. 19-20, 2001 in Argentina left 40 people dead and many injured. They were the consequence of years of recession and public indebtedness that led to economic collapse and the skyrocketing of unemployment and poverty to levels never before seen in the country’s modern history.

“The 2001-2002 crisis was the result of adjustment policies prescribed by the International Monetary Fund (IMF) in the 1990s, the same policies that are driving Europe’s present situation,” sociologist Norma Giarraca told IPS.

Giarraca, of the Gino Germani Research Institute at the University of Buenos Aires (UBA), is a co-author of “Tiempos de rebelión: ¡¡Qué se vayan todos!! (Times of Rebellion: They Must All Go!), a book on the social movement that arose in the heat of the 2001 economic, social and political meltdown.

The mass protests that broke out after three years of recession, deep spending cuts and growing indebtedness triggered the December 2001 resignation of centrist president Fernando de la Rúa, half-way through his four-year term. Over the following 10 days, four interim presidents were designated in rapid succession.

Meanwhile, the poverty rate soared to over 52 percent of the population, and unemployment climbed to 24 percent. The airports were crowded with people leaving the country, especially young people.

The protests crossed social class barriers: middle and upper-income groups demanded access to their savings, trapped in bank accounts by government restrictions on cash withdrawals known as the “corralito”, while the poor looted supermarkets in order to survive.

Argentina then defaulted on a large part of its foreign debt, to the consternation of financial operators at home and abroad, and the president designated by Congress, Eduardo Duhalde, dismantled the “convertibility” regime that had pegged the peso to the dollar for nearly a decade.

Currency devaluation and debt restructuring, along with a highly successful treasury bond swap with large capital discounts and longer terms, paved the way for the recovery of the country from 2003, when president Néstor Kirchner took office for four years. The leader of the centre-left sector of the Justicialista (Peronist) Party, he died in October 2010.

Since that time the Argentine economy has grown steadily at between seven and 10 percent of GDP a year, except in 2009 when economic growth was only 0.9 percent, due to the impact of the global economic and financial crisis that broke out in 2008 in the United States.

The country’s economic performance and a range of social programmes implemented by Kirchner, and from 2007 by his wife and successor, President Cristina Fernández, have brought down poverty and unemployment rates to below 10 percent.

Giarraca told IPS that Argentina “is better off because the economic variables were managed correctly” and has benefited from high international prices for commodities, the country’s main export.

But in her view, there was little progress on the political front. “People were fed up and disillusioned with politicians, and expressed this on the street with the slogan ‘they must all go’. They were demanding a renovation, which has not happened,” she said.

Today there is stability, many young people are politically active, and the majority of voters are satisfied with the status quo as demonstrated by the October re-election of President Fernández, with 54 percent of the vote. But the demands for direct democracy and greater participation have gone unheeded, Giarraca said.

The undercurrent of rebellion persists, she said, and finds expression in local neighbourhood assemblies in the country’s provinces, held to protest the activities of the mining industry, which pollutes the environment without benefiting local communities.

In the industrialised countries, the crisis derived from unsustainable indebtedness is being combated by the political and economic leadership with deepening cuts in government spending and social benefits, causing growing social malaise.

Movements like the “Indignant” or May 15 (15-M) movement in Spain or the Occupy movements in the United States and Canada evoke the late 2001 street protests in Argentina, which were also self-organised and independent of social and political organisations.

“Something of the profound dissatisfaction that we experienced in 2001 is being expressed today in Europe. The welfare states of the 1970s have been eroded, and the culture of neoliberal capitalism impinges on every aspect of life,” Giarraca said.

Economist Julio Gambina, head of the Social and Political Research Foundation and a member of the Latin American Council of Social Sciences (CLACSO) and ATTAC Argentina (the Association for the Taxation of Financial Transactions and Aid to Citizens), concurs.

In Gambina’s view, “Europe should look at itself in the mirror of the 2001 crisis… Argentina arrived at an explosive situation because of the same liberalisation, privatisation and adjustment policies that the IMF and the European Central Bank are recommending” for European countries today.

According to Gambina, the crisis in Argentina was resolved by “relaunching capitalism” in two stages: on the one hand, suspending payments on the debt, and on the other, devaluing the currency, which made exports more competitive.

“Capitalism in Argentina recovered its capacity to operate and accumulate profits, and social indicators improved, although not to the levels of the 1960s and 1970s, before the adoption of neoliberal policies or unbridled capitalism,” he told IPS.

This strategy for overcoming the crisis, which is being recommended for Europe by economists like former head of the World Bank and 2001 Nobel Prize-winner Joseph Stiglitz, “is not such an easy model to copy,” Gambina said, and not just because of the constraints imposed by having a single currency, the euro, in many European countries.

“It’s not that simple, because even if you could return to the former national currencies and devalue them, countries like Greece or Spain do not possess the range of exportable natural resources that we have in Latin America,” Gambina said.

According to his interpretation, Europe should look at the ongoing process in Latin America, which on the political level is trying to free itself from the hegemony of the United States through its new integration structures, like the Community of Latin American and Caribbean States (CELAC), officially launched early this month, which does not include the U.S. or Canada.

“Europe ought to think of a way of reconstructing itself without the hegemony of Germany and France,” which according to Gambina are leading the region into greater austerity and more suffering for growing sectors of the population.