TORONTO, Dec 12 2011 (IPS) - Canadian cooperatives may grow as the global Occupy movement raises the profile of their business model through boosting interest in credit unions over traditional banks, but uncertainty remains about the degree to which the two camps will join forces from here on. 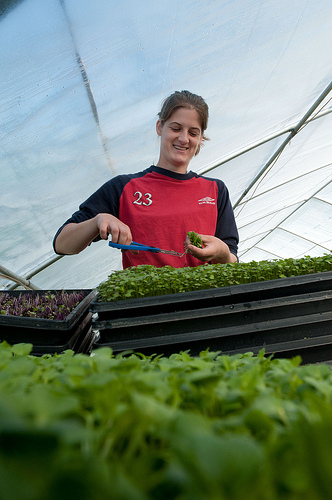 Cooperatives have grown in prominence, in part due to the Occupy movement, but how closely the two can coordinate remains to be seen. Credit: U.S. Dept. of Agriculture/ CC by 2.0

While the cooperative sector understands that the international Occupy trend illustrates a “huge appetite” for an alternative to the economic and social status quo, it is unclear to what extent co-op groups will respond to this swell of emotion, John Restakis, executive director of the British Columbia Cooperative Association in Vancouver, told IPS.

Co-ops are vocal about representing a different and successful way of doing business but are more reluctant to declare their identification with the “quite radical” Occupy movement, Restakis said.

These businesses have thrived because they are risk-averse, conservative and inclusive – a culture running counter to Occupy sentiments, he noted. Large co-op groups are more established, have a more diverse membership and lack the solidarity to take positions on issues.

Their smaller, younger and more activist counterparts, however, would be interested in forging a connection with Occupy groups because some of their members are probably part of the international phenomenon, he added.

Virtually every sector of the Canadian economy dots the co-op landscape, including agriculture, retail, housing and healthcare, and at least 10 million people (out of a population of 34 million) are members of some form of cooperative, according to the Canadian Cooperative Association in Ottawa.

As co-ops grapple with how to approach the Occupy wave, one thing is certain, according to Restakis: There is a need for dialogue between the two, despite their deep differences, because much can be learned and shared.

Occupy supporters can act as a “new generation of activists and people that are committed to social, economic justice” and can “re-tell the co-op story from the perspective of young people”, he argued.

This support would be advantageous to the cooperative sector because it challenges well-entrenched organisations to take a “cold, hard look” at their values and understand that they are part of a broader movement and not merely a business model, Restakis said.

As Occupy mania shifts more of the world’s attention to co-ops, it will inevitably shine a light on the flaws of the business paradigm but could perhaps help resolve them as well.

Recent Canadian Cooperative Association research carried out in Ontario, as well as decade-old surveys in B.C., indicates that Canadians have low awareness of co-ops even though they may belong to one such as a credit union or the well-known Mountain Equipment Co-op, Restakis said.

Weak recognition shows that the co-op model is not effective in explaining to Canadians that there is another way to conduct business outside of the public and private spheres, he said.

When co-ops in North America and Europe have made an effort to brand themselves as a different kind of enterprise, such as the Canadian insurer, the Co-operators Group and Gay Lea Foods, doing so has increased their market share and helped them economically, he added.

In the coming years, baby boomer owners of small- and medium-sized businesses will be retiring and there are fears that buyers will be too few to continue the co-op legacy.

Co-op leaders tend to be older and have not engaged adequately with youth to address business-succession concerns, added Donna Balkan, communications manager of the Canadian Co-operative Association.

To this end, the Canadian Worker Co-op Federation is implementing mechanisms to assist with promotional activities, technical issues and capital for employees interested in acquiring co-ops, Corcoran said.

One challenge in the Canadian provinces outside of French-speaking Quebec, where the co-operative movement has extensive roots, is a lack of support for business succession in co-ops, she added.

As a result, her federation is working with the Canadian Co-operative Association to put resources like funding and tax legislation into place to enable workers keen on taking over baby boomers’ businesses.

“It’s a lot harder to get access to financing, especially for smaller and newer co-ops,” Balkan told IPS. In general, cooperative organisations cannot tap into the stock market but can take out loans from credit unions or banks, she said. “It makes it harder to grow.”

The Canadian cooperative movement has also succeeded in notable ways, which the Occupy camp can highlight if it eventually forges close connections with co-ops.

For example, co-op groups play a leading role in environmental sustainability, because one of their guiding principles is community concern, Balkan said.

Outdoor retailer Mountain Equipment Co-op has paved the way in constructing new buildings with the environment in mind and drawing up internal policies on recycling, while the Co-operators insurance company has teamed up with the David Suzuki Foundation to create youth internships on environmental sustainability, she said.

Investor-owned businesses and other companies have followed suit, Balkan added, through the adoption of corporate social responsibility policies designed to give back to communities in which they operate.

In addition, the recent financial crisis has proved that cooperatives’ solid financial management skills were what allowed them to weather the global turmoil, Balkan noted. Co-ops tend to be prudent, which ultimately means they grow more slowly, produce smaller profits, and take fewer risks than firms driven by profit, she explained.

Balkan said the money co-ops earn is then invested in people, the local communities and businesses.

Another situation co-ops may help to alleviate is people’s sense of powerlessness over their economic destiny, laid bare during the weak financial climate of the last few years. As democratic, member-owned entities, cooperatives directly engage people in charting their own economic futures.

Already, the Canadian Worker Co-op Federation is pitching the worker co-op model to young people who are keen to create their own employment with others and are “looking for more democracy in the economy”, said Corcoran, the executive director.