SOUTH SUDAN: Women Aim to Protect Their Rights in a Young State 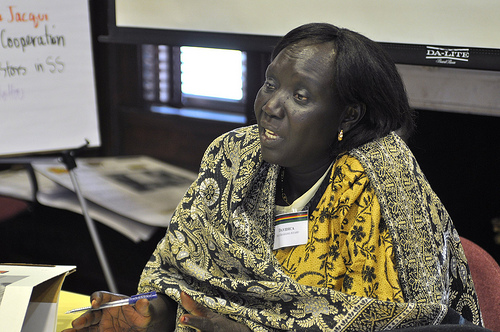 Davidica Ikai Grasiano Ayahu of the ITWAK Organisation addresses a working group on the specific medical needs of women in South Sudan. Credit: Shereen Hall, courtesy of the Institute for Inclusive Security

WASHINGTON, Dec 15 2011 (IPS) - As South Sudan maps out its economic future at the South Sudan International Engagement Conference (IEC) this week in Washington, women from the new country called on donors to invest in projects that ensure women benefit equally from development plans.

Pointing out that women played a critical role in the referendum that made South Sudan an independent country in July – 52 percent of voters in that referendum were female – South Sudanese women pushed for measures that would help secure a strong female presence in sectors including government, agriculture and the economy.

The IEC, organised by the U.S. Agency for International Development (USAID), brought together government leaders from South Sudan with a group of rich states, foreign aid groups and private investors to develop a South Sudan Development Plan, a blueprint for the young state’s social, economic and political policies.

Groups included the International Finance Corporation, the World Bank, the United Nations, the European Union, the African Union, the Corporate Council on Africa and InterAction. Officials from the United Kingdom, Norway and Turkey were also present.

The conference, which concludes today, is taking place amid continuing violence in the still-contested border states of Southern Kordofan and Blue Nile.

North Sudan charges that the Sudan People’s Liberation Army is supplying rebels in the two states with weapons while international human rights groups claim that the North is indiscriminately bombing civilian populations in the two states and denying humanitarian relief agencies access to the region.

As the IEC continued in Washington, South Sudanese women delegates urged those present to acknowledge the role women play in peace building and their right to a seat at the table in planning the country’s future.

The women recommended ensuring that 25 percent of all investments in agriculture and commercial livestock go to women, thereby “increasing their food productivity, their entrepreneurship, and access to markets.” The large majority of farmers in South Sudan are small women farmers, and war has left South Sudan with a large number of female-headed households.

“We want aid to target women specifically,” said Sarah James, a women’s rights activist and chairperson for the South Sudan Women General Association. “We can’t assume that it will reach them.”

James, speaking to a large crowd of investors and foreign development aid donors gathered on the first day of the conference, urged them to consider women as equal partners in sustainable peace and development in the country.

The Institute for Inclusive Security, together with U.N. Women, hosted a gender symposium preceding the IEC where the women sketched out their recommendations. The symposium marked an effort to facilitate South Sudanese women’s access to decision-making about the future of the new country.

The effort is significant because according to the Institute, post conflict recovery and private sector development in other countries where wars have ended have “most often returned power and economic opportunities to male elites”.

The women’s recommendations include a plan to double women’s literacy from 12 percent to 25 percent as well as earmarks to ensure half of the oil revenues allocated to communities through community development funds go to women’s health, economic and physical security.

Also proposed was a plan for a women’s bank with start-up capital of 10 million dollars to provide women with accessible, low interest loans for their own business ventures.

“People are bringing home the experiences they got in other countries during their displacement,” said Mary Kojo, who herself was displaced for a time in Khartoum. She currently works with the Ministry of Gender, Child and Social Welfare and has worked to build women’s small-scale businesses.

Women are well-qualified to work in every sector of South Sudan’s development, she pointed out. “We have the capacity. It’s only that we are not being given the opportunity,” Kojo told IPS. “That’s why we are here – we want our voice wherever men have a voice.”

The list of South Sudanese women’s priorities includes basic services, better schools and better hospitals. With one out of seven pregnant women dying due to pregnancy-related causes in South Sudan, according to the U.N., the room for improvement is significant.

Women delegates also said small loans for South Sudanese women could help increase female farmers’ participation at food and vegetable markets, a sector where women from the neighbouring countries of Kenya, Ethiopia and Uganda currently dominate because of their access to start-up capital, the women told IPS.

The women also urged the government to continue to implement the 25 percent quota currently in place for women at all levels of government.

This conference is the first of its kind, known in the aid world as a “donor conference”, to include women from civil society in all sessions, including planning sessions for the management of oil revenues, social service delivery, governance and environment.

Anne Marie Goetz, chief of the peace and security program at U.N. Women, said including women in development planning makes sense, not only from a rights standpoint, but also economically. The agricultural sector is just one example.

“Investing in women’s agricultural production is a way of ensuring rural market development and community stability because women invest in their communities,” Goetz said. She said statistics show that women invest 90 percent of their income on family well-being compared to the 40 percent that men invest.

But why did it take so long to include women? Goetz said it is because the international community has itself been slow to acknowledge that women have specific priorities and perspectives that are inadequately reflected by governments.

Goetz told IPS, “There is now a growing recognition that you cannot build good governance and sound economic foundations without involving half the population.”