DURBAN, South Africa , Dec 6 2011 (IPS) - Sweden, the United Kingdom and Germany are the top countries to fight climate change, according to the 2012 Climate Change Performance Index, whose results were published at the United Nations climate change summit today. 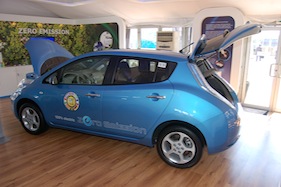 Sweden, the country with the lowest emission levels of 50,600 tonnes of CO2 emissions, according to the latest data from the United States Energy Information Administration (EIA), and good emission trends worldwide, was ranked 4th.

Experts said they could not award any country with the top three rankings, as no nation was doing enough to prevent climate change.

The three lowest-ranking countries are Saudi Arabia, Kazakhstan and Iran. The index is compiled each year by environmental lobby organisation Germanwatch and the Climate Action Network (CAN), which evaluate and compare the climate protection performance of the 58 countries worldwide which are together responsible for more than 90 percent of global energy-related CO2-emissions.

“This year’s results signify that although globally emissions are still growing, none of the big emitters make the real shifts that are needed,” said CAN Europe director Wendel Trio. “None of them is considered as doing enough.”

Sweden’s climate policy was not ambitious enough, while the UK, ranked 5th, had recently shown worrying signs. It had failed to tighten up its carbon budgets, while Germany’s emission levels remained too high for a placement higher than rank 6.

“The average grades for the national and international policies are weak,” said Germanwatch researcher Jan Burck, one of the authors of the report. “Most experts are not satisfied by far with the efforts of their governments with regard to the 2°C limit”, which refers to the rise in global temperatures that scientists have found may not be exceeded if they world wants to win the fight against climate change.

However, within Europe, countries such as Turkey (58), Poland (56) and Croatia (53) hold some of the lowest positions in the overall ranking. This is partly due to their policy evaluations. During its presidency of the European Council, Poland blocked the proposed European Union’s 30 percent reduction target until 2020, for example. Poor emissions trends and poor policy evaluations made the Netherlands (42) lose twelve ranks.

“It is especially worrying that global trend towards burning coal (and oil from tar sands) has not been stopped,” warned Burck. “This is the main reason why we see emissions per gross domestic product (GDP) increasing in many countries.”

Switzerland was ranked 9th, after Brazil and France. Brazil, which used to be among the role model countries, has lost its top ranking because of increasing carbon emissions as well as emissions from deforestation.

The United States has climbed up two ranks to 52, mainly due to its reduction in emissions as a result of the economic crisis. It remains, however, at the bottom end of the index because of poor policy evaluations and a very high emissions level.

Emerging economy India dropped 13 ranks because of a worse overall performance, especially in terms of its emissions trend.

“The index provides hard data and trends in the context of climate negotiations that often remain vague. We hope countries use the index as a motivation to increase their ambitions to fight climate change,” said Trio.

China’s climate performance is full of contradictions, the authors said. While China is the world’s largest CO2-emitter, producing 7.7 million tonnes of CO2 according to the EIA, and with dramatically growing emissions, its national emissions reduction policy is rapidly intensifying.

“China is installing about half of the global renewable energy capacity per year,” said Burck. He expects China’s ranking to “dramatically improve” as soon as these positive trends will influence its emissions trend.

China, Mexico, Korea and South Africa are the countries with the best policy evaluation. South Africa has been showing an improved performance in the field of national climate policy each year, but is only ranked 38 because their emissions are still relatively high and the country remains addicted to coal.

Australia has made encouraging steps towards improved climate policy and climbed ten ranks. The experts recognised its new carbon tax as especially positive. But due to its continuously high emissions, the country remains in the last quarter of emitters, on a poor rank 48.

Despite the low ranking, “Australia shows a very positive trend,” said Trio. “It only joined the Kyoto Protocol in 2007 but now adopted important new policies to reduce carbon emissions.”

The countries with the worst score in the indicator ‘emissions levels’ are Kazakhstan, Saudi Arabia and Estonia.