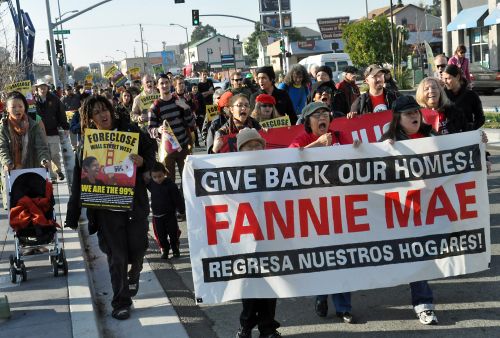 People march through West Oakland to the foreclosed home now owned by Fannie Mae that will be occupied as a community centre. Credit: Judith Scherr/IPS

OAKLAND, California, Dec 7 2011 (IPS) - Five months ago, Gayla Newsome was at work when she got the call. A sheriff had come to her home of 15 years and put her two pajama-clad daughters out on the curb of her West Oakland street. Newsome knew the bank was about to foreclose, but thought she still had time to fight it.

On Tuesday, she marched in triumph back to her former abode – along with some 75 supporters. It was Occupy Our Homes Day across the nation, feted by Occupy organisations in more than 20 cities; it was a day to condemn the bank seizure of more than one million U.S. homes in 2010.

Newsome’s home will be occupied 24/7 by volunteers from Occupy Oakland and the Alliance of Californians for Community Empowerment.

“I’m here to reclaim what belongs to me and to the community,” Newsome said, standing in front of the home, as a masked man affixed a “Save Gayla’s home” banner to the front of the two-story townhouse.

The day of actions marked a new direction for Occupy Oakland and many other Occupies which have been chased from their tent cities. Their decision to use a “diversity of tactics” can translate into occupying a foreclosed house one day or calling a general strike the next – whatever they can do to continue to shine a glaring light on what the Occupy Oakland General Assembly has called “a deliberate Wall Street strategy that has made billions for those at the top while devastating the 99 percent”.

On the coast in Santa Cruz, a town of about 60,000, a group of protesters, independent of Occupy Santa Cruz, entered a former bank building on Nov. 30, but after negotiations with police, left peacefully four days later.

They intended to turn the space into a community centre –and to make the point that unused private space should be reclaimed for public use. A few blocks away, another Santa Cruz group transformed a privately-owned vacant lot, unused for at least 20 years, into a community garden with benches, native plants and fruit trees.


The housing crisis in Oakland has reached crisis proportions. Between 2006 and 2009, 14,941 property owners in Oakland received a notice of default on their mortgages – that’s about one in four homeowners, according to the 2010 report, “Rebuilding Neighborhoods, Restoring Health: A Report on the Impact of foreclosure on public health”, authored by Causa Justa:: Just Cause and the Alameda County Health Department.

“Unfortunately, the situation is poised to get worse as more adjustable rate mortgages reset, unemployment rates remain unabated, and subprime lending persists, particularly in communities of color,” the report says.

Before marching the half-block to her foreclosed home, Newsome, who is African American, addressed supporters at Defermery Park, underscoring the legacy of activism in Oakland, and noting in particular that Defermery Park was a significant gathering place for the Black Panther movement.

Newsome talked about losing her home. After losing a job and falling behind in her mortgage, she tried to work with Chase Bank for a loan modification.

Finally, the bank turned down the modification and foreclosed on the property, which is now advertised as “WONDERFUL FAMILY HOME IN FENCED COMMUNITY; 3 BEDROOM, 2.5 BATHS IN MOVE IN CONDITION. MUST SEE!!!!” Newsome said saving her home was more than trying to help her family – it was part of stopping the rapid gentrification of West Oakland. “I’m not just here personally to reclaim my house,” she said, “I’m here to encourage people to reclaim this community.”

Earlier in the day, about a mile from Newsome’s home, Nell Myhand from Causa Justa addressed a crowd at the West Oakland subway station. Putting the housing crisis into perspective, Myhand condemned the federal government for disinvestment in affordable housing.

“For the last 30 years, they have neglected public housing (and) failed to put any pressure on developers around affordable housing,” she said. “That set us up for the banks to then target us for predatory loans.”

These sub-prime loans were directed to black, Latino and elders in three East Oakland neighbourhoods, and “cost our communities wealth and even our health,” she said.

Stress, blight and crime are just some of the consequences foreclosures have on entire neighbourhoods, further devastating communities of colour “that have suffered from decades of policies rooted in discrimination”, says the “Rebuilding Neighborhoods” report.

Margarita Ramirez’s family also suffered a foreclosure. Speaking in Spanish, with English translation, she addressed the crowd at the subway station, explaining that in 2009, her husband lost his job and consequently the family was unable to make house payments. They lost their East Oakland home.

They applied to Fannie Mae through the Bank of America, which serviced the loan, for a modification. But after submitting a series of documents, which the bank would lose time and again, Fannie Mae ultimately turned down the requested modification.

Ramirez explained that Occupy Oakland and the housing organisations plan to occupy a vacant home near the West Oakland station owned by Fannie Mae. “We’re here to reoccupy Fannie Mae homes until they give us our home back,” she said.

In both the Ramirez and Newsome cases, the need to modify the terms of a loan came as a result of a period of unemployment.

“What has fueled the foreclosures in the last year and a half or so, has been the massive unemployment,” said Robbie Clark of Causa Justa, co-author of the “Rebuilding Neighborhoods” report.

Chanting “ain’t no power but the power of the people and the power of the people don’t stop,” the group of around 100 people left the subway station and marched three blocks to an unoccupied, foreclosed home owned by Fannie Mae. Activists decorated the home with placards such as “Give Back the Deed/Regresen El Titulo” and “welcome home.” They plan to turn the 121 year-old building into a center for classes on tenants’ and homeowners’ rights – in fact they had workshops scheduled for late afternoon. And they also said they would use the property for low-income housing.

On Saturday in San Francisco, homeowner and tenants rights activists took to the streets with marches in four communities coming together downtown to target the banks they blame for foreclosures. About 100 people rallied in the heavily-Latino Mission District.

Tenants spoke about how they were being pushed out by “Ellis Act evictions,” that is landlords who evict tenants when they quit the landlord business. These landlords can circumvent rent control and profit by turning their apartment buildings into condominiums.

“My entire family (grandparents, aunts, cousins) has lived together for more than 27 years,” Brenda Medina tearfully told the gathering in the Mission. “With rents being so high, we might be forced to move outside San Francisco,” and they may have to break up the mutually dependent family unit of several generations.

Wednesday morning at 2:18 a.m., the Occupy San Francisco communications team sent out a message saying the San Francisco encampment was being raided by police.