ATHENS, Jan 20 2012 (IPS) - As the Eurozone falls deeper into its sovereign debt crisis, the labour movement in Greece is being cudgelled to its knees by an austerity programme that has so far failed to bring any positive change for the crumbling Mediterranean country. 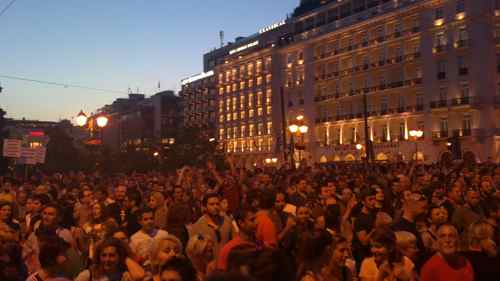 While the government slowly tightens a noose around public spending in what many economists have deemed a misguided effort to stem runaway debt, Greek workers are being stripped of their few remaining protections – a move experts see as signalling perennial deterioration of the economy.

The government now plans to cut private sector workers’ wages and deny the salary increases promised in the National Collective Contract for next summer in an effort to settle its 14.4 billion dollar debt with international donors by March 20.

Union leaders and renowned economists like Giannis Milios, a professor at the polytechnic school of Athens, have dubbed the move “evidence of big businesses’ desire to brutally deregulate” the labour market.

Meanwhile Greece is expected to complete a debt forgiveness and bond exchange negotiation (PSI) with private debt holders and implement measures agreed upon last year with the European Central Bank, the International Monetary Fund and the European Commission (otherwise known as the troika), before becoming eligible for further monetary assistance in 2012.

Without this ‘bailout’ money Greece will be unable to pay next March and likely become mired in a vicious cycle of debt default.

The first to come out in favour of rapid implementation of the reforms requested by the troika was Loukas Papadimos, a European Central Bank technocrat who took control of the coalition government last November and is now rushing ahead with wage cuts, despite the fact that numerous analysts, including experts from the International Organisation of Labour, have dissociated labour market reforms from the success of the structural adjustment plan.

Christina Kopsini, a working relations and labour market analyst, thinks Greece’s current deference to the free market is largely a political game, one that will lead to a compromise in the short term since “nobody is ready to risk crossing the Rubicon of default yet.”

She told IPS that while the government and private sector jostle each other over the margin of debt forgiveness, Greek workers will bear the brunt of the crisis by being forced to concede more of their rights and meagre incomes.

“It is noteworthy that the only austerity measures implemented without delay over the last two years are those deregulating the labour market and abolishing basic legislation protecting workers,” she observed.

Despite a massive public outcry against such a blatant violation of labour rights, Papadimos’ cabinet has admitted that it is prepared to bypass the parliament in order to enforce the wage cuts.

He also openly blackmailed unions and business associations alike by threatening to hold them accountable for Greece’s bankruptcy if they failed to comply with the wage cuts, which he claimed are “the only way to save the country.”

Papadimos’ decision to remain loyal to corporate interests rather than standing by besieged workers has led to the accusation by leftist parliamentary parties, swathes of the general public and unionised workers that he is merely a pawn for organised capital, which sees the current moment of economic collapse as a lucrative opportunity to shift the balance of power further in its favour.

“After two years of austerity that has brought statistical unemployment up to 19 percent, it is becoming obvious that the strategic aim of the structural adjustment plan is not fiscal consolidation but the total deregulation of the labour market and a severe devaluation of labour force value,” Savvas Robolis, a widely respected professor of social economics at the Panteion University of Athens and director of research at the Institute of Labour, told IPS.

“The current cuts are just another step towards gathering momentum for the complete abolition of the minimum wage in the country, the secret desire of big capitalists,” he added.

“We have to remember that 2013 will be a year of constitutional reforms; I predict that during this year article 22 (containing legislation that protects the national collective contract) will be attacked severely,” Robolis asserted.

Discussions on decimating the last line of defence for working people in Greece began in 2010 when the minister of labour, Louka Katseli, together with the troika, introduced legal changes regarding wage negotiations within private companies.

According to the Labour Inspectorate in Greece, 52 companies seized on those legal reforms to reduce wage expenses from 42-10 percent, affecting the income of 17,531 workers.

Katseli claimed she partook of the negotiations to avoid an even worse situation, which would have shredded the national collective contract and stripped workers’ associations of the ability to exercise even a minimum degree of bargaining power.

After being removed from government in June 2011, following a damaging publicity campaign launched against her by major media owned by Greek business interests, Katseli told a foreign journalist – in an interview that IPS attended – that she was marginalised because of her efforts to expose the actions of “international neoliberal ideologists and local business interests that are destroying labour relations and any negotiating power remaining in the hands of organised unions.”

“The deconstruction of a structure that provides space for negotiation between social partners is a dangerous path. It inactivates the unions and leaves no valid collective interlocutor to represent workers. This model is leading society into a world where individuals will single-handedly have to take on super powerful business interests on a minimum income and without protection,” Kopsini stressed.

Giorgos Xatzinikolaou, a worker in a major insurance company, told IPS that fears of rapid unemployment keeps much of the labour force silent.

“You feel you are alone, unions are untrustworthy and weak, and people at work keep their mouths shut,” he said, adding that he recently accepted a 20 percent reduction in his salary via a new ‘contract.’

“If you know what’s going on out there (in the labour market) you shut your mouth and sign,” he added.