CARACAS, Jan 13 2012 (IPS) - Iran’s president, Mahmoud Ahmadinejad, sought to freshen up his international image on a tour of Latin America and demonstrate that his country does have friends in the world, while almost every day events place him at the epicentre of fraught geopolitical tensions. 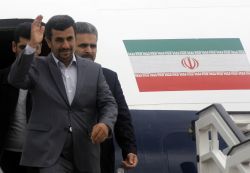 Ahmadinejad has visited Venezuela, Nicaragua, Cuba and Ecuador over the last week. Warmly welcomed by their heads of state, he condemned capitalism, criticised the United States and defended the advantages of economic and trade agreements between Iran and its partners in this far-off region.

“This initiative of President Ahmadinejad’s is apparently intended to improve his international position and his image at home, because his government is increasingly isolated,” Demetrio Boersner, a professor of several generations of students at the School of International Studies of the Central University of Venezuela (UCV), told IPS.

In addition to the increasing pressure and international sanctions against Iran in reprisal for its nuclear programme – which could give the country nuclear weapons, according to Western powers – Ahmadinejad may also be having difficulty holding on to power in Tehran.

“Not only is there criticism of his economic policies and abuse of power, but there are occasionally fierce political battles between Ahmadinejad and Iran’s supreme leader, ayatollah Ali Khamenei, who wants him out of the presidency and replaced by someone more modest and more amenable to management by the council of clerics (the Guardian Council of the Constitution, made up of clerics and lawyers),” said Boersner.

Meanwhile, tension has escalated in the Persian Gulf following Tehran’s warning, in combination with naval exercises, that it might close the strait of Hormuz, a vital passage for tankers carrying 40 percent of global oil exports, to which the United States responded by placing one of its aircraft carriers to guard the strait.

A warning from Iran that the aircraft carrier (temporarily absent) should not return to the Gulf was explicitly dismissed by Washington, while the United States carried out new joint manoeuvres with Israel, Iran’s arch-enemy, and tightened economic sanctions against Iran. The European Union will shortly decide whether to expand its own sanctions.

On Wednesday Jan. 11, Iranian nuclear scientist Mostafa Ahmadi Roshan was killed in Tehran when a magnetic bomb attached to his car exploded. Vice President Mohammad Reza Rahimi called it a “terrorist attack committed by the agents of oppression and the Zionist regime,” a phrase usually taken to mean the U.S. and Israel.

Ahmadinejad did not mention the bombing incident Wednesday afternoon when he received an honorary doctorate in political science from the University of Havana.

But he said “the capitalist system is in decline in different scenarios. It is at a dead end… When they (capitalist powers) lack logic, they resort to using arms to kill and destroy.” Therefore “a new order is necessary, that will respect all human beings, with thinking based on justice.”

In Venezuela, his host President Hugo Chávez joked about those who are concerned about a belligerent alliance between Caracas and Tehran. “Imperialist spokesmen say we are going to set our sights on Washington and launch an attack. It’s laughable, but it’s also a reason to be alert,” the Venezuelan president said.

“We are certainly going to work a lot for bombs and missiles, but in order to fight hunger and poverty. That is our war,” said Chávez.

Continuing in the same vein, Ahmadinejad said “Our weapons are logic, culture, human values and love. We love all people, including the U.S. people, who are suffering the domination of the arrogant.”

In Nicaragua, where he attended the swearing-in of re-elected President Daniel Ortega, Ahmadinejad said he was “very happy to be in the land of the revolution. Our two peoples, on different points of the earth, are striving to establish solidarity and justice.”

In Ecuador, President Rafael Correa welcomed Ahmadinejad with a statement that his country “will maintain relations with countries that wish to strengthen ties of friendship, within a framework of mutual respect.”

“I will not permit outsiders to dictate what we do” in terms of international relations, Correa said.

Last week, Washington warned Latin American countries against deepening their ties with Iran, and the day Ahmadinejad arrived in Caracas, Livia Acosta, the Venezuelan consul in Miami, Florida, was declared persona non grata, without any explanation.

In each of the countries Ahmadinejad visited, economic and trade agreements were discussed. In Venezuela, ongoing agreements in the automotive, petrochemical and construction sectors were reviewed, while the Caracas newspaper El Universal reported that the Iranian delegation requested payment of debts amounting to 298 million dollars.

In Nicaragua, the Iranian president said he would favourably consider the Central American country’s requests for aid, and in Cuba he pledged to expand Tehran’s lines of credit to the island to buttress bilateral trade, which fell from 46 million dollars in 2008 to 27 million dollars in 2009, according to the latest official figures.

Iran’s line of credit for Ecuador, currently 120 million dollars, may also be expanded, and cooperation on building power plants is being studied.

A large question mark over this tour is why Brazil was not included. Ahmadinejad visited the country at the end of former president Luiz Inácio Lula da Silva’s (2003-2011) term of office, when Lula received the Iranian leader and bilateral cooperation agreements in several fields were signed.

“I suspect Brazil let the Iranians know that it did not consider the timing of the proposed visit by Ahmadinejad convenient,” said UCV’s Boersner.

The Council on Hemispheric Affairs, a Washington-based NGO, said in a report that Brasilia had not wanted to irritate the U.S. just when the U.S. government has cancelled taxes on imported ethanol, the biofuel from sugarcane that Brazil supplies to the U.S. market.

Boersner stressed that “Brazil’s maximum aspiration in international politics is to occupy a permanent seat on the United Nations Security Council, and to attain this it needs the support of the five powers (including the U.S.) that currently hold permanent seats and wield a veto on the Security Council, as well as of the rest of the global community.”

“Under these circumstances, Brazil must have been horrified at the idea of receiving a president who has been disowned by most of the international community,” said Boersner.

The absence of Brazil from Ahmadinejad’s itinerary is perhaps a reflection of the distancing from Iran preferred by Brazilian President Dilma Rousseff, who during her first year in office has reduced trade with Tehran by 73 percent and has bluntly condemned the Iranian government’s human rights record.

Rousseff sharply criticised the penalty of death by stoning inflicted on some Iranian women. “As a woman, I cannot accept these mediaeval practices. There is no excuse. I will not make any concessions on this point,” she said.

In any event, Ahmadinejad can point to his South America tour and the political and trade agreements reached as evidence that Iran is not so isolated.

But the countries the Iranian president did visit, because of their size, power and location, are not capable of offering him much help in the event of a military confrontation.