KARACHI, Jan 11 2012 (IPS) - “This could well be my last interview.” There was audible nervousness in Jamal Tarakai’s voice as it crackled over the telephone line from the city of Quetta. The thirty-five-year-old journalist, hailing from the restive Balochistan province in Pakistan, believes he could be killed at any time. 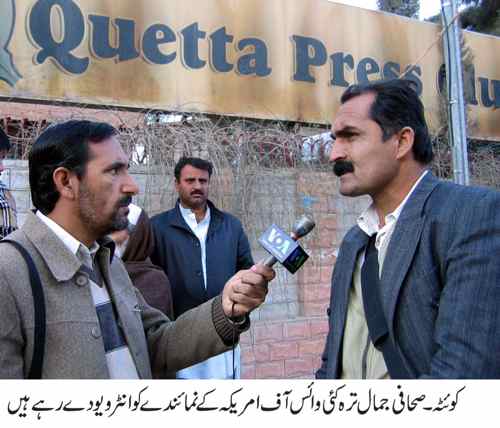 His fear is not unfounded. Over the last two years the press in Balochistan have weathered a bloody wave of violence.

In 2011 alone, ten journalists from the province were killed in their ‘line of duty’. Three lost their lives in explosions or in crossfire between armed groups and security forces, while the other seven were gunned down in blatant assassinations.

“If somebody would guarantee me my life, I would quit this profession in a second,” Tarakai told IPS. He rues the fateful day in May 2011 when he filmed the tragic slaughter of five unarmed foreigners (one of them a seven-month pregnant woman) at the hands of Pakistan’s security forces, near his home in Kharotabad, a public square in Quetta.

Another Quetta-based journalist, Shahzad Baloch, wrote in the English daily Express Tribune on Nov 6, 2011 that his colleagues lost their lives “because of their professional work or perceived sympathies with the province’s suffering citizens.”

The largest and most under-developed of Pakistan’s provinces, Balochistan has, of late, come under the news radar for its ongoing insurgency.

The presence of the Quetta Shura (a militant organisation composed of top leadership of the Afghan Taliban and believed to have been based in the city of Quetta since 2001) has prompted army intervention in the province. Continued kidnappings, numerous discoveries of bullet-riddled and tortured bodies of nationalists, as well as the targeted massacre of an ethnic Muslim minority group, have recently been making national and international headlines.

“With a tribal culture, several separatist and religious groups, intelligence agencies and the security forces, (Balochistan) has become one of the most difficult places for journalists to report from,” Tarakai said.

“Intelligence agencies chase and hound you for talking to western diplomats. They want to know exactly what transpired,” said Shahzada Zulfikar, who works as a stringer for various national and international news organisations.

“In addition, we are caught in the crossfire between various groups,” he added.

Malik Siraj Akbar, a young journalist from Balochistan who recently sought asylum after “receiving threats from the state intelligence agencies” believes journalists in other conflict areas of Pakistan, like the northern Federally Administered Tribal Areas (FATA), are much safer.

In the FATA, Akbar told IPS, there were only Islamists fighting the army in a ‘defined’ conflict.

“In Balochistan, in contrast, there is guerilla warfare. There are at least five Baloch armed groups fighting the security forces. In addition, there are intelligence agencies, paramilitary forces and five anti-nationalists groups and some militant religious groups as well. In all, a journalist faces threats from at least fifteen groups, notwithstanding individuals like the powerful tribal chiefs, parliamentarians, senators, and drug dealers,” he added grimly.

Journalists, therefore, find it almost impossible to keep out of everyone’s hair.

“Sometimes armed nationalist groups claim they have killed over a dozen paramilitary men. This is often vehemently denied by the latter’s spokesmen. If the newspapers don’t publish the report, the nationalist groups call them ‘government agents’ and puppets; on the other hand, if the report gets published, the government and army get annoyed, claiming the reporter and the news organisation are glorifying the insurgency,” Akbar explained to IPS over Skype from Washington D.C.

He told IPS that in the last two years alone, newspapers in Balochistan had stopped publishing editorials and op-ed columns.

“We had excellent op-ed pages and there would be serious debate and good articles. All that is dead now,” he lamented.

Akbar also said that many newspapers used to write openly about missing persons but since the “kill and dump” policy came into effect, along with the rise of anti- nationalist groups, coverage has been throttled.

Not only do newspapers come under fire for printing photos and reports, but certain ‘trigger’ terms and phrases also incite the wrath of various armed actors.

“Terms like ‘martyr’, ‘freedom fighter’ or ‘insurgent’, whether the Baloch stands for ‘independence’ or ‘autonomy’…writing on the insurgency is not easy,” Akbar said.

In another example, he said that Lashkar-e-Jhangvi, a banned religious group, expects copy editors to refer to the Shias (a Muslim religious minority) as ‘infidels’. “And if the word is changed or altered, the newspaper receives threats,” Akbar complained.

He said this situation has endangered the “life of every educated young Baloch.”

Several journalists refused to discuss the issue with IPS over the phone, either because they believed their phones were tapped or simply because talking about the crisis has become too dangerous.

Getting threatening calls and text messages from unknown numbers has become a norm for them.

“(No one) physically stops you from writing anything, they just say you will face the consequences of your activity. That is enough to put the fear of God in you,” said Zulfikar. The unknown enemy, according to these journalists, can be among either state or anti-state elements. “Not a single perpetrator has been brought to justice,” said Riaz Mengal, president of the Balochistan Tribal Union of Journalists. He met the ire of a feudal lord, who is also the son of a former minister, who had him kidnapped back in 2007 after Mengal published a story about the illegal trade of smuggled vehicles.

“If the government and the intelligence agencies want to, they can trace the killers,” said Tarakai.

But according to Akbar, those very government forces that are tasked with delivering justice are themselves responsible for many of the atrocities unfolding across the region.

“It is an open secret that the militant groups who killed journalists have been patronised by the army’s intelligence agencies,” he said.

Mengal, hailing from the Khuzdar district, is one of eight journalists who, until two months ago, was on the hit-list of an underground militant outfit known as the Baloch Musallah Defah Army (BDMA), which had earlier claimed responsibility for the killing of two Khuzdar journalists, Mohammad Khan Sasoli and Munir Shakir.

“After what happened to our colleagues, we never take such threats lightly,” Mengal said. In fact, all eight journalists publicly announced their intention to quit the profession. Though the militant group withdrew its hit-list following appeals from tribal leaders and politicians, Mengal insisted, “We are scared stiff.”

Meanwhile Tarakai’s anxiety has grown significantly since Dr. Baqir Shah, who performed autopsies on the foreigners killed in Kharotabad, was murdered. Shah had contradicted police reports suggesting that the foreigners were suicide bombers and he paid for the truth with his life.

“I am next,” Tarakai said. “I was one of the few witnesses to the episode and appeared before the inquiry committee set up by the court.”

The young journalist’s disquiet is palpable. Even the two armed guards provided by the government to protect him have left him because “they thought (being associated with) me meant their lives were not safe either,” Tarakai said.