CARACAS, Feb 4 2012 (IPS) - Twenty years ago, a military rebellion led by Venezuelan president – then lieutenant-colonel – Hugo Chávez ushered in an enduring era of turmoil for the country’s democracy, with abrupt changes in its institutions and a climate of political upheaval and social and economic instability. 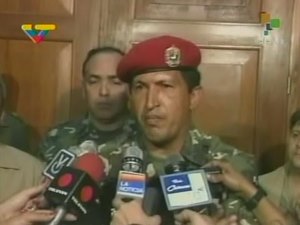 In the early hours of Feb. 4, 1992, Venezuelans, whose most recent dictatorship had fallen in 1958 and who had not seen a barracks uprising since 1962, woke up to the news that soldiers rebelling against then president Carlos Andrés Pérez (1974-1979, 1989-1993) were battling loyal forces at strategic points of the capital city.

The attempted coup left at least 20 people dead, soldiers and civilians, and was a failure in military terms. The ringleaders, five army lieutenant-colonels including Chávez, and dozens of other officers were arrested and tried.

However, the rebels scored a resounding political victory when Chávez appeared on national television, surrounded by his captors. Projecting confidence and strength of purpose, he called on the remaining rebels to lay down their arms, and said their goals had not been achieved “for now”. He also took full responsibility for the failed coup.

“February 4, 1992 split Venezuelan history into two, before and after,” Chávez has claimed ever since that time, and the 20th anniversary of the coup attempt is being duly commemorated this Saturday with a grand military parade on the scale of the Jul. 5 Independence Day parades.

This date is a watershed in recent Venezuelan history, “not as a military defeat, but for its negative consequences, as the rebels benefited from the incompetence of the elites in power, who backed off in fright,” Carlos Raúl Hernández, a professor of political science at Universidad Simón Bolívar, told IPS.

Another bloody attempt to overthrow the government was made on Nov. 27, 1992, led by the navy and air force.

While in prison, the military rebels attracted popular and media support; part of public opinion called for Pérez’s resignation, and amid a climate of political instability the president was deposed in May 1993 by a combination of decisions of the Supreme Court and the National Congress.

Congress designated an interim president who was in a fragile position; in December 1993 president Rafael Caldera (1969-1974, 1994- 1999) was elected in his place. Caldera was by this time distanced from the Christian Democratic Party he had founded half a century earlier, which like other traditional parties was in a state of internal collapse.

Caldera served a five-year term marked by contradictory economic policies, disagreement among politicians on constitutional and legal reforms, the pardon and early release in 1994 of the rebels who took part in the 1992 coup, and the Supreme Court conviction of Pérez for embezzlement of discretionary presidential funds, which he claimed went to support the electoral process in Nicaragua.

“In political terms, the pardon of the rebels and the disgrace of Pérez made it look like the conspirators had been right all along; the political leadership, limited in ability and cowardly, backed off; and so Chávez was able to embark on his rise to power,” said Hernández.

Chávez ran in the 1988 presidential elections, casting himself as the champion of the poor and of the fight against corruption, and spearheading the demand for a constituent assembly (to rewrite the constitution) that would “re-found the republic.” He won with 56 percent of the vote.

Upon taking office in 1999 he held a referendum to convene a constituent assembly. His supporters won 95 percent of the seats and the new constitution reflected their social, political and economic aims. Chávez was re-elected to another six-year term in 2000. Congress was converted into a single-chamber parliament, and five branches of government were instituted: legislative, executive, judicial, electoral and citizen’s (or “moral”) branch.

“Convinced that he must destroy what existed so that a new order could come to birth, Chávez eliminated or changed institutions and legal provisions of the state, thus identifying himself with the Venezuelan tradition of improvisation and temporariness that deprives us of foundations for permanent coexistence,” historian Agustín Blanco Muñoz, author of “Habla el comandante” (The Commander Speaks) a book-length interview in which Chávez expounded his programme in 1997-1998, told IPS.

In 2001, empowered to legislate by decree, Chávez enacted 49 laws, including a land law that provoked opposition from company owners and trade unions. Strikes and demonstrations ensued, culminating in an anti-Chávez coup on Apr. 11, 2002.

The military commanders who deposed Chávez appointed Pedro Carmona, head of the FEDECÁMARAS employers’ association, as interim president. But elite military units refused to recognise Carmona; Chávez supporters poured on to the streets demanding his return; the coup was overturned and Chávez returned to power Apr. 14.

The political crisis persisted, and a management strike at the state oil company and the largest private businesses in December 2002 and January 2003 led to internationally-aided negotiations for holding a recall referendum to revoke the president’s mandate.

During 2003, with huge oil revenues and advice from then Cuban president Fidel Castro, Chávez launched a number of social programmes, called “missions”, to meet the health care, nutrition, education and employment needs of the poorest population.

The recall referendum held in 2004 failed to remove Chávez from office, and the opposition was weakened. The president was re-elected in 2006, took up the cause of socialism, reorganised the parties that supported him into the United Socialist Party of Venezuela (PSUV) and accentuated his antagonism against the United States.

In 2007, a proposal for constitutional reform to allow indefinite re- election of an incumbent president put forward by Chávez was narrowly defeated, and the opposition began to regroup, to the point that it believes it could win the next presidential elections scheduled for October this year.

Chávez can now stand for re-election indefinitely, as the Supreme Court allowed a second referendum on the question in 2009, when the political climate was more favourable for the proposal than in 2007 and it was approved.

The president proposes a new paradigm for Venezuela, “21st century socialism,” but critics say it lacks a programme to give it substance, and its key aspects are communicated in dribs and drabs in Chávez’s weekly television addresses and his explanations of government decisions and actions.

“He is trying to breathe life into a corpse; it’s the detritus of 20th century ‘real socialism’. But he is not alone, he has Cuba and other international allies and the oil resources. No other populist project in Latin America has had the economic base and the sheer scope that Chávez’s has had,” Blanco Muñoz said.

In Hernández’s view, “Chávez’s project is banking on the collapse of democracy, but in Latin America it has been dictatorships and authoritarianism that have collapsed, and his regime too is destined to fail. One example is the unproductive economy, which is deepening our dependence on oil and the income it provides.”

Former socialist leader Teodoro Petkoff, the editor of the opposition newspaper Tal Cual, said there is in Venezuela “an underlying bedrock of democracy, burned on to the hard disk of our society, that has resisted and will continue to resist Chávez’s authoritarian project.”

Chávez and his supporters insist that the groups and forces that governed for 40 years of representative democracy (1958-1998) before he came to power “will never return,” and that after winning the elections next October, the 57-year-old president, who had a cancerous tumour removed in 2011, will stay in office until 2030 or beyond.

In Blanco Muñoz’s view, because of his control over all the branches of power and the electoral process, “in the short or medium term it will be impossible to defeat Chávez” in elections like those due in October, although “contrary to government rhetoric, nothing in history is irreversible.”

Hernández holds the contrasting view that “it looks like it will be more difficult for Chávez to win than for the opposition to score a victory.” The organisations that make up the opposition Coalition for Democratic Unity (MUD) will hold open primaries on Feb. 12 to select their presidential candidate from among five hopefuls.