HAVANA, Feb 7 2012 (IPS) - More than a decade ago, solar electricity changed the lives of several mountain communities in Cuba. Now this and other renewable power sources are emerging as the best options available to develop sustainable energy across the island. 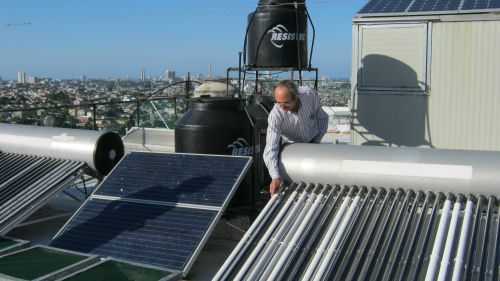 “If the world’s clean energy potential exceeds our consumption needs, why do we insist on using the polluting kind?” asked Luis Bérriz, head of the Cuban Society for the Promotion of Renewable Energy Sources and Respect for the Environment (CUBASOLAR), a non- governmental organisation that promotes the use of alternative and environmentally-friendly power sources.

According to his calculations, the amount of solar radiation Cuba receives is equivalent to 50 million tonnes of oil a day.

“If we covered the 1,000-kilometre-long national highway with solar panels we would generate all the power currently used, without using fossil fuels or occupying a single square metre of agricultural land,” Bérriz said to IPS in an interview.

Moreover, “nobody can block the sun; it belongs to all of us,” he added.

Bérriz is a researcher and long-time advocate of renewable power sources who prefers to talk about “reversing” climate change – which he says is caused by “the destructive actions of today’s societies” – instead of “adapting” to it.

In his opinion, adapting to what others destroy sounds more like “conformism”. Industrialised countries are responsible for 75 percent of all anthropogenic greenhouse gas (GHG) emissions, which cause global warming. The leading GHG is carbon dioxide (CO2).

For Bérriz, the best course of action is to move from oil to clean energy sources, which exceed power needs. The way to do this is to develop the knowledge, technology and industry necessary to tap into the various renewable energy sources most available in each area, he says.

Key components of this process, Bérriz argues, are the training of scientists, technicians and skilled workers to cover human resource needs, and the creation of an energy and environmental culture that will raise the awareness essential for the development of solar power based on “fairness and solidarity”.

Cuba’s greatest achievement in this sense is in the field of scientific development and education, which it shares with other countries of the region through cooperation efforts.

The contribution of wind power, hydroelectric and sugarcane biomass equipment to Cuba’s National Electric Power System in 2010 was 178.1 gigawatt-hours, which is equivalent to four days worth of power generation and replaces almost 46,000 tonnes of oil.

In addition, the island has 57 turbo generators and 67 boilers in 61 sugar mills. The new boost to the sugar industry – managed by a business group since 2011 – includes increasing the potential for power generation based on bagasse and other sugarcane byproducts to supply the sector year round.

Experts see as a good sign the government’s decision to tap into the range of renewable power sources, giving priority to those with the greatest economic impact, as established in an extensive programme aimed at modernising the economy and enhancing its efficiency, launched in April 2011.

“The country is improving in terms of organisation. Work and planning efforts for the next few years are under way in this and other renewable energy-related lines of work,” Bérriz said, insisting that Cuba has all the conditions to move forward in the use of clean energy infrastructure.

Plans include reactivating windmill factories, revitalising the hydroelectric turbine industry, and further developing solar panel production, as much as possible, as these have been the best options in a rural electrification programme implemented over the past 10 years.

“We can’t move at a faster pace (in the industry’s development) due to the country’s huge financial limitations. With more resources we could advance much faster on the path to renewable energy and share it with other nations,” the expert says.

Other experts note that Cuba needs a specific support mechanism to speed up the introduction and use of alternative generators “towards a sustainable energy development” that does not overburden the state, is an attractive and reliable option for foreign investors, and encourages national industries to use these sources.

In this sense, Conrado Moreno, a researcher and member of CUBASOLAR’s board, points to agricultural cooperatives as a “yet untapped niche” where, along with food production and sale, renewable energy sources emerge as “a promising solution in the economic model that is approaching.”

According to Moreno, this form of production will receive incentives through legislation that is currently being discussed and will be passed shortly.

World Bank studies reveal that this region produces only six percent of the world’s GHG emissions from the power industry, and only 13 percent if deforestation and agriculture are factored in. This relatively low proportion is due to a great extent to the widespread use of hydroelectric power.

However, as industry and transportation continue to expand the situation may change in the next 25 years, said Ede Ijjasz-Vásquez, World Bank director of sustainable development for Latin America and the Caribbean.

If the current trends continue, by 2030 CO2 emissions from energy use will have increased by 33 percent per capita in the region, as compared to a global average of 24 percent, he said. With such prospects ahead, power diversification is the best option.