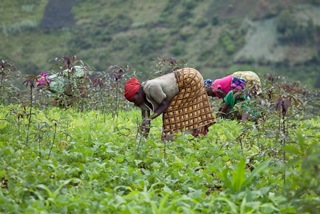 “We have launched a major appeal to the government to modify the law,” Paluku Mivimba, president of FOPAC, the Congo Federation of Smallholder Farmer Organisations, told IPS.

“Several articles of this law create insecurity of tenure for peasant farmers because they eliminate the possibility of peasant farmers becoming owners of land they have been cultivating for many years,” said Mivimba, who is also the head of the federation’s lobbying unit.

Mamie Makuze, is a lawyer and owner of a five hectare plot on the Batéké Plateau, not far from the DRC capital, Kinshasa. “Article 35 of the law weakens small producers and family farmers who don’t have a lot of money. It states that the government will grant agricultural concessions in line with the financial capacity of applicants, who must also be able to carry the cost of developing the land,” she told IPS.

“This is an addition to another article which puts family and subsistence farmers in danger: according to Article 41, which says that if the occupant does not begin developing agricultural land within 18 months of signing a provisional lease, the government has the right to reclaim the land and assign it to someone else.

“The fear is that small producers, who frequently lack resources, run the risk of losing land they’ve acquired – in many cases via inheritance, passed down from generation to generation without official documents.”

Jeanne Botuli, a market gardener in Kisantu, a village in the western province of Bas-Congo is also worried by the new legislation. “For ten years, our group of women have been growing vegetables like amaranth, carrots and onions on small plots of just a few square metres. Even if we don’t have formal title to the land, our presence has long been recognised by the provincial authorities, who no longer have any right to come and take our fields away.”

According to Jean-Baptiste Lubamba, from the National Centre for the Development of Popular Participation, an NGO based in Kinshasa, around 80 percent of Congolese rely on agriculture for their livelihoods.

Roger Pholo, responsible for communications for the Congolese Smallholders’ Confederation, told IPS, “This law offers no security to poor farmers and thus their land could be seized to the benefit of more affluent farmers or for agribusiness enterprises.”

“The majority of these farmers have not been to school and are not well informed about this law,” said Pholo.

“This Act allows the state to seize land from poor farmers,” said Alphonse Nkuli, a member of the Federation of Congolese Business. “It’s a form of “zaïrianisation” which the country has already experienced – and rejected – when land was expropriated from colonial expatriates and handed over to Congolese, including some who did not have the capacity to put it to productive use.”

Nkuli feels carrying out a similar measure now will lead to slump in national agricultural production and increase poverty.

The policy of zaïrianisation was implemented in 1973 under the regime of Mobutu Sese Seko and consisted of the nationalisation of certain property belonging to white settlers, including parcels of land which, Nkuli said, were redistributed to people close to the regime with little experience in agriculture.

Subsequently, most of this land was sold on to other buyers. In South Kivu, in th east of DRC, there were even cases where other foreigners bought back land that had been nationalised.

Agriculture Minister Norbert Basengezi Kantintima acknowledges that there is widespread anxiety, but insists that there will be no return to zaïrianisation-style land seizures. “The small farmer is well protected by the law by means of rural agriculture councils already established in each province to monitor agriculture development in each province,” he told IPS. “And smallholders are part of these councils.”

“The presence of representatives of producers, producer associations, and peasant unions at the heart of the agriculture councils which are present in each sector and at the most local level, is a participatory measure which will allow farmers to ensure the government doesn’t take actions that are unfavourable to them,” Kantitima said.

But Mivimba says these councils do not function effectively, as they are dependent on government which has failed to adequately fund them.

“What’s needed are committees that will manage land, especially in rural areas where the majority of farmers are not aware of their rights and have not been to school. These committees must strengthen advocacy on behalf of smallholders,” Mivimba said.

“We plan to lobby members of the new parliament (sworn in on Feb. 16) and press for the modification of the law to be put on the agenda of the upcoming legislative session.”