KAZIRANGA, India, Feb 18 2012 (IPS) - While shoot-at-sight orders are now effectively keeping rhinoceros poachers at bay, an aggressive weed is threatening the one-horned ungulate in one of its last retreats – the Kaziranga National Park (KNP) in eastern Assam state. 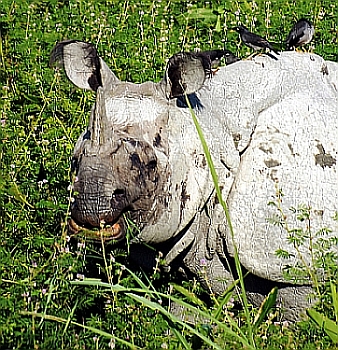 Originally introduced in the tea gardens surrounding the KNP as a nitrogen-fixer, mimosa (Mimosa diplotricha) has spread through the 430 sq km park, edging out the tall grasses on which the rhino and other herbivorous wildlife feed.

“Unless this problem is solved, it’s going to destroy Kaziranga by smothering the grassland. Without the grasses how will these animals survive?” rued Chinmoy Dhar, a deputy ranger.

Mimosa adversely affects grasses and other native plant varieties by drawing on water and other mineral nutrients in the KNP that is rich in biodiversity with its wetlands and mix of tropical evergreen and moist deciduous forests, earning it the status of a UNESCO World Heritage site in 1985.

Thanks to the abundance of prey, KNP also has the highest density of tigers in the world with 32 of the Bengal tigers species per 100 sq km, according to a study carried out in 2010 by Assam’s forest department.

But, KNP’s most famous resident is the one-horned rhino with a third of the estimated 3,000 individuals found here, most of the remainder being in Nepal. A few pairs survive in the Lal Sunehra Park in Pakistan, indicating the once vast stomping grounds of the lumbering animal.

For long, KNP was in the news for the relentless poaching of the rhino for its horn, used in Chinese traditional medicine and believed to have aphrodisiacal qualities.

Better surveillance and tougher laws have, however, reduced the incidence of poaching over the last decade. Where 48 rhinos were killed by horn hunters in 1992, the number of killings reduced to 14 in 2009 and nine by 2010.

Forest rangers, armed with shoot-at-sight orders and given immunity from prosecution since 2010, shot dead nine poachers in that year and another three in 2011.

But, such is the demand for rhino horns from Chinese buyers that even the take-no-prisoner policy is insufficient deterrence. In January, a rhino was killed on the western range of the KNP, though the poachers could not take away the horn.

“Sometimes we face poachers from (insurgency-hit) neighbouring states like Nagaland or Manipur who work in connivance with local men. They carry sophisticated weapons which we lack,” says Surajit Dutta, KNP director.

“Some of our camps are in far corners of the park and manned by only three to four forest guards. We need groups of at least six to seven guards in each camp to face these criminals,” said Dutta.

Forest guard Kanak Chandra Nath says the rhino’s clean habits contribute to its own undoing. Pointing to a huge pile of rhino dung, he said: “Rhinos don’t soil everywhere. They pick certain places and this makes it easy for the poachers to track them.”

Despite continued poaching attempts, KNP is regarded as a success story for conservation in India, though that record is now under threat by the mimosa weed.

Various safe methods to weed out mimosa are being tried out with scientific support from the Rain Forest Research Institute (RFRI) in Jorhat town.

Director of the RFRI, N.K. Vasu tells IPS: “From my long experience (he was director of the KNP previously) I find that manual eradication is the only way to stop the creeper; other methods might damage the diverse animal species in the park.”

Vasu believes that mimosa spread can be contained “if eradication is done twice a year for two to three consecutive years.”

Dutta says that manual eradication is a good solution but carrying it out through the extensive park would involve a considerable amount of money.

KNP is closed to the public during the monsoon season from April to November, mainly because much of its area along the banks of the Brahmaputra river gets flooded and waterlogged.

The tourist season brings another set of problems, a deluge of noisy visitors who take up residence in the numerous guesthouses that have sprung on the edge of the KNP.

“Tourism entails certain responsibilities, but most people don’t follow the rules of the wild. Often they are noisy, they think it’s a zoo,” Dhar said