GUATEMALA: “Only the Mayor Will Benefit from the Mine”

GUATEMALA CITY, Feb 15 2012 (IPS) - “No one will pay for the damages when work at the mine has finished,” says María del Rosario Velásquez, who lives in a town near the Oasis mine 100 km southeast of the Guatemalan capital. 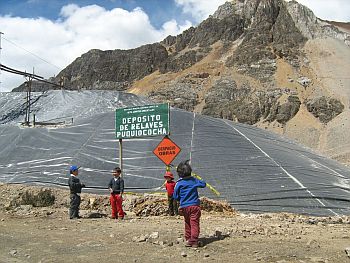 The Canada-based Tahoe Resources company plans to extract gold, silver, zinc and lead from the mine.

Velásquez is not so sure that the mine will bring benefits to her hometown, San Rafael Las Flores. But she is sure of the risks that it poses to the environment.

“We know it will cause a great deal of pollution, which is why we are opposed to this project. The only one here benefiting from this is the mayor,” she told IPS.

Anti-mining sentiments flared up again in Guatemala after the new right-wing president, retired General Otto Pérez Molina, signed a “voluntary agreement” on Jan. 27 with the extractive industries business association, to increase royalties paid by the companies. The deal will be in effect until an amended mining law is passed by Congress.

But the royalties paid by quarries extracting lime, cement, marble and stone – which also cause environmental problems in this impoverished Central American country – will remain unchanged at one percent.

Pérez Molina says the increase in royalties, which according to the government’s estimates will rise from 53 million dollars a year to between 80 and 93 million dollars, is a major achievement.

Environmentalists, universities and local communities opposed the agreement, arguing that the debate on the activities of the mining industry must go beyond the issue of royalties and take into account questions such as natural resources, the environment, the development of local communities, and what real benefits the industry brings to the country.

Velásquez says her community will see no benefits from the rise in royalties to be paid by the mining industry, which on the other hand “will definitely cause us harm.”

Raúl Maas at the Rafael Landívar Jesuit university’s Institute of Agriculture, Natural Resources and the Environment told IPS that mining of precious metals like gold and silver should be suspended in the country “because the conditions are not in place for it to be adequately carried out.

“The activities of this industry should be based on three basic criteria: they should be sustainable, profitable, and socially and environmentally responsible,” he said. “But in the case of Guatemala, only the second one is met.”

The expert said the voluntary agreement on mining royalties is not sustainable “because there is no law to enforce it. At any rate, these discussions must go beyond whether we charge royalties of five, six or seven percent.”

Maas said Guatemala needs to decide what kind of development it wants. “But the environmental impact of mining is an issue that has not been addressed, and the clean-up of damaged areas is not included in the current mining law.

“Our institute is calling for a ‘national environmental pact’ on these issues, because mining activity undermines the access of communities to a strategic resource: water.”

The mining industry is booming in Guatemala, with revenues soaring from nine million dollars a year in 2004 to 522 million dollars in 2010, according to the Ministry of Energy and Mines.

The Guatemalan association of mine, quarry and processing companies, GREMICAP, estimates that the industry will invest 2.37 billion dollars in the period 2010-2016, pay 280 million dollars in taxes and royalties, and generate some 16,000 direct jobs.

But environmentalist Magalí Rey told IPS that “the mining of precious minerals should be suspended until we have a decent law and society has participated in a debate on the implications of and earnings from the industry.

“In order to support continued mining activity in this country, the people should be consulted in a referendum on whether or not they agree with this activity,” she said.

The activist said the voluntary agreement on royalties “makes a mockery of the Guatemalan people” and argued that its only aim is to “whitewash the companies’ image, so mining activities will be accepted.”

Rey clarified that it is necessary to make a distinction between different kinds of mining. “Gold mining is not the same as iron ore extraction,” she said.

“In 80 or 90 percent of conflicts over mining at a global level, gold is involved,” she said.

To boost its economy, Guatemala should pursue alternatives like ecotourism, the activist argued. “We are rich in living cultures and biodiversity, we are a country blessed with wealth in these areas, but we are tearing it apart.”

Natalia Atz with the Ceiba Association, a community development NGO in Guatemala, told IPS that her organisation is concerned that the views of local communities on mining activities in their areas are not being taken into consideration.

“In this country, 58 community referendums have been carried out since 2005 to ask people if they are in favour of mining activities in their areas, and in every single case the response was a rotund ‘no’ – but the government has ignored them,” she said.

“The damages to water sources, and deforestation caused by the mining companies are not compensated by five percent royalties. They should take into account the opinions of the people and promote local development and productive projects,” the activist maintained.

Meanwhile, Mario Marroquín, with the association of extractive industries, GREMIEXT, has said that although no legislative reforms have been carried out to increase royalties, “the entire mining sector is committed to the agreement and to making the voluntary payments, starting this year.”

The new royalties are similar to the rates paid by companies in Peru and Brazil, and the revenue will mainly go towards “improving the quality of life of communities near the mines,” the businessman said.

He also pointed out that the industry pays other taxes, such as income tax.

“The idea is not only to contribute to improving state revenues, but to guarantee the sustainability and competitiveness of the industry,” he said.