Op-Ed: How Gender Values Point the Way for a More Effective U.N.

If war is still a man's game, what is particular to women that they bring of value to the peace table? And what would be the implications for the U.N.'s work if this was clearly articulated and factored into decision-making? 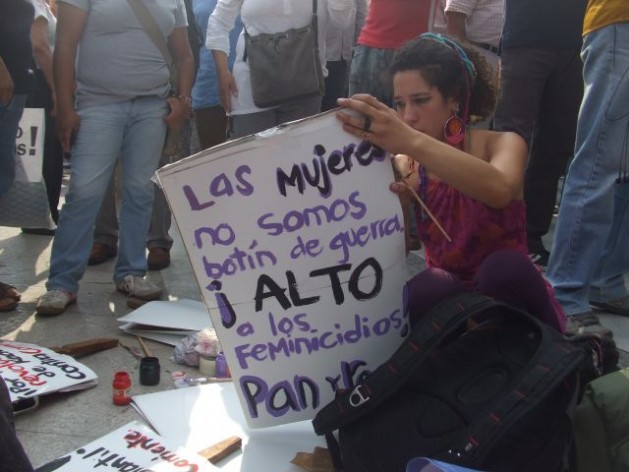 Mexican women say "We are not spoils of war". Credit: Daniela Pastrana/IPS

Feb 20 2012 (IPS) - A growing list of U.N. Security Council Resolutions acknowledges the importance of gender in processes for peace. Resolutions 1325, 1820, 1888, 1889 and 1960 note that women continue to be marginalised in peace negotiations and their potential is not fully utilised in humanitarian planning, peacekeeping operations, peace building, governance and reconstruction.

They call for the participation of women at all levels of decision-making, protection of women and girls from violence, promotion of women’s rights, accountability, law enforcement, and mainstreaming of gender perspectives in peace operations. International humanitarian and human rights law justify these appeals. But what is the true nature of this potential of women?

If war is still a man’s game, what is particular to women that they bring of value to the peace table? And what would be the implications for the U.N.’s work if this was clearly articulated and factored into decision-making?

The answer may lie at least partly in values and values research. In particular, one 2005 study drew relevant conclusions from a cross-cultural assessment in over seventy countries on sex differences in 10 basic values. Men consistently rated power, stimulation, hedonism, achievement, and self-direction values as more important than benevolence and universalism values. The reverse was true for women.

While the differences are small and sex is ascertained to be less of a determinant than age or culture, they point to a critical role for women in myriad processes, including those related to peace.

Conflicts, in contrast, are often a conduit for the assertion of power, even if in defence of perceived justice and human rights. Power essentially relates to social status and prestige, and to control or dominance over people and resources. The use of force for the distribution of power is the underlying game of war, and apparently also the primary preserve of men in that armed conflicts are historically conducted by men.

Given these differences, there appears to be a deeper grounding for the role of women in preventing or overcoming conflict, one that legitimises their stronger position.

Of course, the research findings do not propose that women hold monopolies on benevolence and universalism; they merely place a higher priority on them than men do. But it suggests better-honed cultivation and application of peace-related proficiency among women because they pay greater attention to associated skills. Such competencies include building relationships and nurturing a sense of cooperation, and advancing the value of negotiation, compromise and acceptance over confrontation.

Gender-specific values, therefore, do not only have meaning in and of themselves, but in the development of qualities and behaviours that are of direct relevance to the creation, maintenance, and recovery of peace.

Women’s values and skills thus surely deserve as much space and support on the international peace agenda as traditional male-driven activities. The argument must not only be that women have the human right to be equally represented but rather that what they specifically bring to the negotiating table, to the conference, to the classroom, and to the world, needs to be equally integrated in order to achieve peace objectives.

It is crucial not to fall into the trap of touting one set of values or one gender approach as superior to the other. Nothing will be sustainably gained unless we value the specific features, strengths, and appropriate application of the approach on each side of the gender divide. It may well be that parallel approaches by women and men yield complementary results or even a short-term successful fait accompli on the part of one or the other.

However, participation of all stakeholders in charting and implementing social constructs for peace is the only real option with long term viability. The approach must thus be a joint one, incorporating the respective advantages and talents of both men and women, having them serve as the warp and weft of a new, stronger fabric of methodologies for peace that ultimately transcends gender.

The world does itself a great disservice in not recognising and integrating the specific innate values and competencies of women. The U.N. can be a model for valuing this force for peace and overcoming this oversight. In doing so, it would be arming itself with proven science, in addition to troops, weapons and equipment. Such initiatives must pro-actively ensure the participation of women in every aspect of peace work, from analysis of the root causes of conflict at community level, to the joint design and implementation of strategies, to seats at Security Council meetings, and in its own Secretariat.

At a time when the U.N. must make the best use of its resources, it can dig more deeply and creatively into the assets at its disposal by valuing and incorporating already present sources of gender-based knowledge and skills. Ultimately, gender equity will thus forge stronger, more fully equipped, and more balanced configurations for peace world over.

*Alisa Clarke is president of the Global Vision Institute.