MALDIVES: Paradise on a Knife’s Edge

COLOMBO, Feb 11 2012 (IPS) - The short, one-minute video is grainy but the poor picture quality makes the scene no less chilling. Shot from a balcony, it shows the recently ousted Maldivian President Mohamed Nasheed walking out of a building, pleading with military officers to stop rioting police. 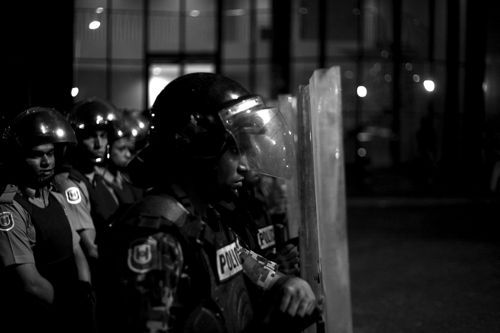 Once a tourists' paradise, Maldives has been rocked by political violence since the ouster of President Mohamed Nasheed on Tuesday, Feb. 7, 2012. Credit: Dying Regime/CC-BY-2.0

A few seconds later, he prophecies that the whole of the Maldives will be destroyed unless the officers, some of whom are standing immobile right in front of him, intervene. In the end, there was no intervention and later that same day, Feb. 7, Nasheed resigned, telling the country through a nationally televised address that he did not wish to use force on his own people.

Nasheed’s resignation was the culmination of weeks of protests by police infuriated by the president’s refusal to release an arrested judge.

The ouster was a sad end to a presidency that had ushered in multi-party democracy to Maldives in 2008, ending Maumoon Abdul Gayoom’s three-decades-long reign.

Since last Tuesday this small South Asian nation, comprised of roughly 1,200 atolls, and particularly its capital Male, has been rocked with violence.

A day after his resignation the former president led a march through Male, which was met by teargas- firing, baton-wielding police. In the days following, courthouses, police stations and other public property in outlying islands have been set on fire.

“It is a very volatile situation, very fluid and very dangerous,” Mohamed Anil, a former legal reforms commissioner under Nasheed’s predecessor and currently head of the Democracy House, a prominent human rights organisation in Male, told IPS. With both police and political activists indulging in violence, Anil claimed Maldives was sitting atop a powder keg with sparks flying all round it.

“For now only (the president’s) Maldivian Democratic Party (MDP) have taken to the streets; but what if other parties opposed to (the situation) also do the same?” he asked.

Other civil rights activists talking to IPS observed that the immediate future of the beautiful islands – known as the world’s favourite honeymoon getaway, which annually play host to three times as many tourists as its total population of 315,000 people – will depend largely on actions pursued by Nasheed and his MDP in the following weeks.

“They can determine what happens, whether they continue to clash on the streets, or agree to seek an end to this mess through peaceful dialogue,” said Ahmed Zahir, head of the Maldives Journalists Association, which has protested Nasheed’s crackdown on democratic institutions in the past.

Since his unceremonious resignation, Nasheed has cut a defiant picture, leading protests through the streets of Male soaked in sweat. He sent his wife and daughter to safety in Sri Lanka two days after the ouster, but has since refused offers of asylum by India and reportedly by Sri Lanka as well.

A slew of diplomats from the United States, Bahrain, the United Nations, India and the Commonwealth arrived in the country Saturday, all pushing for an independent inquiry into the circumstances of Nasheed’s departure from office on Tuesday, which remain shrouded in mystery.

At first he claimed he resigned voluntary, but recanted the story a day later, insisting that he was forced to leave at gunpoint.

He has since called on his successor, Mohammed Waheed Hassan, to resign and call snap elections, threatening mass street protests if his demands were not heeded immediately.

Waheed Hassan has rejected the call, arguing that the situation in the country is not conducive to elections.

U.S. Assistant Secretary of State for South and Central Asia, Robert Blake, backed the new president, claiming that “the police, the election commission and judiciary are not sufficiently prepared for a free and fair election.”

But high-ranking officials from the MDP told IPS that they had not given up hope.

“(Elections) are the bottom line for us,” stressed Eva Abbdulah, an MDP parliamentarian and relative of Nasheed.

In a further effort to broker a peaceful end to the turmoil, M. Ganapathi, a special envoy from India, held discussions with Nasheed and his successors, along with Blake and U.N. Assistant Secretary- General for Political Affairs, Oscar Fernandez-Taranco.

However, if Nasheed expected the weekend visits to shift the power balance onto his side, he would have been disappointed by the outcome of the diplomatic talks.

According to some of Nasheed’s top aides, the former president sought New Delhi’s help to quell the rebellion when the army first refused to take his orders – perhaps buoyed by memories of India’s military intervention in 1998 to douse an attempted coup led by Sri Lankan mercenaries – but was unsuccessful.

Blake echoed similar sentiments to the Indian envoy, stressing, “Police and defence forces need to restore their credibility with the Maldivian people.”

Both New Delhi and Washington have expressed their desire for a credible investigation into how power was transferred from Nasheed to his successor but stopped short of calling the ouster a coup.

The new president has agreed to such an investigation, though Ahmed Nasheed, the former president’s foreign minister, stressed that any such inquiry must be chaired by international personnel.

“It was a police coup, it would be very difficult to hold an impartial (home-grown) inquiry,” he said.

But Anil told IPS that he did not see international pressure bringing the parties at loggerhead to a compromise anytime soon.

“That is the hope, but so far I have not seen any move towards such a dialogue,” he said. The activist warned that the longer Nasheed and other parties failed to engage in talks, the threat of violence remained high. “You need to defuse this situation sooner rather than later.”

Zahir said that though Nasheed was not widely popularly – he only won a quarter of the votes in the first round of the 2008 election before all opposition parties rallied around him in the run-off against Gayoom – he still had significant pockets of support, especially among the youth. “They can (maintain) protests for a long time,” he said.

On the day of the diplomatic visits, however, many parts of the Maldives remained calm. “Our resorts and other tourist facilities (have been) peaceful,” Sim Ibrahim Mohamed, Secretary General of the Maldives Association of Tourism Industry.

However, this relative calm must not be confused with a cooling of tensions. Much will depend on whether Nasheed stays true to his Feb. 10 declaration that Maldives’ ‘medicine’ is out on the streets or instead adopt a much more peaceful approach to the problem.