NOUAKCHOTT , Feb 10 2012 (IPS) - Mariem Mint Ahmedou sits cross-legged on a worn-out carpet in a basic tent built with mud bricks and layers of sewn-together fabric. Her eight-month-old twins, Hussein and Hassan, lie weakly against her body. Both of them have been malnourished since birth, because Beydar, undernourished herself, cannot produce enough breast milk to feed them. 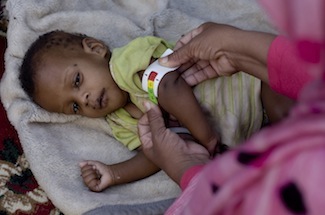 “Because the rains didn’t come, we didn’t have any harvest. We bought some rice on credit, but there is no meat, hardly any milk. Sometimes we don’t eat for two nights,” explains Ahmedou of the dire situation not only her family but most of her village finds itself in.

The mother lives in Douerara, a small village about 800 kilometres east of Mauritania’s capital Nouakchott, in the midst of a parched landscape of sand and rocky soil, deep in the Sahel desert. A drought that destroyed the majority of the harvest in the region has ravaged the country for months, causing rural populations to start running out of food in early February, a good six months before the next rains – if they fall this year.

Apart from Mauritania, other countries in the Sahel, an arid zone between the Sahara desert in North Africa and Sudan’s Savannas in the south, are affected as well: Burkina Faso, Chad, Mali, Niger and the northern regions of Cameroon, Nigeria and Senegal. Twelve million people will soon suffer severe food insecurity and hunger in this region, aid agencies warn.

Mauritania, which has the least amount of potable water in the world, is one of the worst hit nations, with a third of its population already at risk of hunger. “The situation is extremely severe, especially for small children,” says Khadijettou Jarboue, a nutritionist who works at a public health centre in Kiffa, a small town in the country’s South-East.

With every week, more and more families line up at the clinic in search for help. “I am very concerned about the quickly rising numbers of severely malnourished children we see,” says Jarboue, as she weighs and measures a 21-month-old girl, Khadjetm, who has been brought to the centre by her mother, M’Barka Mint Salem, who lives in the village of El-Majba, 45 kilometres outside of Kiffa.

When the nutritionist places a three-coloured plastic band around the child’s upper arm, the strip tightens to the red section. This means the girl is severely malnourished, while yellow means moderate and green that a child weighs enough.

Her mother looks concerned: “I am extremely worried. We have no milk, no food. With every week, we’re struggling more to survive. And we are not the only ones. There are many malnourished children in our village.”

Children, the most vulnerable, are usually the first victims of a hunger crisis. As many as 60 percent of malnourished children can die in a food crisis, but the death rate could be even higher this year because the region has still not recovered from a serious drought in 2010. “The Sahel is a region in permanent crisis, faced with chronic food insecurity,” explains Felicité Tchibindat, regional nutrition advisor in West and Central Africa for United Nations Children’s Fund (UNICEF).

Even in a “normal” year, half of all children under five suffer chronic malnutrition in the Sahel. Rates of acute malnutrition among children are consistently above the ten percent threshold that for UNICEF defines an emergency. This year, the fund expects the situation to be much worse. “Every additional shock will push the lives of hundreds of thousands over the edge,” Tchibindat warns.

This year’s drought has been labelled the “worst since decades” by the U.N. As a result, food prices have tripled in Mauritania and other Sahelian countries, while the price of livestock – the main currency in the region – have dropped rapidly when pastures started to dry out. Roads lined with carcasses of cows that died of thirst and hunger.

“This year will be exceptionally difficult,” agrees Cheik Abdahllahi Ewah, governor of Hodh el Gharbi, one of the most affected provinces in Mauritania. “Last season’s lack of rain was like a death sentence to our people. There is an urgent need for intervention.”

“It’s only February now, and people are already in dire need. I’m very worried about how bad the situation will be in June, the height of the dry season,” he adds.

In a grain storage room in Legaere village in Mauritania’s east, stock manager Jeddou Ould Abdallahi looks helplessly at the few remaining sacks of millet and wheat stacked against the whitewashed walls. There is no way they will feed hundreds of people in surrounding villages until the next harvest in September. “We are on the brink of a famine. People’s health is diminishing quickly,” he says.

Since 2000, harvests have shrunk continuously due to lessening and unpredictable rainfall, says Abdallahi, noting that the persistent lack of water makes it more and more difficult to survive. But this year’s crisis is worse than other droughts the man in his late 40s can remember. It has become a fight for bare survival.

A few kilometres further on, an entire village has walked out to the communal millet field, in a desperate attempt to protect the few crops they managed to grow this season from a flock of birds that is equally desperate to find food to survive. Women and children shout and rattle stones in tin cans, while others wrap pieces of fabric around each millet stalk, so the birds can’t get to the grains.

But the situation is futile. “The birds have already eaten most of the harvest. Yet this field is all we have. All our hard work was for nothing,” laments farmer Zeidan Ould Mohammed. “I worry about my families survival. In the end we can only wait for death.”