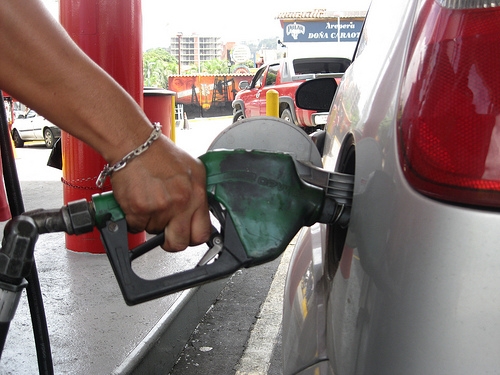 CARACAS, Mar 28 2012 (IPS) - China may be the country that emits the most carbon dioxide (CO2), but oil-rich Venezuela and some of its Caribbean neighbours produce more of this greenhouse gas responsible for global warming on a per capita basis.

The Asian giant emitted just over seven billion tonnes of CO2 in 2008, or 23 percent of the world total, according to the Carbon Dioxide Information Analysis Centre (CDIAC) of the United States Department of Energy. On a per capita basis, this is equivalent to 5.3 tonnes of CO2 per person.

And while Venezuela emits only 0.56 percent of the global total, or 169.5 million tonnes of CO2, this is equivalent to six tonnes per person.

The energy sector is responsible for 95 percent of Venezuela’s CO2 emissions, of which 35 percent is produced from transport, 48 percent arises from the oil industry and thermoelectric plants, and 17 percent from the rest of the country’s industries, Juan Carlos Sánchez, an engineer who is a member of the Intergovernmental Panel on Climate Change (IPCC) which was awarded the Nobel Peace Prize in 2007, told IPS.

“What stands out is the squandering of petrol at the cheapest price in the world – two cents of a dollar per litre – which does not even cover production costs,” Sánchez told IPS. “This wanton consumption defeats any fuel savings or efficiency plan.”

To high consumption of fossil fuels “must be added deforestation of 240,000 hectares a year, which removes CO2-absorbing trees from the environment,” forestry expert Julio César Centeno, a professor of postgraduate courses at the University of the Andes in the southwest of the country, told IPS. “Although half the national territory is covered with forests, 0.6 percent a year is being lost to deforestation.”

The gas flares burning wastefully by the oil rigs are a symbol of the decadence of the century-old extractive industry in Venezuela. In addition, the country has a petrol-guzzling automobile fleet, and an increasing number of thermoelectric plants, as hydroelectricity capacity has been outpaced by demand.

The five million vehicles on the country’s roads consume some 300,000 barrels of petrol a day, “and what is worse, fuel efficiency is 10 km per litre or less, so that 250 grams of CO2 are released into the atmosphere for every kilometre driven, compared for example to 140 grams in Europe, where there are plans to reduce emissions to 95 grams per kilometre by 2020,” said Centeno.

But a few island nations in the Caribbean, and some of Venezuela’s partners in the Organisation of the Petroleum Exporting Countries (OPEC), perform even more poorly.

Trinidad and Tobago emit just 49.7 million tonnes of CO2 a year, but that is equivalent to 37.3 tonnes per person, making the island state the second largest per capita emitter in the world.

And the former Netherlands Antilles (including Curaçao, since 2010 an autonomous country within the Kingdom of the Netherlands) are in fourth place, producing 31.9 tonnes per person, while Aruba, another Dutch Caribbean island, is in ninth place with 21.7 tonnes per person.

An oil refinery in operation since 1918 accounts for much of Curaçao’s emissions. In Trinidad and Tobago, CO2 emissions come mainly from the extraction and liquefaction of natural gas. And on other small islands, emissions are produced by the intensive use of aviation fuel at airports where millions of tourists land and take off.

The experience of other small countries where, for different reasons, fuel use is intensive, is much the same, such as Luxembourg (ranked eighth for per capita emissions), the British overseas territory of Gibraltar, the French islands of Saint-Pierre and Miquelon, and the Danish Faroe Islands.

The leading per capita emitter of CO2 is Qatar, with 53.5 tonnes per person, and among the top 20 are other countries with economies heavily dependent on oil: the United Arab Emirates, Bahrain, Brunei, Kuwait, the United States, Saudi Arabia, Oman and Kazakhstan.

Among these countries, Venezuela stands out for the lack of policies and measures aimed at curbing emissions or compensating for them, “in contrast with its grandiloquent environmental rhetoric at international forums,” said Sánchez, who pointed out that it is the only OPEC country to have ratified the Kyoto Protocol on climate change.

With its hydroelectric power stretched to capacity, Venezuela has begun building thermal plants running on liquid fuels, “when it ought to be using natural gas instead, which can generate the same amount of electricity while emitting 40 percent less CO2,” said Centeno.

Similarly, sources say Venezuela should improve the fuel efficiency of its vehicles, introduce hybrid cars that can run on ethanol, and promote railways and public transport in general over cars: of the five million vehicles circulating daily, 3.2 million are private cars.

As for petrol, there is a broad consensus that the price at the pump, which has been maintained at the same level for nearly 15 years thanks to subsidies, undermines any energy savings plan, quite apart from the loss of over 12 billion dollars a year in state revenues because of the difference with the much higher international price, according to Ecoanalítica, a consulting firm.

Centeno called for measures to halt the degradation of the rivers that supply water to the population, and recommended a programme to replant native trees on at least two million hectares, which could capture 1.1 billion tonnes a year of CO2 from the atmosphere – almost as much as the 2008 CO2 emissions of Brazil, Mexico and Venezuela combined.

Aside from purely environmental concerns, there is a link between economic development and CO2 emissions.

The world releases on average 0.60 tonnes of CO2 for every 1,000 dollars of GDP. However, because of the effect of efficiency gains, in Europe the ratio is only 0.28 tonnes per 1,000 dollars of GDP, while in the United States it is 0.42 tonnes and in Central and South America combined, 0.53 tonnes.

Venezuela and some Caribbean nations that have intensive oil production and consumption have emissions that are above the regional average: Venezuela emits 0.90 tonnes of CO2 per 1,000 dollars of GDP; in Trinidad and Tobago the figure is 2.45 tonnes; and in the former Netherlands Antilles, which in 2008 included Curaçao and its large refinery, it is 2.87 tonnes.