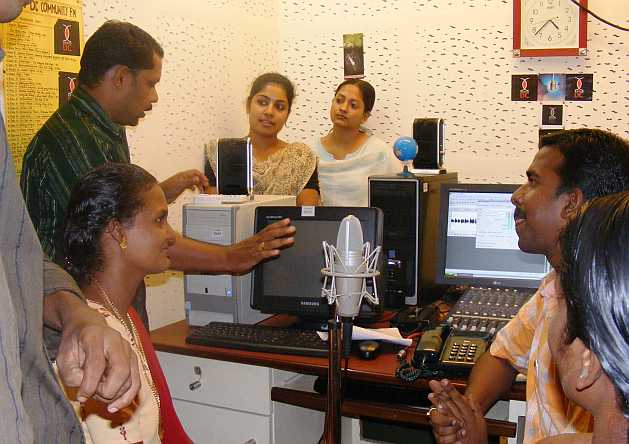 THIRUVANANTHAPURAM, India, Mar 21 2012 (IPS) - Security concerns appear to have stymied the growth of community radio (CR) in India, a vast and diverse country of 1.2 billion people, the bulk of them living in remote, rural areas.

“There are too many ministries and departments involved in the CR licensing process, and remote border states in the northeast adjacent to Burma have been left out, for example,” says Sajan Venniyoor, member of a government committee constituted to fund new stations.

Also left out are the Kashmir valley, racked by a separatist movement, and the largely tribal states of Jharkhand and Chattisgarh in central India that have been hit by Maoist insurgency.

Radio Ujjas, licensed to the non-profit Kutch Women’s Development Organisation, became India’s first CR station close to its international border when it started broadcasting on Mar. 10, 2012. Located in Gujarat’s Bhimsar village, close to the Pakistan border, it applied for a license five years ago.

Prof. Kanchan Malik, at the department of communication, University of Hyderabad, told IPS that the processes to set up CR stations should be simplified if they are to play their mandated role of empowering marginalised communities and helping conflict resolution.

“Cumbersome licensing processes, a ban on news programmes, lack of cost-effective technology, funding restrictions, inadequate capacity building and spectrum allocation delays or denials are some of the hurdles in the way of CR stations coming up,” she said.

The campaign to give space to CR in India – in addition to commercial and public broadcasting – began in earnest after the Supreme Court ruled in February 1995 that airwaves are public property and could not be government monopoly.

But, it was not until 2004 that India’s first CR could be launched, run by the Education and Multimedia Research Centre of Anna University in southern Chennai city.

The Information and Broadcasting (I&B) ministry has so far approved 363 proposals to set up CR stations in the country and, of these, 126 stations are operational.

Of those running, 76 are owned by colleges, institutes and other educational organisations, while only 36 are run by non-governmental organisations, showing limited civil society involvement.

Existing CR policy limits the award of licenses to not-for-profit organisations with a proven track record of community service and registered for not fewer than three years. Stringent restrictions have also been placed on fundraising.

CRs may operate a 100-watt radio station, with coverage limited to a 12-km radius and antenna height to 30 metres. Fifty percent of the programmes are expected to be produced locally and in the local language or dialect.

Five minutes of advertising per hour are allowed, but CR programmes cannot be sponsored except by the government.

According to the ‘Compendium of Community Radio Stations in India’, published in 2011 by the New Delhi-based Commonwealth Education Media Centre for Asia in association with I&B ministry, restrictions on using high power equipment present a major difficulty.

“With the arrival of CR, neglected groups have an opportunity for active participation in mainstream life,” says Chennai-based rights activist Mani Verma. “There has been, visibly, a revival of local culture and an increase in literacy rates.”

“For a thickly populated, predominantly rural country like India, reaching the masses and educating them is essential, and this can be achieved fastest by utilising CR effectively,” says P. Sajikumar, head of ‘Radio DC’ in Thiruvananthapuram.

A survey conducted by the DCSMAT School of Media and Business in this city found that there was a need to create awareness about CR and its capabilities. Often, the survey found, listeners failed to differentiate between CR and commercial radio.

“People tend to compare CR with commercial channels in every aspect,” the survey said. “Participation of listeners at every stage of production can be encouraged and importance given to young talent,” it suggested.

According to Venniyoor, the advent of mobile phones has given a fillip to CR because even the cheapest handsets come embedded with FM capability. “With digitisation, it may get even better. It will certainly get more interesting because of the explosive growth of mobile telephony.”

“Right now, however, we need to concentrate on getting licenses and setting up more stations,” Venniyoor said. “The government has promised support and we will just have to wait and see about actual implementation.”