MÁLAGA, Spain, Mar 29 2012 (IPS) - Spain’s centre-right government stood firm and announced that it would not modify the labour reforms that tens of thousands of people protested Thursday in a 24-hour general strike. 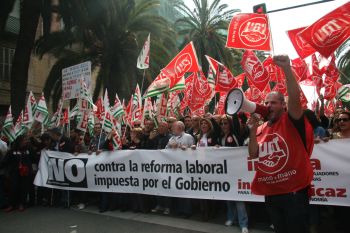 Protesters in Málaga declared "No to the labour reform". Credit: Inés Benítez/IPS

“I’m against the reform. I don’t want my children to inherit worse labour conditions than I have had,” Luís Martínez, a public employee, told IPS during a protest march through the streets of the southern city of Málaga, as demonstrators chanted slogans like “Long live the working class struggle” and “They call it democracy but it isn’t”.

The government of Mariano Rajoy, prime minister since December, passed a decree in February that could still be amended in parliament. The reform makes it easier to dismiss workers and cut wages, on the argument that increasing labour mobility will help bring down unemployment from the record high of 23 percent – the highest rate in the 27-member European Union.

The labour reform plan “is going to cost me a (general) strike,” Rajoy commented in December in an informal conversation with his Finnish counterpart, Jyrki Katainen, caught on camera ahead of the EU summit in Brussels.

More than five million people in this country of 46 million are out of work, and nearly half of these are young people, according to official figures. And the gap between rich and poor is growing, says the latest report by Caritas Spain, which states that 580,000 households have no source of income whatsoever.

The new law limits temporary work contracts to two years, and reduces severance pay from 45 days of pay per year worked to 33 – or 20 if the business has faced losses over three consecutive quarters.

It also reduces the cap for severance pay to two years’ wages, from 3.5 years.

Parliament, where the governing Popular Party (PP) holds a majority, approved the law on Mar. 8. But it will could be subject to amendments in the next few months.

“The core of the reform will not change,” Fátima Báñez, minister of employment and social security, said Thursday.

And economy minister Luís de Guindos said Wednesday that no matter how much of the workforce joined the strike, the government would not modify “a single letter” of the labour reform.

For its part, the socialist party (PSOE), the main opposition force, describes it as not only unjust, but ineffective when Spain is on the threshold of recession, as the Central Bank warned this week.

The unions declared the strike a success on Thursday afternoon.

But the government said that it had a limited impact and that things were “absolutely normal” on Thursday.

Incidents were also reported, with 116 people injured, including 70 police officers posted to maintain public order, according to the interior ministry.

The PSOE “understands the reasons” for the strike and expressed its “solidarity” with workers, Soraya Rodríguez, the party’s spokesperson in parliament, said Thursday ahead of a plenary session.

“The strike will not solve Spain’s problems,” Rajoy said on Tuesday, in a break in the Nuclear Security Summit in Seoul.

On Friday, the government is set to approve an austerity budget for this year that will include major cutbacks aimed at reducing the debt, such as a 15 percent cut for all cabinet ministries.

Government officials say the labour reform is necessary for pulling out of the crisis and generating jobs.

But the head of the UGT in the southern region of Andalusía, Manuel Pastrana, told the press that “the government is lying” when it claims the reform will create jobs.

He also said the measures will mean “the destruction of the labour rights built up over three decades through collective bargaining.”

However, Popular Party lawmaker Carmen Álvarez told the state-run radio station on Wednesday that the reform was “absolutely indispensable for business owners to venture to create jobs.”

The unions denounced pressure from companies that warned employees that there would be consequences for missing work on Thursday, and complained that the number of police deployed was “excessive” and aimed at “intimidating” protesters.

Some employees told IPS that they went to work Thursday to avoid having the day’s wages docked, while others said they had received threats of reprisals from their employers.

United Left legislator Alberto Garzón told IPS that the general strike, the eighth since Spain’s return to democracy after the 1939-1975 dictatorship of General Francisco Franco, was necessary because the reform “attacks the very heart of labour relations.”

Companies defend the reform because, besides cutting the cost of dismissals, it makes work contracts more flexible and includes other provisions such as limiting collective bargaining – measures that employers have been demanding for years.

The law is aimed at reducing wages “by indirect means” such as weakening the collective bargaining capacity of the workforce, which means that what is at stake is “the impoverishment of a society,” said Garzón.

The parliamentarian was a member of Democracia Real YA (Real Democracy Now!), the organisation that gave rise to the 15M movement of “indignados” (indignant or outraged people), which emerged in Spain on May 15, 2011 as the direct forerunner to the global Occupy movement.

“This is not going to be limited to a strike,” Professor Javier Cruche, a member of the 15M, told IPS during Thursday’s demonstration in Málaga, one of the 111 organised around the country, which drew thousands of people on to the streets.

The unions urged the government to negotiate changes in the law before May 1, warning that social protests would grow otherwise.

Just after he became prime minister in December, Rajoy imposed tax hikes, even though he promised during his election campaign not to do so.

He argued that the government of his predecessor, prime minister José Luis Rodríguez Zapatero (2004-2011) of the PSOE, left him a bigger deficit than expected.

The last general strike, on Sept. 29, 2010, was held to protest the labour reform introduced by the socialist government.