GUATEMALA CITY, Mar 13 2012 (IPS) - “In 1982 they killed my mama and 15 other people, and they burned down our house. Now we are trying to get support, because we have not received any aid,” says Jacinto Escobar, an Ixil Indian who is seeking reparations for the damages sustained during Guatemala’s 1960-1996 civil war. 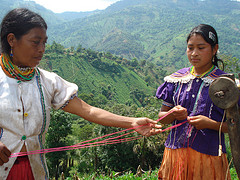 Most of the victims of Guatemala's civil war were indigenous people. Credit: Danilo Valladares/IPS

“We lost our house because during that time they would burn the houses with all the people inside. Thank God I wasn’t there at that time, and I was able to hide,” Escobar, who is now a father of nine, told IPS from the northwestern province of Quiche, which was hit hardest by the armed conflict.

The war between the leftwing guerrillas and government forces left 250,000 people – mainly rural Maya Indians – dead or missing. According to the U.N.-sponsored Historical Clarification Commission, the army was responsible for 93 percent of the killings.

The Dec. 29, 1996 peace agreement between the government and the National Revolutionary Unity of Guatemala (URNG) rebel coalition was the culmination of the peace process in which retired General Otto Pérez Molina – president of Guatemala since January – took part as a representative of the army.

The peace deal established that survivors of the 36-year armed conflict would receive reparations, and included special pacts on human rights and the identity and rights of indigenous people.

A national reparations programme was created by the government in 2003 to pay economic damages, provide material compensation, such as land and housing, and offer psychological support and rehabilitation.

But corruption, nepotism, and the use of the reparations programme for political ends has made its work an uphill task, and the majority of survivors are still waiting for compensation, while only some have received limited reparations, say human rights activists and reports.

“The programme distributed 576 housing units here in 2011, but they were only half-built,” another survivor, Manuel Tay, told IPS from the northwestern province of Chimaltenango. “We had to buy cement and steel, pay a builder, and even haul in construction materials to finish the houses.”

Tay, who lost five of his siblings during the conflict, said the houses are made of such “simple materials that some of the houses weren’t even three months old and the floor was already cracked.”

To receive reparations, Tay had to go through endless red tape in government and non-governmental organisations and set up the Q’anil (“seed” in the Kaqchikel Maya language) Association.

So far, the activist has only received a 36-square-metre house and 3,600 dollars in compensation for himself and his two surviving siblings.

But the survivors of the war would not be so frustrated if it were not for the reports of mismanagement of funds by former officials who have worked in the reparations programme.

A lack of transparency, discretionality and discrimination are some of the difficulties found in the national reparations programme by a social audit carried out in 2010-2011 by 19 NGOs, including associations of survivors of the conflict.

“There are signs of corruption in the implementation of the reparations measures, and violations of the rights of victims, and there is no clear, systematic, appropriate and permanent policy on attention to collective cases,” the report says.

In 2011, 32 indigenous communities brought action against the Guatemalan state before the Inter-American Commission on Human Rights (IACHR) for failing to effectively provide reparations to survivors and family members of victims of the armed conflict.

The problems also involve the psychological and social support and rehabilitation measures for the survivors.

Sergio Castro with the non-governmental Centre for Forensic Analysis and Applied Science (CAFCA), an organisation that provides support to people affected by the war, told IPS that since its creation, the reparations programme has focused on material and economic compensation, which has reached “perhaps 20 percent of all victims.”

“But there has been no restitution of land, investment in production, or psychosocial reparations for the women who suffered violence,” which also form part of the measures outlined by the government programme, he added.

Castro said psychosocial support for victims “is essential for restoring the social fabric and bringing about peaceful coexistence,” especially taking into account that “both victims and victimisers live in the communities.”

Other Latin American countries, such as Chile and Argentina, have also implemented mechanisms to provide economic and social reparations to the victims of past military dictatorships. Another precedent was the German programme of compensation for survivors of the Nazi holocaust.

Feliciana Macario, an activist with the National Coordinating Committee of Guatemalan Widows (CONAVIGUA), told IPS that in the case of Guatemala, “there has been a lack of will” to support victims of the war.

But the fact that Pérez Molina, a signatory of the peace agreement and a former army combatant during the conflict, is now president does not offer hope of support to survivors of the war.

“If the president was a signatory of the peace accord, he should enforce it,” said Macario. “But as yet I can’t say much, until we see how he will deal with the budget for the reparations programme.”

The activist said the aid is extremely important for survivors of the armed conflict, who lost family members, their homes and their crops. She added that psychological and social support is especially important.

“It would do so much to help people get over the violence that was suffered by so many. Thousands of women were raped by the Guatemalan army but have never received any help,” she said.