Guyana Strives to Protect Forests and Coast from Climate Change 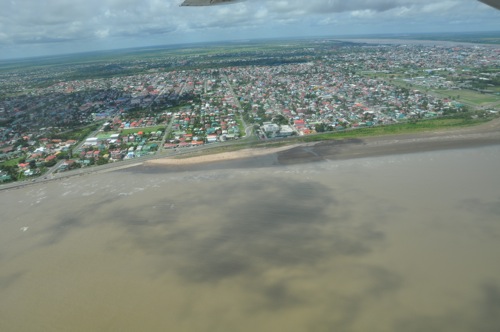 Aerial view of Georgetown, Guyana. About 90 percent of the population and most economic activities are located in a narrow strip along the coast. Credit: Desmond Brown/IPS

GEORGETOWN, Guyana, Apr 18 2012 (IPS) - Its accolades include being labelled the breadbasket of the Caribbean as well as the Amazon adventure. But the natural environment for which the South American country of Guyana is famous is also reeling from the effects of climate change.

Over the past few years, former president Bharrat Jagdo has led several initiatives resulting in the Caribbean Community (CARICOM) country gaining much recognition for its ecosystem management, biodiversity conservation and climate change efforts.

But in spite of these efforts, officials here say Guyana, population 750,000, “is very vulnerable to the impacts of climate change”.

“We continue to be affected by extreme weather patterns and events, in particular, intense rainfall leading to floods, both on the coast and in the hinterland areas,” Prime Minister Samuel Hinds told IPS.

Approximately 90 percent of the population and most economic activities are located in a narrow strip along the coast, near or below sea level, Hinds explained. As a result, the majority of the population is vulnerable to coastal inundation caused by sea-level rise, or floods.

Jagdeo has been championing the cause of developing countries in the fight against climate change. He has also brought to the forefront the role that the country’s forests have been playing, and can continue to play, in addressing climate change.

It was under his leadership that Guyana’s low carbon development strategy, which is commonly known as the LCDS and has received widespread national support and international acclaim, was developed in 2009.

Under the programme, the country receives payment for forests’ ecosystem services. The funds are used to set economic activities on an environmentally friendly, low-carbon trajectory for growth and development.

In November 2010, Guyana and Norway established a partnership – the second biggest interim REDD+ agreement in the world – through which Norway committed to giving Guyana up to 250 million U.S. dollars by 2015 for the deforestation and degradation it avoids.

To date, Guyana has successfully met the performance requirements for two consecutive years, earning approximately 70 million dollars. These funds will be used to support LCDS projects that will transform the national and local economies as well as support Guyana’s efforts to adapt to climate change and to increase its resilience to future climate change.

Although Guyana’s international profile as a developing country at the forefront of the fight against climate change has been boosted immensely, Jadgeo said Caribbean governments are “sleep-walking” on the climate change issue, while the developed world has failed to come up with an agreement that would lead to a path of sustainability.

“Right now we are in a global situation where we have had failures; lots of failures in Copenhagen, in Cancun and at Durban,” Jagdeo told delegates at a Caribbean Sustainable Tourism Conference, a yearly event organised by the Caribbean Tourism Organisation (CTO) that began here on Monday.

Jagdeo called on tourism officials to use their influence to make governments and societies more aware of “the threat to our way of life in the Caribbean”.

A World Bank study determined some time ago that 10 to 15 of the countries most vulnerable to climate conditions are in the Caribbean. A disaster could have a major systemic impact in Caribbean societies, which have seen hurricanes and floods wipe out the equivalent of up to 80 percent of GDP.

Jagdeo urged delegates at the conference to focus strongly on finding solutions to the climate change issue over the next three days. Recognising Caribbean governments’ large fiscal deficits and huge debts, Jagdeo urged them to look for innovative forms of financing.

“Climate financing, funds that are already there for adaptation and mitigation, can be used in the tourism sector,” he said. “We have to be creative about” ensuring that the tourism sector has access to these funds, which it can use for cheaper, renewable green energy.

Richard Skerritt, the CTO chairman and tourism minister for St. Kitts and Nevis, noted that with the urgent economic and fiscal challenges confronting the region, Guyana could have easily succumbed to the temptation to expand the extraction of timber and other resources from its vast rain forests.

But he said the country, recognizing the long-term negative impact of deforestation, has been convinced that it ought not to be forced to choose between short-term development priorities and climate change.

“Even with the scary storm clouds of recession still hovering in our region, and the loud insistent call that we must get our economic houses in order quickly, the Guyana government still chose to protect virtually its entire 40 million acres of rain forest,” Skerritt said.

“This means that approximately 80 percent of the natural land asset of Guyana is being preserved through deliberate and responsible decision-making by its Government.”