NIAMEY, Apr 30 2012 (IPS) - Since January, various groups of Tuareg rebels in Mali have come together in an attempt to administer a new northern state called Azawad. 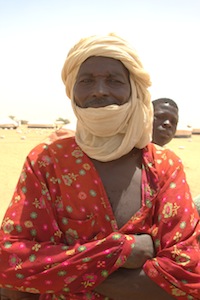 Malian rebels do not have the support of most ethnic groups in the north of the country. Credit: William Lloyd-George/IPS

While this was announced on Apr. 6, the rebel grouping’s control of the region remains questionable, and the roots behind the conflict, complex.

After the colonial French departed in 1960, the region was carved up and the Tuareg nomadic communities were placed into several different countries.

According to Professor Jeremy Keenan, the French felt close to the Tuareg and not the southern ethnicities in Mali, due to their matriarchal society, similar class structures, monogamous nature and a romantic notion that the French had of the Taureg people.

“The French patronised them, it made certain Tuareg clans feel superior,” says Keenan.

When Mali gained independence, Tuareg communities in the north suddenly found themselves under the rule of the southern tribes, whom some Tuareg clans believed to be inferior.

“Their world was turned upside down and they didn’t like it,” explains Keenan. “They felt as though they had done pretty badly out of the colonial shift.”

Unhappy with the new setup, a handful of Tuareg led a small rebellion in 1963. This started when Alladi Ag Alla, a Tuareg rebel, attacked two policemen as they travelled on camel across a remote desert.

The Malian army responded, crushing the rebellion within a year. Soon afterwards, severe drought hit the region from 1969 to 1974 and from 1982 to 1984, and forced thousands of Tuareg to flee to neighbouring countries in search of work and food.

But in 1990, hundreds of Tuaregs returned under the leadership of Iyad Ag Ghali, now the leader of the Islamist faction, Ansar Dine, which is currently calling for Sharia law to be implemented in Mali.

After an initial attack on a small police camp, conflict raged until 1992 when the rebels entered into talks with the Malian government.

The resultant National Pact, which was signed in 1992, fractured the movement. While some Tuareg leaders were keen to negotiate with the government, others took a hard-line approach. Those who disapproved of their comrades’ desire to compromise fled to neighbouring countries. And most of the rebel leaders who remained were given special positions in the state military.

Despite peace agreements, rebels said that the Malian government did not fulfil their promises and anger simmered away. This was until 2006 when a new rebellion broke out after insurgents attacked Malian army installations, only to stop again after ceasefire talks brokered by Algeria.

The result of the talks, the Algiers Accords, promised the Tuareg rebels greater autonomy, economic development, and the protection of Tuareg culture. But the agreement broke down again.

However, one Tuareg rebel leader, Ibrahim Ag Bahanga, refused to negotiate. When the Algiers Accords were being worked out, he was still attacking the Malian army. But in 2009, he was finally pushed out of Mali and found refuge in Libya.

There he teamed up with several former revolutionary commanders who had left Mali after the 1990 rebellion. They included Mohammed Ag Najim, the National Movement for the Liberation of Azawad’s (MNLA) current chief of staff. Once again plans began, to launch another rebellion, one that would be stronger than ever before.

As anti-Muammar Gaddafi protests began in Libya’s capital, Tripoli, Ag Bahanga made plans to travel back to Mali with a handful of leaders to restart their rebellion.

The group returned to Mali in October 2011, and was followed by hundreds of Tuareg mercenaries, who were once hired by both Gaddafi and the Libyan National Transitional Council, and who were armed with stolen Libyan weapons. This was the beginning of the latest conflict.

According to MNLA spokesman Moussa Ag Acharatoumane, few of his people were loyal to Gaddafi, and they never forgot the atrocities committed against the Tuareg people in Mali.

“We would attack a police force and they would respond by attacking any Tuareg they could find,” explains Acharatoumane.

The most notable perpetrators of war crimes were members of Ganda Koy, a Songhai militia funded by the Malian army, which allegedly committed several massacres against unarmed Tuareg civilians.

While some MNLA commanders do have grounds for complaint against the Malian government, and genuine dreams for the creation of a Tuareg state, observers are sceptical of how much public support they have in the region. They are also not convinced that the concept of Tuareg nationalism is embraced by all.

According to West Africa expert Tommy Miles, the MNLA do not have the support of most ethnic groups in the north, who see the rhetoric of the movement as another way for noble Tuaregs to dominate their communities.

Milesargues rather than being a national liberation struggle, “northern Mali now looks like the locus of an armed political struggle between rival local Tuareg leaders, which has cascaded into a general collapse of the social order.”

Miles explains this by pointing to the dominance of the Ifghoas clan members in the rebellions. Few other Tuareg clans are interested in the desire for an independent state.

According to Keenan, in order to understand the true reasons motivating the Islamist groups operating in the north, one has to look at their links with the Algerian regime and the drug trade.

“These are the two elephants in the room,” explains Keenan. “Algeria’s secret service, the Département du Renseignement et de la Sécurité (DRS), has operatives in all these groups in the region.”

Al Qaeda in the Islamic Maghreb and the Movement for Unity and Jihad in West Africa, through proxy drug smugglers, make vast amounts of money out of the drug trade. Like many other groups in the region, they have a major vested interest to be in the north of Mali, where they can control the transportation of cocaine.

“In addition to several other agendas, the DRS wants to keep instability in the region in order to secure the drug trade,” Keenan says, adding that the DRS is also trying to keep the Islamist groups off Algerian soil and in the north of Mali where they can use operatives to control the situation.

Several anti-MNLA groups are emerging and there is a growth in the number of foreign Islamist groups operating in the region. As the conflict becomes increasingly complex and fractured, the MNLA’s history of grievances becomes more distant. As clans, factions and Islamist groups take up guns for their own interests, the region edges closer to all-out civil war.