DOHA, Apr 5 2012 (IPS) - A spokesman for the main Tuareg rebel group, which recently seized the three largest areas in Mali’s north, says it has declared a ceasefire, one day after the United Nations Security Council called for an end to violence in the West African nation. 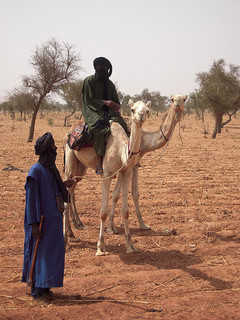 Tuaregs on the road between Mali and Burkina Faso. Credit: Marco Bellucci/CC BY 2.0

The ceasefire comes as Mali’s military rulers have postponed a national meeting on the troubled country’s political future after the Mar. 21 coup.

Moussa Ag Assarid, a Paris-based spokesman for the National Movement for the Liberation of the AZAWAD (MNLA), said on Thursday that the group was ceasing military operations because it had reached its goal.

“Since the day before yesterday when our units reached Douentza, which we consider to be the frontier [of the AZAWAD region], the military offensive is declared over,” Assarid said.

The rebels were able to make gains when a group of disgruntled soldiers started a mutiny and within hours forced the president, Amadou Toumani Toure, to flee, ending two decades of democracy in Mali.

The soldiers say they did so because of Toure’s mishandling of the Tuareg rebels’ uprising in the north.

The U.N. Security Council on Wednesday called for an immediate ceasefire but proposed no firm action to reverse a sequence that has seen a country hailed as a democratic success story descend into chaos in barely two weeks.

While the MNLA is fighting for a Tuareg homeland, Ansar Dine, the Islamist force that the MNLA has operated with, said it wanted to impose Sharia law in northern Mali.

Analysts say the loosely allied groups have an uneasy relationship, prompting speculation of future clashes between the two.

The MNLA statement asked the international community to protect Azawad, but African nations and world bodies have unanimously rejected the idea of Mali’s north seceding.

On Thursday, Alain Juppe, the French foreign minister, called for a political solution to deal with the rebellion in the north.

“There will not be a military solution with the Tuaregs. There needs to be a political solution,” Juppe told journalists, calling on countries in the region to work together. *Published under an agreement with Al Jazeera.