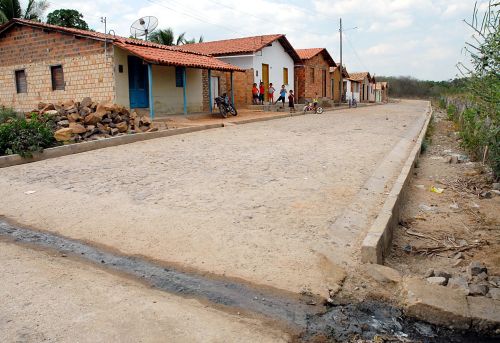 Homes in the rural municipality of Caraúbas do Piauí, in northeastern Brazil. Credit: Valter Campanato/Abr CC BY 3.0

RIO DE JANEIRO, Apr 19 2012 (IPS) - Despite the abundance of natural resources on its more than 25 million hectares of land, including six million hectares ideal for agriculture, the northeast Brazilian state of Piauí has some of the country’s lowest socioeconomic indicators.

A state government initiative, supported by the World Bank, is aimed at remedying this situation, beginning with the regularisation of land titles for 225,000 small and medium-scale farmers and 40 Quilombola communities (isolated rural villages founded by escaped slaves and now home to their descendants).

The Piauí Green Growth and Inclusion Project, announced in March and set to run until March 2013, is being financed through a 350-million-dollar loan from the World Bank, to be paid back in 18 years with a grace period of five years.

It is being implemented in the framework of the federal government’s Land Registry and Agrarian Regularisation Programme, aimed at the legalisation of land titles for family farmers.

The project team leader for the World Bank, Garo Batmanian, told Tierramérica that without a land title, farmers are ineligible for a whole range of benefits and services, from low-interest loans for rural development, to environmental permits for productive activities and participation in national programmes.

The legalisation of land ownership alone will allow farmers to “produce and lift themselves out of poverty,” he said. The project is aimed precisely at providing them with this foundation “so that they can do their work more effectively and grow.”

Assistance is also needed to recover lands impacted by environmental degradation. “If lands have been deforested, they must be reforested. If the vegetation along riverbanks has been cleared – something that is prohibited under the current law – it will have to be replaced,” he added.

Piauí has a population of more than three million people and a total area of 252,378 sq km. It contributes a mere 0.6 percent of Brazil’s gross domestic product (GDP) and 1.1 percent of agricultural GDP, despite having six million hectares of flat, well-drained land ideal for agriculture.

It is also the state with the second highest illiteracy rate in Brazil.

The regularisation of rural land tenure in Piauí is “fundamental” for its development and an issue “that should have been resolved a long time ago,” said Evandro Cardoso, director of the state branch of the National Institute for Colonisation and Agrarian Reform (INCRA), in an article published on the website of the Ministry of Agrarian Development.

Afonso Galvão, a leader of the Small Farmers Movement (MPA) of Piauí, told Tierramérica that there is a large amount of publicly owned land in the state, and that some of it “is being turned over to big companies like Suzano, for the production of pulp” for paper-making.

In the meantime, there are an “enormous” number of small farmers with no land of their own, or with landholdings of 10 hectares or less, he stressed.

According to the World Bank, only 54 percent of farmers in Piauí are landowners. The others are distributed among such nebulous categories as “settled with undefined title”, “occupants” and “landless producers”, who do in fact contribute to production and development, although they currently lack the necessary resources and legal framework.

The situation is similar in the Quilombolas. In the state of Piauí, 193 of these traditional communities have initiated processes to be legally recognised, along with their territories, said Batmanian.

But this process is marked by a certain legal insecurity, because if large-scale farmers want to sell these lands, they cannot do so if they have already been pre-identified as Quilombolas, he added.

The 225,000 farmers and 40 Quilombolas chosen for the project reflect the magnitude of the problem.

They produce a wide range of products including honey, cashew nuts and acerola (a cherry-like fruit), among many others. As such, they could act as suppliers for national government food programmes such as the School Snack Programme. But in order to do so, they would need to be legally recognised as landowners.

The initiative is also aimed at technical capacity building to promote sustainable farming practices, which will in turn generate higher incomes, according to the World Bank.

The World Bank loan is meant to support three main objectives established by the government of the state of Piauí: “green” growth, through improved land tenure security and sustainable agricultural practices; social inclusion, though improved public education and youth participation in the labor market; and “fiscal sustainability”, through more efficient public service delivery.

Small farmer Galvão is wary, however. “First we need to know what kind of development they are talking about, because governments have talked a lot about development, but following a model that does not benefit small farmers, and does benefit the big companies setting up operations here.”

Galvão noted that while statistics reflect growth in the GDP of the state of Piauí, the incomes of small farmers have not increased accordingly.

Although it lags behind other states of Brazil significantly, Piauí’s economy has been growing in recent years. In 2008 it was the state that achieved the greatest growth in GDP, 8.8 percent as compared to a national average of 5.2 percent, according to official figures.

“Another factor is that they have insisted on a model of production for small farmers that has not been successful, by which I mean the insistence on turning farmers into rural entrepreneurs. Under this unjust market logic, small farmers are forced into unfair competition with big agro-industry groups,” said Galvão

Batmanian stressed that the idea is “to promote agriculture with environmental parameters from the beginning, not like in other places, where first an environmental problem is created, and then the resulting conflict must be resolved.”

As far as Galvão is concerned, however, the environmental problems already exist, and many have been caused by large landholders. These problems include the impacts of large monoculture plantations, such as eucalyptus plantations for pulp and paper production; the use of toxic agrochemicals in every stage of cultivation; the large-scale production of genetically modified crops; and the destruction of native vegetation.

“The cerrados (tropical savannahs) of Piauí have been exploited to their limit, with all their vegetation having been destroyed for the cultivation of soybeans,” he said.

The MPA advocates diversified production as the means to achieve sustainability: growing a variety of different vegetable crops and raising livestock adapted to the local climate and pastures; using natural fertilisers and pesticides, produced on the same farm when possible; and developing the utilisation of renewable energy sources.