KINGSTON, Apr 25 2012 (IPS) - For more than a week this past February, the city choked on the acrid smoke that forced schools and business to close. It racked up millions of dollars in lost production and an estimated 60 million dollars in firefighting costs as the city tried to combat yet another fire at Kingston’s Riverton city dump. 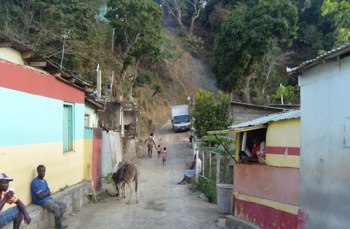 No one knows what toxins were released in the early days of the fire, even though the fumes triggered health scares in communities within a two-mile radius and, according to some, as far as the old capital, Spanish Town.

Highlighting continued inadequacies in emissions control and air quality monitoring, the fire led to renewed calls for stricter air quality regulations, even as authorities have no plans to mitigate increasing greenhouse gas emissions and little knowledge about the substances Jamaicans breathe in each day.

People didn’t learn the levels of emissions until three days later, when the National Environment and Planning Agency (NEPA) and the Ministry of Health (MOH) deployed monitoring devices to measure air quality and emissions.

The report noted, “The data collected gives a reasonable indication of the impact and provides a good baseline to make decisive actions and inform the public on the risk if an event of this magnitude should reoccur.”

NEPA’s coordinator of air quality management, Gary Campbell, confirmed that “analysis indicated the presence of particulate matter at many times the levels to which humans should be exposed”.

According to Jamaica’s second national report to the United Nations Framework Convention on Climate Change (UNFCC), respiratory diseases were among the leading causes of hospitalisation and death in 2005.

Health statistics also show that in 2008, respiratory illnesses were the second most treated complaint in hospitals across the island.

Jamaica’s need to reduce emissions and control air pollution is crucial to its efforts to adapt to climate change and its strategies to reduce greenhouse gases. Climate change is expected to increase levels of respiratory diseases and exacerbate conditions that contribute to them.

The report also listed fires at waste disposal sites, leachate and emissions of methane as leading sources of pollution.

Head of the Office of Disaster Preparedness and Emergency Management Ronald Jackson has recommended permanent closure of the site, noting that Riverton has passed the five-year limit for landfill operations.

“It is advice we have already given. We have also suggested options that include waste-to-energy options; air quality monitoring to know what is happening with the people who live near by and the capping of the dump,” he said.

Aside from Riverton, six other dump sites do not meet international standards as landfills, and trash pickers often cause fires by burning tyres and other material to salvage metals. It is reported as well that extortionists sometimes set fires in a bid to create jobs out of the need to extinguish the blaze.

Jamaica’s inadequate trash collection system means that only 70 to 75 percent of household garbage reaches the dumps. There are no separate industrial dump sites.

With most of rural Jamaica lacking regular garbage collection, estimates of garbage that is burnt, buried or improperly disposed of fall between 191,000 and 228,787 tonnes each year.

Also contributing to emissions are farmers who use fire to clear the land, the production of charcoal and the burning of cane to facilitate reaping.

In Negril, fumes from cane fires and burning peat are the bane of the resort town’s idyllic setting because cane fires coincide with the height of the tourist season, while peat fires smother the town during the summer, the hottest time of the year.

Industrial emissions are also reportedly on the rise. The UNFCC report noted increases in emissions from electricity generation and that emissions should increase with the expected restart of the bauxite and alumina industry.

Carbon dioxide emissions data show a steady increase between 2000 and 2005, from 9,531 gig grams to 13,946 gig grams, when there were between 381,776 and 501,985 motor vehicles on the island. Data also show increases in particulates, nitrous oxide, sulphur dioxide and methane levels.

Williams said that despite obvious increases in the level of pollutants, Jamaica had no initiatives to mitigate greenhouse gases, a view shared by the experts.

Peat fires, in addition to being “an inconvenience”, also affect “the hotel infrastructure (and) people’s health”, Williams added. But recent work to restore the wetlands will “significantly reduce the fires and emissions”, she said, “if not eliminate it”.

But eliminating fires in the Morass, despite its protected status, could prove challenging, as many farmers make their living there, Damian Salmon, chairman of the Negril Chamber Of Commerce said.

“Restoring the wetlands would solve a lot of Negril’s problems including the loss of the beach, because the ecosystems are interconnected, but we can’t drown out the farmers. Many will tell you that they have nowhere else to go,” he noted.

All agree that air quality monitoring is essential. But NEPA’s CEO Peter Knight pointed to critical shortcomings in the collection of solid waste and the urgent need for effective public awareness programmes to drive home the negative effects of open burning.

The agency has already begun to plug the holes in air quality regulations, which has no emissions standards for motor vehicle and open burning.

At its drafting, the Natural Resources Conservation Authority Ambient Air Quality Standards Regulations (2006) aimed to use permits and licenses to control emissions from industrial installations.

“We are revisiting the act and are working with the relevant agencies. There are already draft motor vehicle emissions standards,” Campbell said. He added that the NEPA had not negated its responsibility, but rather had sought to prevent overlapping legislation by including only industrial emissions.

But environmentalists want to see stiffer penalties for open burning. The fine of 2,000 Jamaican dollars and/or three months in prison under the Fires Act are considered too lenient to deter offenders.

Nevertheless, the findings after the Riverton fire have prompted NEPA to recommend additional equipment and monitoring for at least a year. The agency is also seeking funds to increase its monitoring sites across the island.