Wiping the Iron Dust Off Their Feet in Small Brazilian Town

RIO DE JANEIRO, Apr 26 2012 (IPS) - The 380 families living in Piquiá de Baixo, a small town in the northeastern Brazilian state of Maranhão, are fed up with having to endure high levels of pollution from nearby steelworks in their water, air and soil. 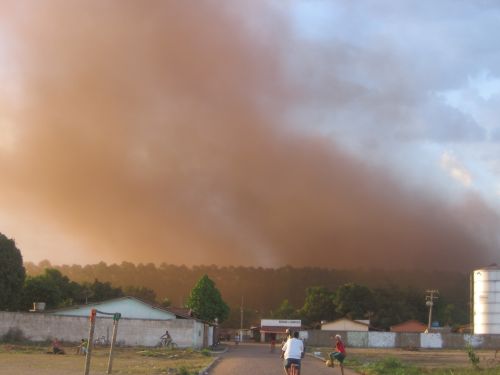 The town takes its name from the piquiá tree, a species highly valued for its wood, which has become extinct in the area where five steel plants have been operating for the past 25 years, headed by Brazilian mining giant Vale.

At present some 500,000 tonnes of pig iron, an intermediate product in the process of steel refining, are produced annually in Piquiá de Baixo. Pig iron is produced in blast furnaces by smelting iron ore, using charcoal or coke as fuel and limestone as a purifying agent.

The steel industry in the municipality of Açailândia, where the town is located, depends on supplies from Vale’s iron ore mines. The pig iron is transported to Atlantic ocean ports near São Luis, the state capital, 500 km away.

Local people in the small town, who live in modest dwellings with yards bordering on the grounds of the large steel plants, are suffering health problems from pollution.

As a result of the extremely poor quality of the air they breathe and the water they drink, more than 40 percent of the residents of Piquiá de Baixo suffer from respiratory illnesses, lung diseases and skin lesions, according to a study by the Reference Centre for Infectious and Parasitic Diseases at the Federal University of Maranhão.

The local population is demanding a transfer to a clean, safe place far away from the steel plants. The majority are farmers, who now can only work land over 200 km from their homes.

Similarly dire situations are occurring in many of Brazil’s mining towns, and a number of them are also organising protests.

Edvard Dantas Cardeal, 68, is the president of the Piquiá de Baixo Residents’ Association, whose members are affected by the smoke, soot and residues generated by the 70 smelting furnaces in the area.

“We are in danger, because we live next to five steel mills. In addition, Vale has a railway station just 300 metres from our homes, where every day hundreds of tonnes of iron ore are transported across our town, 24 hours a day,” he told IPS.

The hazardous living conditions in Piquiá de Baixo are highlighted in the Relatório de Insustentabilidade da Vale 2012 (Report on Vale’s Unsustainability, 2012), launched Apr. 18 in Rio de Janeiro by the International Network of People Affected by Vale, which includes 30 social movements in Argentina, Brazil, Canada, Chile and Mozambique, some of the countries where the mining company operates.

Andressa Caldas, head of Justiça Global (Global Justice), an NGO working for human rights, told IPS that the situation in Açailândia is emblematic, because the community which has been settled there for over 50 years “is asking to be transferred due to the degree of environmental degradation and toxic pollution it is suffering.”

Danilo Chammas, the lawyer for the Piquiá de Baixo residents, concurred. He pointed out that the town already existed when the steel plants arrived 25 years ago. Now, “coexistence has become impossible, as the local people are forced to breathe iron ore dust mixed with charcoal every day,” he said.

“The families should have been relocated when the steelmaking complex was built; but a move is still the only alternative, and is urgently needed,” he told IPS.

Chammas said the residents are demanding “a greater commitment by Vale to the local people; and the company should contribute resources toward the building of a new settlement far away from the pollution.”

According to the Report on Vale’s Unsustainability, the company “refuses to make reparations for the harm caused these people, or to cover the cost of their resettlement.”

Cardeal also said his community’s demand is a matter of utmost urgency, as they cannot stay there any longer, because of the serious risk of further deterioration in public health.

“We cannot stand it any longer; the steel mills pollute the river that flows through the town, and all we can do is ask God to get us out of this place,” he said.

IPS was able to confirm that land a good distance from the steel mills was expropriated in July 2011 by the municipal government of Açailândia to relocate the affected families. The former owner of the land appealed the decision, but the issue was resolved in favour of the expropriation on Mar. 20 by a Maranhao court.

Cardeal and Chammas travelled to Rio de Janeiro in an attempt to meet with representatives of the Vale consortium, which was privatised in 1997.

“We came in the spirit of dialogue, to give Vale the opportunity to clean up its image, tarnished by its link with the pig iron industries, many of which promote slave and child labour,” Chammas said.

Vale’s press office declined to comment to IPS about the matter, although later it issued a communiqué in response to the Report on Vale’s Unsustainability.

“Vale respectfully receives all suggestions and complaints referring to its operations. We are aware that mining activity has an impact, and therefore we work in association with communities and governments to find solutions that guarantee people’s safety, as well as harmonious and healthy coexistence,” the statement says.