WASHINGTON, May 9 2012 (IPS) - With U.S. federal funding sources for renewable energy sources already drying up, coupled with a newfound antipathy towards “green” issues issue here in Washington, some are suggesting that China could offer an important opportunity for the future of renewables in the United States and around the world. 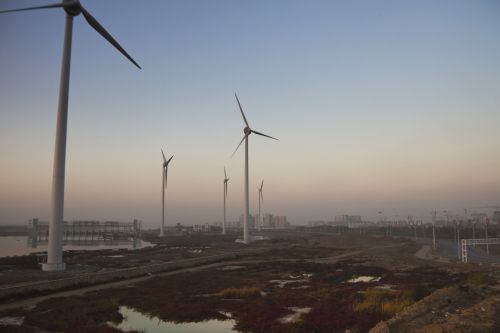 “I would be very bullish for American companies to explore green- technologies-related opportunities in China,” Craig Allen, deputy assistant secretary for Asia within the U.S. Commerce Department’s International Trade Administration, said on Wednesday. “That would be a tremendous area for cooperation.”

While the U.S. and China have been vying for the top spot in spending on green technologies in recent years, China looks set to make massive gains – or at least spend massive amounts of money – in the near future.

The Chinese surpassed the U.S. in wind turbine deployment in 2009. By 2020, the country is supposed to have more solar energy-related infrastructure than the rest of the world combined.

As part of its latest five-year development plan, Beijing has also defined a list of seven strategic emerging industries to receive “special treatment” adding up to some 1.7 billion dollars in government investment. According to Allen, six of those seven areas deal with energy issues.

Allen’s presentation came a day after a high-level British government official made a similar announcement, urging the British private sector to use China as an “incubator” for the development of new green technologies.

“There are big opportunities to partner with Chinese companies and pioneer new technologies in the Chinese market,” John Ashton, the U.K. government’s special representative on climate change, said on his return from an official trip to China. “That will cost you less and get your prices down … faster than it would elsewhere.”

U.S. companies are facing a similar spectrum of concerns. While the United States continues to lead globally in terms of coming up with new innovations in renewable energy, the issue of how to proceed beyond that phase has become increasingly problematic.

According to a study released in late April by the Brookings Institution, state-backed support for the U.S. clean energy sector is set to drop by 75 percent, from 44.3 billion dollars in 2009 to just 11 billion dollars.

While much of this defunding is coming from government programmes that are scheduled to sunset in coming months, in the lead-up to the 2012 U.S. presidential elections green tech has become highly politicised.

In particular, the issue of “wasted” government spending has been strongly linked to funding for renewable energy, making it almost impossible to assume that significant U.S. government support for the sector will be continuing.

While none of this sounds a death knell for renewables in the U.S. in the long term, the uncertainty is making investors highly skittish about dealing with the sector for the time being. In turn, that’s gumming up the pipeline for new and potentially important innovations.

“U.S. companies have inventions that they can’t get off the shelves – they can’t deploy them here, they can’t get financing for demonstration projects,” says Joanna Lewis, an assistant professor of science, technology and international affairs at Georgetown University here in Washington.

“Whereas in China, often they can get these projects built in a short amount of time, get them up and running, and allow investors to get a sense of how viable they are. Then, they can bring that technology back to the U.S. or other markets.”

Lewis, speaking along with Allen and others at a panel discussion at the Woodrow Wilson International Center for Scholars here, highlighted the examples of LP Amina, and engineering company, and several car manufacturers, which she said have successfully used this model.

“I think there’s a lot of merit in the idea of the United States working with China to test out technologies and approaches that for whatever reason have the potential to work better or faster in China but that would benefit the U.S. economy,” Nigel Purvis, a visiting senior associate with the Center for Global Development here, told IPS.

“The key, of course, is ensuring that such programmes do in fact benefit U.S. companies and workers, and working out strong intellectual property arrangements is essential.”

Indeed, there are notable and well-documented obstacles to any attempt by foreign entities to invest in China, over and above the tricky politics. As Purvis notes but in a view held by many, the issue of intellectual property remains one of the most sensitive.

According to Craig Allen, many of the investment regulations in place in China today appear to constitute “a mechanism that the Chinese government uses to facilitate the transfer of technology” to its own state-owned entities.

Such chicanery has turned some entrepreneurs off completely. “I don’t think American companies can work in China,” says Jigar Shah, president of the coalition for Affordable Solar Energy. “I find the whole notion of American companies working in China in a way that is in any way meaningful to be ridiculous.”

Shah notes that there is tremendous and growing opportunity in many countries in Africa, as well as India and Brazil. “All of these places are safe to do business,” Shah says. “There’s just no need to work with China.”

Still, other observers note the possibility of achieving a studied balance.

“I am very bullish on ‘co-opetition’ between the U.S. (or Europe) and China in the clean tech space, but we can’t be naive about it,” Peter Adriaens, a professor of engineering and of entrepreneurial strategy in the Business School at the University of Michigan, told IPS.

“Western companies have to not just look at ‘the huge market’ – a simplistic view – but clearly understand China’s long-term strategy to make considered decisions,” Adriaens continues. “Not doing so has already shown to negatively impact the value of East-West partnerships.”