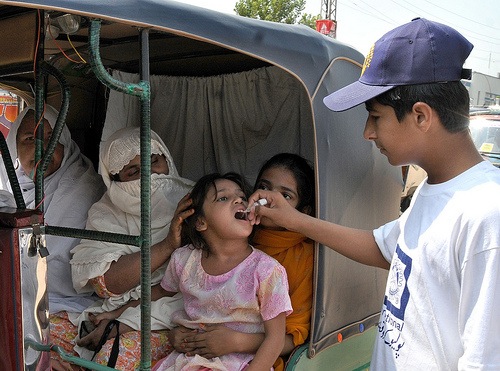 Pakistan and Afghanistan have begun a joint immunisation campaign against polio, while a new project aims to promote child immunisation in Pakistan. Credit: Ashfaq Yusufzai/IPS

UXBRIDGE, Canada, May 3 2012 (IPS) - In northern Pakistan, one in ten children dies before the age of five from diseases such as polio, measles or hepatitis, despite the availability of vaccines. And while health workers feared visiting this region, which includes the mountainous Swat district controlled by the Taliban until 2009, local people also fear the potentially life-saving vaccines.

“Some local imams (religious leaders) have been preaching that vaccines are an attempt by the U.S. government to sterilise children,” said Erfaan Hussein Babak, director of The Awakening project, which aims to promote vaccinations in the Swat district.

“The child mortality rate from preventable diseases is distressingly high,” Babak told IPS by phone from the region.

Some people in the region understand that vaccines are safe, but overall, there is little demand by parents for vaccinations, he said. To counter certain negative perceptions, The Awakening project is working to promote child vaccination by establishing village health committees, school clubs and radio programs.

The project is being funded by the Canada-based Sandra Rotman Centre as one of five projects awarded 10,000 U.S. dollars to educate populations in developing countries about the use of vaccines and immunisation to prevent diseases.

By 2004, polio had nearly been eradicated in Pakistan. However, the disease has seen a resurgence in the northern areas, in part due to the mistaken belief that the oral vaccine could render children impotent or sterile.

“We will talk to people on the basis of passages in the Holy Quran, in which it is clearly stated that He has provided the medicines for every illness,” said Babak. “We are also engaging with the imams to convey accurate information and to connect medicine and health promotion with proper care of children.”

1.7 million children die every year from a vaccine-preventable disease, which amounts to one life every 20 seconds, according to Peter Singer, director of the Sandra Rotman Centre.

Vaccine-preventable diseases remain prevalent in the developing world. They cause or contribute to 20 to 35 percent of all deaths of children under the age of five while stunting the mental and physical development of countless others.

“For the first time in history, we have or will soon have vaccines to control many deadly diseases and improve the quality of life of every child on the planet,” Singer said.

“Paradoxically, the challenge now is to stimulate public demand for vaccinations.”

In order to meet this challenge, health experts and officials from the developing world were invited to submit their ideas in a competition. Five winning projects out of 60 were selected by the Rotman Centre.

From Uganda to El Salvador

The winning project in Uganda invites young people to local cafés to learn about deadly cervical cancer and how the Human Papilloma Virus (HPV) vaccine can prevent it. What is unique about this project, Science Café Uganda, is it brings experts to informal meetings in a country where a large portion of the population is illiterate.

“There are lots of myths about the HPV vaccine among those aware of it; most people don’t know it exists. People don’t have information and that poses serious danger to women’s health,” said Christine Munduru, a public health worker and volunteer leader of the project.

The project With Love We Learn is mobilising Salvadorean civil society to educate and lobby female parliamentarians so the national government will include HPV in its National Plan of Immunisation.

In South Africa, the Future Fighters project will encourage and mentor students at the schools to create their own groups of HIV education ambassadors. HIV victims are still shunned and suffer other social stigma in South Africa.

In Egypt, a group of young doctors and hundreds of volunteers hope to educate parents at hospitals and nurseries about preventing pneumonia in children by using a simple competition involving children’s coloring books as the prize.

Child pneumonia kills, on average, 42,000 children in Egypt every year, according to Mohamed Zaazoue, project director of the Protect Your Children project.

Parents get a quick lesson on the disease and its prevention, pass a simple quiz and win the prize of crayons and coloring books about pneumonia for their children.

“The truth is, everybody wins,” said Zaazoue in a release.