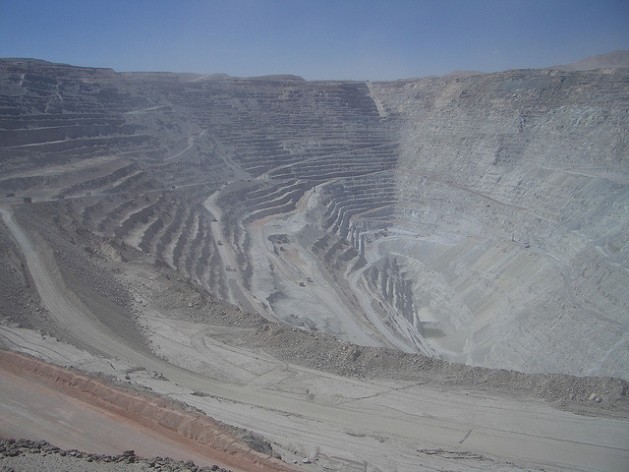 SANTIAGO, May 24 2012 (IPS) - “Temporary and subcontracted workers in the copper industry are the slave labour of the 21st century. Lacking rights and social protection, they are vulnerable and defenceless,” complained Cristián Cuevas, the leader of a union for outsourced Chilean copper workers.

“Most of our country’s subcontracted workers are struggling against the same conditions fought by workers early in the 20th century. A hundred years later, this labour regime has again become a mainstay of the neoliberal economic model,” he told IPS.

Cuevas, the head of the Confederation of Copper Workers (CTC), said over 80,000 workers in the Chilean copper mining sector – two-thirds of the industry’s labour force – are subcontracted by private companies to work alongside permanent employees.

On Thursday May 17, a strike organised by CTC brought mines administered by the state Chilean Copper Corporation (CODELCO) to a standstill. The protest action was also supported by outsourced workers in the private mining sector.

CTC warned that it would call a general strike if the authorities continued to flout agreements reached after protests and strikes in 2007 and 2008 demanding equal pay for equal work, and if they persisted in arbitrary dismissals and wage cuts for subcontracted workers.

Copper is Chile’s main source of income, and CODELCO is the world’s top copper producer, with cutting-edge technology and a highly specialised labour force.

Nationalised in 1971 by the leftwing government of former president Salvador Allende (1970-1973), CODELCO owns close to 20 percent of global reserves of copper, which in recent years has hit record prices of above four dollars a pound on the London Metal Exchange.

CODELCO’s pre-tax profits rose 21.2 percent in 2011, an increase of 1.2 billion dollars. This was the third highest result in the history of the company, which produced over 1.7 million tonnes of fine copper last year.

Chilean state revenues from CODELCO amounted to more than seven billion dollars in 2011, according to company reports.

“Most contracted and subcontracted copper workers earn wages of no more than 300 dollars a month. It is unacceptable for such a profitable industry to keep thousands of workers in precarious and substandard employment conditions,” said Cuevas.

He complained that outsourced workers at CODELCO and in the private mining industry “have no rights and no social protection, are socially vulnerable, and live in uncertainty, unable to make plans for the future because they are on short-term contracts.”

There is an abyss between the treatment of subcontracted workers and that of permanent employees, in areas ranging from wages to job security and occupational health, Cuevas said.

“We are discriminated against with respect to company employees in social and economic spheres, and in terms of institutional policies. There is no question of depriving permanent workers of the rights they have won; we just want to achieve better conditions and benefits for temporary and subcontracted workers,” he said.

“For instance, at Minera Escondida (the world’s largest private copper mine, owned by the Anglo-Australian company BHP Billiton), 200 workers share four showers, and they sleep according to the ‘warm beds’ system (several workers sleeping in turn in the same bunk), a practice that should be consigned to history,” he described.

He said there are enormous wage differences between permanent and outsourced employees of the state company, “due to our neoliberal system, that leads us to have first, second and third class workers.”

CODELCO downplayed the protests and said in a brief online message that the roadblocks were “minor” and the effects were mitigated by effective contingency plans.

“The situation is normal in all of CODELCO’s divisions; there are only minor roadblocks on some access roads,” the company stated.

However, Cuevas said the protests were only a warning, and the next step would be a general strike.

“We have made it very clear that during the general strike we will not allow payrolled workers to enter mine premises, and we call for their solidarity, because while we are demonstrating for rights that have been denied to us, they take our places and make a lot of money working overtime or double shifts, even to the extent of breaking labour laws,” he said.

“We hope CODELCO and the private companies will sit down and talk, and find a way forward in dialogue, otherwise they will have a major industry-wide strike on their hands,” he said, adding that CTC will not announce a date for the protest because it is waiting to “strike a blow.”

Cuevas said this is absolutely the right moment for the workers to fight for their demands because of the climate of social upheaval in the country since 2011, sparked by student protests in which an estimated one million people have taken part.

Subcontracted workers say they are part of this social movement, and that they are struggling “to revive people power.”

“The big battle is for democracy and social justice, and to eliminate inequity. It is outrageous that this country with its huge resources should consign the majority of Chileans to poverty, and have 60 percent of the population living on less than 600 dollars a month,” Cuevas concluded. (END)