Renationalised YPF Aims to Bring Self-Sufficiency in Oil and Gas

BUENOS AIRES, May 4 2012 (IPS) - After the Argentine Congress approved the renationalisation of YPF, the country’s biggest oil company, late Thursday, thousands of demonstrators from different political and social groups cheered the decision outside the legislature. 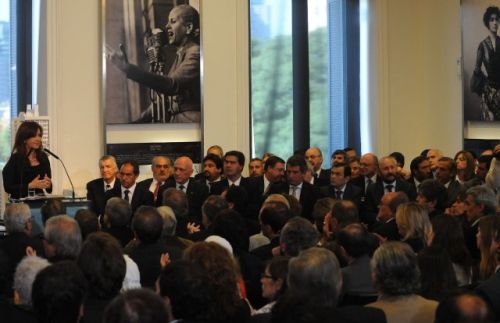 President Cristina Fernández announcing the nationalisation of YPF. Credit: Office of the president of Argentina.

A total of 208 out of 257 deputies in the lower house voted for the expropriation of a 51 percent controlling stake in the company, after the Senate did so a week ago in a 63-3 vote, with four abstentions. The bill, originally introduced by President Cristina Fernández on Apr. 16, now goes to her desk, to be signed into law.

But in contrast with the strong legislative and popular support for the move, opposition leaders and experts point to the uncertainty surrounding the country’s new energy policy, in which YPF will play a central role.

“The parties supported the creation of a new state enterprise. But how will we reach the goals of regaining our self-sufficiency, and attracting investment?” Gerardo Rabinovich, an engineer with the “General Mosconi” Argentine Institute of Energy (IAE), made up of experts who worked in the oil and gas industry during governments of the Radical Civic Union party, told IPS.

The new law declares domestic supplies, production, industrialisation, transport and sales of oil and gas a question of “public interest”, and seizes 89 percent of the YPF shares owned by the Spanish company Repsol.

Of Argentina’s 51 percent, just over half will be held by the federal government, and the rest will be in the hands of the oil and gas-producing provinces.

The remaining 49 percent of YPF will belong to the Petersen group, a private company owned by the Eskenazi family of Buenos Aires, which has 25 percent of the shares, and Repsol, which will be left with six percent, while the rest trades on the New York and Buenos Aires stock exchanges.

Things have now come full circle. YPF (Yacimientos Petrolíferos Fiscales), which was created as a state-run company in 1922, was privatised in two stages by the neoliberal government of Carlos Menem (1989-1999), in 1993, and in 1999, when it was sold to Repsol. Since then the state has held less than one percent of the shares in the company.

Besides presenting the bill on the expropriation of YPF, the centre-left Fernández administration appointed officials to temporarily run the company for 30 days.

Everyone in favour of expropriation

A few hours before the vote in Congress, the president said the seizure of the company’s shares would pose “a big challenge: to create a modern and competitive oil company, aligned with the country’s interests.”

According to local newspaper reports, the search is already on for the right people to run the company.

Miguel Galluccio, an Argentine engineer who worked at YPF before it was privatised and has ample international experience in the oil industry, appears to be the leading candidate to head the firm, and according to the Buenos Aires dailies Ámbito Financiero and La Nación, has already been selected by Fernández.

The law states that between 1998 and 2011, total oil production in Argentina went down 15.9 million cubic metres, 8.6 million of which were the responsibility of YPF, which drastically reduced exploratory drilling.

From an annual average of 110 exploratory wells drilled by the then state-owned company from 1970 to 1992, the number plunged to just 30 in 2010. Since then, the economy has required growing amounts of imported oil and gas to fuel its steady economic growth.

The text of the law also notes that total production of natural gas, a key source of energy for electricity generation in Argentina, fell 6.6 million cubic metres between 2004 and 2011, 6.4 million of which corresponded to YPF.

That means the company was responsible for 54 percent of the drop in oil extraction and 97 percent in the decline in natural gas production, the law says.

Against that backdrop, legislators of the Frente para la Victoria – the governing left-wing faction of the Peronist party – allied lawmakers, and most of the opposition voted to pass the law without modifications.

For example, filmmaker Fernando “Pino” Solanas, a lower-house member of the small local opposition party Proyecto Sur, backed the president’s bill after describing his opposition to the privatisation of YPF in the 1990s, which cost him an attempt on his life that left him with a permanent disability in his legs.

But there are still doubts regarding the future of YPF, such as the ones raised by the IAE in a document favourable to the recovery of state control over the company, but critical of the government’s bill.

In the paper, the IAE argues that the proposed expropriation does not ensure that oil and gas production will increase to past levels, and does not guarantee the attraction of “the investment that is indispensable for achieving the self-sufficiency that (the law) proclaims as its objective.”

Rabinovich said that in order to move towards a long-term sustainable energy policy, what was needed, in the first place, was “a new law on hydrocarbons that provides the investor with a legal framework that makes it possible” to operate in the oil and gas industry.

The law currently in force dates back to 1967, when the entire energy sector belonged to the federal government. Today, the oil and gas reserves belong to the provinces, thanks to a 1994 constitutional reform, and the companies that exploit and commercialise them have changed hands.

The IAE says it is necessary to create a regulatory agency along the lines of Brazil’s National Petroleum Agency, in order to guarantee transparency and the development of human resources.

“Much more than the expropriation (of shares) from Repsol is needed,” said Rabinovich.

Claudio Lozano, a lower house legislator from the centre-left Frente Amplio Progresista, also told IPS that he had reservations.

His party was divided in the Senate vote, but unanimously backed the bill in the Chamber of Deputies.

Lozano, an economist, said it was necessary to go beyond the nationalisation of YPF. He proposed moving towards 100 percent state control of the company, and recovering the state’s capacity to regulate the entire energy sector.

“We’re only able to oversee 34 percent of the country’s oil and 23 percent of the gas, which was what YPF had, but we have to go after the rest of the sector,” he said.

Lozano said that, besides passing a new law that would create a framework for the oil and gas industry, it is urgently necessary to repeal the 1992 decrees that deregulated the sector and allowed private oil companies operating in the country to rake in most of the industry’s profits.

“The first article in the law, which declares all activity in the oil and gas industry a matter of public interest, cannot translate into operating capacity unless these decrees, which run counter to the new law’s stated aim, are eliminated,” he said.

If the 1992 decrees are not repealed, he said, there is a risk that the new YPF “will become the dumb partner” in the energy sector.