RIO DE JANEIRO, Jun 25 2012 (IPS) - Disasters are the new midwives of history. But in order to play this role, they need to be catastrophic, like the accidents in Chernobyl in 1986 and Fukushima in 2011 that led governments to suspend and even abolish their nuclear energy programs. 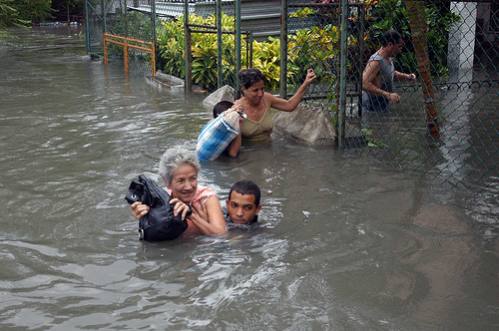 Awareness of environmental deterioration is awakened by major disasters like the one caused in Cuba by Hurricane Wilma in 2005. Credit: Patricia Grogg/IPS

To spur real action on climate change, a disaster would have to be serious enough to change people’s minds, but not so great as to be uncontrollable, according to Martin Lees, Rector Emeritus of the United Nations University for Peace,

“Urgent and deep cuts” in greenhouse gas emissions are needed to curb global warming and its impacts, stresses the statement “Action to Face the Urgent Realities of Climate Change”, presented at the United Nations Conference on Sustainable Development (Rio+20) by the Climate Change Task Force (CCTF).

The CCTF was convened in 2009 by former Soviet president Mikhail Gorbachev (1985-1991) and is made up by 20 former world leaders, climate scientists and experts, including Lees.

Emissions are currently rising at a rate above the worst case scenario foreseen by the Intergovernmental Panel on Climate Change (IPCC), which projected an “intolerable” increase in global average temperature of over six degrees by 2100.

However, IPCC scientists are probably “underestimating the pace and intensity of climate change” due to caution and the complexities of peer review, warns the CCTF statement.

Despite these warnings, the issue of climate change was barely addressed at Rio+20, which ended Friday Jun. 22 in Rio de Janeiro 20 years after the Earth Summit hosted by the same city. The outcomes of the 1992 summit included international conventions on climate change, biodiversity and desertification.

Difficulties in reaching agreements and the failure of negotiations at the meetings of the Conference of the Parties to the United Nations Framework Convention on Climate Change in 2009 in Copenhagen and 2010 in Cancún have led government leaders to avoid the issue of the climate and the polarisation around it, Lees told Tierramérica.

The most frequently cited justification for this avoidance is the global economic and financial crisis, which has mainly affected the countries of Europe, but it is “an extremely dangerous error to think that we must deal with the economy first, and the climate later,” says the CCTF, whose only Latin American member is former Chilean president Ricardo Lagos (2000-2006).

While economic-financial crises are cyclical and have been surmounted many times in the past, the climate crisis threatens irreversible and uncontrollable change, argue the authors.

The urgency of deep cuts in greenhouse gas emissions is accentuated by the fact that the goal of limiting the increase in global average temperature to two degrees will not necessarily keep the planet safe.

As the CCTF statement points out, the consequences of an initial rise of only 0.8 degrees since pre-industrial times have already been “alarming”.

Moreover, a global average rise of two degrees implies that some critical regions of the world will experience a rise of four degrees, it adds.

Even more troubling is the risk that certain systems are reaching a “tipping point” at which feedback processes would be triggered, causing sudden massive change.

The melting of Arctic sea ice means that more energy is absorbed by the ocean, since there is less ice to reflect solar radiation. As a result, the sea temperature rises even more, which in turn even further reduces the area of ice, the statement notes.

As forests are destroyed and degraded, they absorb less carbon and instead release carbon dioxide into the atmosphere. The local temperature then rises and they degrade even further.

Increased carbon dioxide emissions have also led to a 30 percent increase in ocean acidity in the last 200 years. This acidification reduces the ocean’s capacity to absorb carbon, and so more carbon is retained in the atmosphere, contributing to greater acidification as well as climate change.

The seriousness of global warming is almost universally recognised, but internationally agreed action is still lacking. This is what has spurred the call to action by the Task Force, which positively assesses a number of isolated initiatives, such as Sweden’s efforts to develop a low-carbon economy, and the promotion of green technologies and innovation in South Korea.

Yet Rio+20 did not “give proper attention to climate change,” rendering all of the other problems and tasks addressed meaningless, lamented Gorbachev.

The bureaucracy of the United Nations (UN) and difficult relations between its agencies also contributed to keeping the issue off the Rio+20 agenda. There has been a breakdown in the multilateral political system, with “national greed” taking precedence over the global good and giving a free hand to the unchecked overexploitation of natural resources, commented Alexander Likhotal, president of Green Cross International.

The Climate Change Task Force recommends seven lines of action, which include preserving “natural capital”, strengthening the capacities of communities for climate change mitigation and adaptation, and mobilising the essential financial resources, both public and private, as well as implementing deep cuts in greenhouse gas emissions.

The climate crisis should be at the centre of all efforts to ensure the sustainable development of the planet, according to Likhotal. It seemed to have achieved this status after the 1992 Earth Summit, with the adoption of the framework convention, and the subsequent signing in 1997 of the Kyoto Protocol, which established concrete targets and obligations, although it was never adopted by the United States.

Since then, international concern over climate change has fluctuated over years. But awareness of its seriousness is on the rise once again, as a result of extreme weather events, Likhotal observed.

Governments need to be pressured by society to adopt the necessary measures and targets, said Samantha Smith, leader of the WWF Global Climate and Energy Initiative, at a press conference at Rio+20. This is what Brazilians did, she noted, to prevent further destruction through a proposed amendment of the Forest Code, which is still being debated.

Tragedies like the landslides and floods that killed almost 1,000 people last year in mountainous cities near Rio de Janeiro served as a strong argument in favor of legislation that prevents deforestation.

But scattered local disasters, or impacts invisible to the average citizen, such as the loss of biodiversity, are apparently still not enough to motivate international policies and agreements.

The Fukushima accident, because of its enormity, succeeded in burying a number of nuclear projects, at least temporarily. Yet nuclear energy had already lost a great deal of support after Chernobyl, and it was in fact the fears around fossil fuels and climate change that were largely responsible for renewed support in more recent years.

“I’m afraid that only a major catastrophe, that would directly and massively affect people’s lives, would force us to make the changes needed,” said British biologist Jonathan Baillie in an interview with TerraViva, the independent newspaper published by IPS at Rio+20.