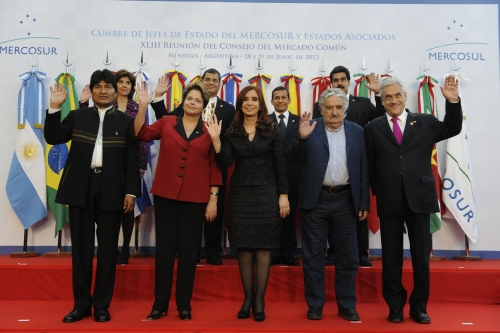 BUENOS AIRES, Jun 30 2012 (IPS) - Argentina, Brazil and Uruguay decided Friday to suspend Paraguay from the Mercosur trade bloc in response to the impeachment of President Fernando Lugo, until elections are held in that country. They also announced that Venezuela would finally join as a full member.

No economic sanctions will be applied to Paraguay, to avoid hurting the Paraguayan people, said Argentine President Cristina Fernández, the host of the 43rd Mercosur (Southern Common Market) summit, which was held in the western Argentine province of Mendoza.

A week after Lugo was given less than 24 hours to prepare his defence and was impeached by the Senate, Paraguay’s partners in South America’s main trade bloc invoked the democratic clause, aimed at punishing countries that breach the democratic order.

According to the summit’s resolution, the suspension will last until the democratic order is fully re-established in Paraguay, which could happen after the new president to be elected in the April 2013 elections takes office in August next year.

The decision was adopted by Fernández and her fellow presidents Dilma Rousseff of Brazil and José Mujica of Uruguay. The latter had expressed his opposition to economic sanctions against Paraguay.

Lugo, a moderate left-wing former Catholic bishop, was replaced by his vice president, Federico Franco – with whom he had a tense relationship – after Franco’s party joined with the opposition to impeach him.

When he learned of the Mercosur decision, Franco said “the tutelage of neighbouring countries has ended; now Paraguay is free to make its own decisions. We will weigh costs and benefits, and we will do what is best for our international interests,” he told journalists.

Fernández called Lugo’s impeachment trial “a parody,” and warned of the risk of “soft coups” in the region, which “under the veneer of certain institutionality,” break with the democratic order.

Although the democracy clause also provides for economic sanctions and the loss of preferential trade terms, Argentina, Brazil and Uruguay decided not to adopt these measures.

Nor will the structural convergence fund, created in 2006 to narrow the gaps in development and economic performance among the bloc’s members, be suspended. Through the fund, Argentina and Brazil, which have populations of 40 and 194 million, respectively, finance development projects in Uruguay and Paraguay, whose populations are 3.3 and 6.4 million.

Paraguay is the main beneficiary of these funds, of which it receives 48 percent, compared to 32 percent for Uruguay and 10 percent each for Argentina and Brazil.

Argentina, Brazil and Uruguay also set a date for Venezuela to formally join the bloc as a full member. Although Venezuela signed a membership agreement in 2006, the Paraguayan Senate had refused to ratify it, effectively blocking the oil-rich country’s incorporation.

The presidents agreed that with Paraguay suspended, Venezuela was free to join, which will happen on Jul. 31, in a summit in Rio de Janeiro.

Brazil, which holds the rotating presidency of Mercosur as of Friday, will “make the greatest possible effort to guarantee that Paraguay’s elections are democratic, free and fair,” President Rousseff said.

Analyst Atilio Borón, a professor of political theory at the University of Buenos Aires, told IPS that the suspension of Paraguay “was the least that could be done; economic sanctions would only have hurt the people of that country.

“I think it’s a good thing that those who seize power don’t participate in a collective body that has a democratic clause,” he added.

“The Paraguayan Senate is an instrument of United States foreign policy in the subregion, and it made keeping Venezuela out of Mercosur its main political aim within the bloc,” he maintained. Full membership for Venezuela “is strong punishment” for the government that ousted Lugo, he added.