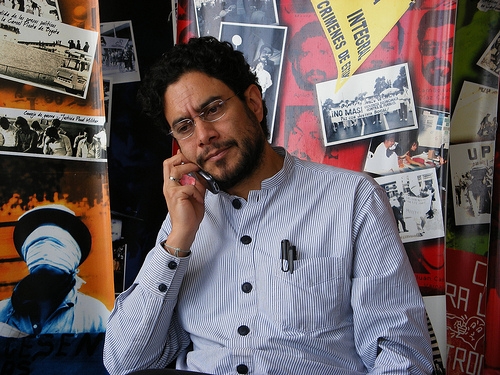 The individual, who was to participate in the plot, then fled to Venezuela, seeking refuge.

Londoño, a 68-year-old right-wing politician, suffered minor injuries when an explosive device attached to his car detonated on May 15, killing his driver and one of his bodyguards and injuring some 20 bystanders.

Córdoba said that after the attack she received a threatening phone call saying, “We’re going to do the same to you.”

The senator claimed that this was all part of a “destabilisation plan”, and filed a report with the Office of the United Nations High Commissioner for Human Rights in Colombia.

A month later, however, on Jun. 15, prosecutor general Eduardo Montealegre reported that the investigation into the attack against Londoño had found “very serious elements that indicate that the perpetrators of the bombing are the FARC,” or Revolutionary Armed Forces of Colombia, a left-wing guerrilla group formed in 1964.

The prosecutor added that the attempt against Londoño “was definitely connected to the car bomb that was found and detonated that same day” and which was meant to go off in front of the main police headquarters in Bogota hours before the explosion that targeted the minister.

The name of the informant has not been disclosed, but his statements were published in the Monday, Jul. 9 edition of La Opinión, a newspaper from the Colombian city of Cúcuta, on the border with Venezuela.

According to his own account, the man crossed the border on May 20, seeking exile in Venezuela, after distancing himself from a small cell formed by three professional assassins, including one woman.

He claimed the cell operates with high-tech weapons, planting micro-devices near intended targets to remotely fire rockets at the chosen time.

The now exiled cell member served in the same military unit as retired army sergeant Hernando Medina, who had now allegedly offered him money to kill Córdoba and Petro, but had long abandoned military life and had not been in contact with Medina for years.

The group of assassins were to be paid one billion Colombian pesos for these murders (some 560,000 dollars). Medina would pocket half of that payment and the other two would receive almost 112,000 dollars each. The remaining 56,000 dollars or so would be used for “logistical expenses”, according to the informant’s account published by La Opinión.

The would-be assassin said he backed out when he overheard a telephone call on speaker phone where someone said there could be no “loose ends”, and was afraid he would be killed after completing the job.

Upon leaving Colombia, the informer refused to be identified in the press or record a video with his testimony, arguing that he feared for his life.

Prosecutor Montealegre told IPS that “there was a statement in the (Londoño) case” and that “an investigation is being conducted by the Technical Investigation Team” (judicial police) of the prosecutor’s office.

IPS was not able to corroborate whether the informant had also given the prosecutor’s office the names of at least two retired generals who are allegedly behind the exposed plan, and which he had disclosed to other sources consulted for this story.

La Opinión identified Harold Bedoya, who served as armed force commander from 1996 to 1997 and is now retired, as one of the generals implicated in the plan, but Bedoya denied the accusation categorically. Bedoya was fingered by the informant as the brains of the destabilisation plot.

According to a reconstruction by IPS, the informant first went with his story to legislator Iván Cepeda, son of communist journalist and senator Manuel Cepeda, who was murdered in 1994.

“He told me he came from Huila (in southwest Colombia) and that as boy he had lived in the same neighbourhood as Hernando Medina, one of my father’s assassins,” Cepeda told IPS.

Medina was head of Red 09, the intelligence unit of the Army’s Ninth Brigade in Huila, and in 1999 he was sentenced to 43 years in prison for the murder of Manuel Cepeda, along with Justo Gil Zúñiga, another sergeant in the same unit.

The two, however, were later inexplicably released on probation – Zúñiga in 2006 and Medina in 2007 – despite the fact that a judicial proceeding had found evidence that they had killed a lieutenant in mid-1999 while they were supposedly being held in a military facility.

According to what the informant told Iván Cepeda, while he suffered one financial crisis after another, Medina progressed in his army career and trained in “new techniques”. The training courses were conducted in Colombia but the instructors were “gringo (U.S.) officers who were stationed in Ecuador, at the Manta” U.S. military base, which was shut down in 2009 by the Ecuadorian government.

The informant claims to have told Medina of his financial troubles in 2010, and that Medina had promised to help him.

That year, Medina supposedly told him that he had “a small job” for him, and asked him to kill Piedad Córdoba. He also added that they “were thinking of doing the same to Petro.”

The informant “said Medina was a compulsive criminal, who can’t go more than two days without killing someone, and who’s been involved in several assassinations and military operations in Colombia,” Cepeda told IPS. “He mentioned my father’s murder and others. I’m not saying who, because that information may be considered confidential information in a criminal proceeding,” he said.

Again according to the informant, “while in jail Medina went on committing crimes” and “working for the army”, Cepeda added.

In a Nov. 3, 1999 letter addressed to then president Andrés Pastrana (1998-2002), Human Rights Watch (HRW) charged that “in spite (of) their purported suspension”, sergeants Medina and Zúñiga “remain in active duty within the armed forces”.

Medina, who at the time had been prosecuted for murder, “continues to direct an intelligence network”, the HRW letter reported.

“Both Medina and Zúñiga apparently move about freely in Bogota. Medina travels frequently to the city of Neiva (capital of Huila) where his relatives live,” HRW added.

Two days after that letter was sent, Iván Cepeda and his wife received death threats.

According to La Opinión, Medina is now “under investigation for his involvement in a conspiracy to commit a crime and traffic drugs” and has been in prison in Bogota since November 2011.

If the informant – who told La Opinión he met with Medina on May 6 in Neiva – is to be believed, Medina is still moving freely in and out of jail and committing crimes.

The plot first came to light on May 9 when Iván Cepeda declared that a retired army officer had informed him that a group of retired military men implicated in human rights abuses had allegedly been formed to conduct intelligence operations.

The alleged plot was to target diverse and even opposing political sectors, including right-wing politicians like Londoño, the liberal former senator and peace activist Córdoba, and mayor Petro, of the central-left.