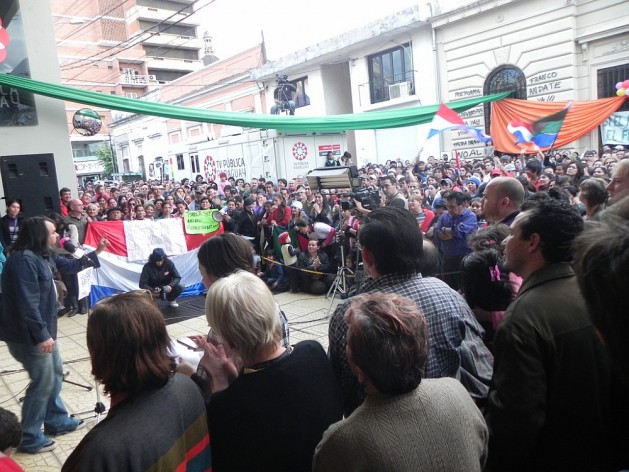 ASUNCIÓN, Jul 5 2012 (IPS) - Paraguay’s isolation, following the impeachment and ouster of President Fernando Lugo 11 days ago,  has grown thanks to slender recognition for the new government and souring diplomatic relations with the neighbours.

On Wednesday, Paraguay moved to downgrade diplomatic relations with Venezuela by withdrawing its ambassador in Caracas, citing “serious evidence of intervention by Venezuelan officials in the internal affairs of Paraguay.”

Venezuela was admitted into Mercosur last week with the leaders of Brazil, Argentina and Uruguay taking advantage of the temporary suspension of Paraguay from the trade bloc, citing irregularities in the impeachment of Lugo and “rupture in the democratic order.”

The Paraguayan parliament has resisted ratification of Venezuela’s  membership since 2006 when the accession protocol was signed by four Mercosur presidents.

Paraguay’s suspension from Mercosur – the Southern Common Market – and Unasur, the 12-member Union of South American Nations, was decided at their consecutive summit meetings in the western Argentine city of Mendoza on Jun. 29.

“The suspension will cease when full restoration of the democratic order in (Paraguay) is verified,” says the Mercosur declaration, signed by presidents Cristina Fernández of Argentina, Dilma Rousseff of Brazil and José Mujica of Uruguay. The bloc stopped short of imposing economic sanctions.

The government of Franco, the Liberal former vice-president in Lugo’s administration, ran into difficulties soon after he was sworn in as president on Jun. 22. Only the Vatican, Canada, Germany, Spain and Taiwan have officially recognised Franco as the head of the new government.

No Latin American country has recognised Franco’s presidency as  as legitimate.

At an extraordinary meeting of the permanent council of the Organisation of American States (OAS) in Washington on, Jun. 26, doubts were raised as to whether due process had been followed at Lugo’s impeachment.

Speculations continue over the decisions taken at the Mercosur and Unasur summits with the fact that economic sanctions were not imposed on Paraguay seen as a relief.

Paraguay will continue to have access to the Mercosur Structural Convergence Fund, of which it is the main beneficiary. Paraguay is assigned 48 percent of these funds, while Uruguay receives 32 percent and the remaining 20 percent goes to Argentina and Brazil.

Carlos Filizzola, former interior minister in the centre-left Lugo administration, told IPS that the ousted government would prefer that the international community does not impose sanctions on Paraguay.

“We are not asking for sanctions, but we do want to denounce to the competent multilateral bodies that there has been a rupture of democracy,” Filizzola said.

To shore up his standing and that of the new government, Franco is seeking to strengthen political and business alliances at home.

By selecting senator Óscar Denis as his vice-president, Franco has put the entire executive branch in the hands of his own political party, the Authentic Radical Liberal Party (PLRA).

In a communiqué, industrialists and business leaders have rejected what they view as an intervention by Mercosur countries in the internal affairs of Paraguay. Lugo’s removal, they stress, did not result in “disturbances of public order or abrogation of the rule of law.”

Economic analyst Ricardo Rodríguez Silvero said business leaders appeared to have underestimated the economic consequences, both direct and indirect, of the country’s suspension from Mercosur that will continue until the general elections due in early 2013.

“Paraguay will have no representation on any of the bloc’s decision-making bodies, and so runs the risk of suffering negative impacts on trade, customs and diplomacy,” he said.

Lawmaker Justo Cárdenas, of the rightwing Colorado Party, told IPS that the actions of Mercosur were intended, in his view, “to marginalise Paraguay in order to incorporate Venezuela” as a full member of the bloc.

Franco has asked Congress to approve a bill introducing personal income tax – something Lugo had requested repeatedly without success – as well as appropriation worth 480 million dollars for social assistance programmes.

Leftwing parties and social movements that swept Lugo into office in 2008 are continuing to demonstrate in different parts of the country, protesting his summary removal from office just nine months before the next general elections.

“We want Lugo to return to his rightful place,” Filizzola told IPS.

Luis Aguayo of the National Coordinating Committee of Peasant Organisations told IPS that his groups “supports not so much Lugo as the democratic process, which cost a great many years of committed struggle and spilled so much Paraguayan blood.”

In contrast, sections supporting Franco accuse the left of deliberately creating disturbances, an argument forwarded to explain the lack of visible public support for the new government.

In Cárdenas’s view, Franco must adhere strictly to the constitution in order to govern. Negotiations are underway for a framework of basic agreements between the two traditional parties, the Colorado Party and the PLRA, a former Lugo ally.

“The Colorado Party has neither sought nor negotiated for positions in the new government, precisely because it is pursuing a return to power via the ballot box,” said Cárdenas whose party ruled Paraguay for six decades, including the 35-year dictatorship of Alfredo Stroessner (1954-1989).

Filizzola said the left was nominating candidates for the general elections, but this was separate from the ongoing struggle to restore democratic order.