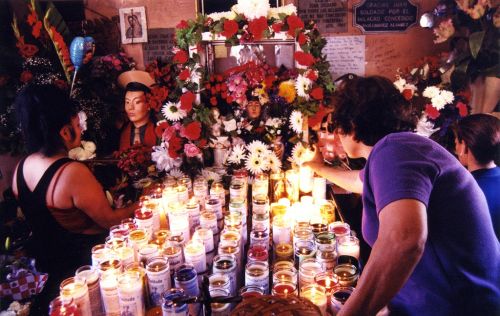 Evangelicals gathered in a church in northern Mexico. Credit: Courtesy of Alfonso Caraveo/Colef

MEXICO CITY, Aug 6 2012 (IPS) - Sergio Guerrero immigrated to the United States without documents in 2006 and returned to Mexico in 2010, converted to another religious faith. “I was Catholic, and there I met a lot of evangelicals, so I was reborn in Christ,” the 31-year-old father of three told IPS.

The story of Guerrero, who worked as a gardener in Charlotte, North Carolina, is one illustration of how migration is contributing to a redrawing of the religious map of Mexico, where nearly 84 million of the country’s 112 million people identify as Catholics and close to 11 million are followers of other Christian faiths or other religions, according to the 2010 census.

“It’s a widespread phenomenon,” pastor Elías Betanzos, with the Centro de Alabanza y Proclamación (CAP), a church in the southern Mexican state of Oaxaca, told IPS. “The reason is that in the United States there are many churches that support immigrants with food and work. Many people who leave seek out other Mexicans, many of whom are already Christians” of other faiths.

“When they come back, they talk to their families, and invite them to church,” said the leader of CAP, who says his church has 6,000 followers and forms part of the Oaxacan Council of Evangelical Unity, which was formed in 2010 and is made up of 1,200 organisations with a total membership of 109,000 people.

Every year, around 500,000 undocumented Mexicans make it into the United States, which is home to some 18 million people of Mexican origin, more than six million of whom are in the country without legal papers, according to the U.S. Census Bureau.

Evangelical groups are growing fast in impoverished southern Mexican states like Chiapas, Oaxaca and Guerrero, which are major sources of immigrants.

For example, 380,000 of the 3.8 million people of Oaxaca belong to the 2,000 evangelical churches in that state, according to the Council of Evangelical Unity.

There are 7,653 institutions listed in the interior ministry’s Federal Registry of Religious Associations, 3,202 of which are Catholic and 4,295 evangelical. The rest are mainstream Protestant faiths, Anglicans, Mormons and others.

“Mexico is one of the countries where a religious transformation has been taking place recently,” said Alberto Hernández, an expert on religion and immigration at the Colegio de la Frontera Norte, a prestigious public Mexican institute of higher education also considered a think tank.

“But it is a latecomer to this process, despite the missionary efforts of evangelical Christian churches,” he told IPS.

“What we see is a multifaceted process driven by different factors, such as urbanisation. It has expanded faster in the southern part of the country. In Chiapas, the religious change is closely linked to the question of migration,” he said.

The Catholic religion has an increasingly weak hold in Mexico. The Church’s statistical yearbook reflects a drop in the number of Catholic baptisms and weddings from 1980 to 2008.

The proportion of Catholic faithful has especially dropped in the country’s northern and southern border areas, in some areas at a slower rate and in others much more rapidly, as found by research carried out by Hernández and other academics.

But the change has not been immune to violent conflicts. Since 2006, there have been more than 200 attacks on evangelicals in states like Michoacán, Hidalgo, Guerrero, Oaxaca and Chiapas, according to evangelical groups.

“In the beginning it was difficult, because my family wasn’t very happy. But later they started to accept it,” said Guerrero, who attends an evangelical church in the town of Jilotzingo outside of Mexico City.

The case of Chiapas, one of the country’s poorest states, where most of the population is indigenous, is the most serious. In that state bordering Guatemala, the first expulsions of people from their communities for religious reasons date back to the 1970s.

A 2008 study on religious rights from a human rights perspective by Professor Erasmo Sáenz at the public Autonomous Metropolitan University reported that 50,000 people had been forcibly displaced from their communities because of religious conflicts, which are far from being resolved.

The case of Chiapas could provide lessons for the rest of the country, with respect to the need to take measures early and prevent the escalation of conflicts, the study says.

In other parts of the country, Betanzos said, “the situation is not similar, but it could reach that level. If the problems are not addressed now, if the government doesn’t intervene, to put the house in order and ensure that the constitutional rights of Christians are respected, there could be a great deal of violence in a few years.”

A religious affairs office was set up to deal with ongoing religious conflicts in Oaxaca, which number at least 13. The office has created dialogue panels in the most problematic areas, where intolerance of evangelical faiths is especially strong.

In the National Survey on Discrimination 2010, carried out by the National Council for the Prevention of Discrimination and the Institute of Legal Research of the National Autonomous University of Mexico, one out of 10 Catholic respondents said people professing evangelical or Protestant faiths should move to other communities.

And three out of 10 respondents who belonged to a religious minority said their biggest problem was rejection and lack of acceptance by their families and communities.

A Federal Law to Prevent and Eliminate Discrimination, including religious intolerance, has been in force since 2003.

“In every state, the conflict hides other factors and interests, which are expressed on the religious front. The conflict has started to appear in other states,” Hernández said.

The expert forms part of a group of 12 researchers involved in a project on “changing faith in the context of immigration”, which began in 2010 and is nearing completion. The study analyses religious changes and migration in the state of Morelos, next to the Mexican capital.