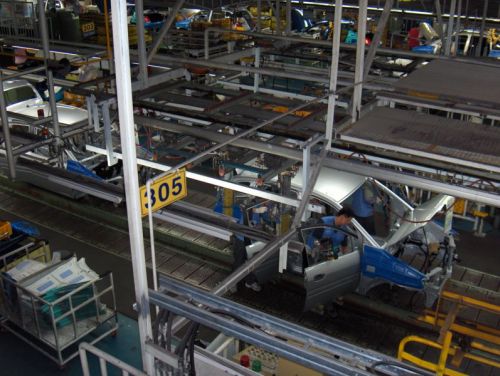 WASHINGTON, Sep 12 2012 (IPS) - Following a plunge in output triggered by the global economic crisis, world auto production is roaring back to new peaks.

According to London-based IHS Automotive, global production of passenger vehicles (cars and light trucks) rose from 74.4 million in 2010 to 76.8 million in 2011 —and 2012 may bring an all-time high of 80 million or more vehicles.

Global sales of passenger vehicles increased from 75.4 million to 78.6 million over the same period, with a projected 81.8 million in 2012.

The major driver of increased production and sales are the so-called emerging economies, especially China.

Rising sales translate into ever-expanding fleets. An estimated 691 million passenger cars were on the world’s roads in 2011. When both light- and heavy-duty trucks are included, the number rises to 979 million vehicles, which was 30 million more than just a year earlier. By the end of 2012, the global fleet could top one billion vehicles—one for every seven people on the planet.

The vast majority of light vehicles produced have conventional types of propulsion systems, either gasoline or diesel-powered combustion engines. Hybrid vehicles are growing in number, but they remain below two percent of total vehicle output.

In 2011, just over 400,000 Toyota Priuses, by far the best-selling hybrid, were purchased. Altogether Toyota has sold four million hybrids since 1997, of which the Prius accounts for 2.9 million.

Electric vehicle (EV) production remains at barely perceptible levels. Although several countries have issued targets for future EV fleets, it remains to be seen whether these goals can be met.

China, for instance, wants to put five million plug-in hybrid-electric and fully electric vehicles on its roads by 2020 – which could account for more than 40 percent of the global EV fleet that year. An analysis by Deutsche Bank Climate Advisors, however, suggests that production of 1.1 million EVs and a fleet of 3.5 million in China is a more realistic projection.

Automobiles are major contributors to air pollution and greenhouse gas emissions. Greater fuel efficiency, along with the use of cleaner fuels, can help mitigate these impacts, although increases in the numbers of cars and the distances driven threaten to overwhelm fuel economy advances.

In August 2012, the Barack Obama administration issued new rules that require U.S. auto manufacturers to increase the average efficiency of new cars and trucks to 54.5 miles per gallon by 2025.

The new rules, aimed at reducing fuel consumption and cutting greenhouse gas emissions from vehicles, will increase pressure on automakers to develop more alternative-fuel vehicles, such as electric and plug-in hybrid cars, as well as improve the mileage of their mass-market models by developing better engines and using lighter materials.

An improvement is urgently needed, especially in view of the fact that U.S. fuel efficiency lags badly behind not only Japan and the European Union, but also China.

Discussions about reducing the environmental impacts of vehicles tend to focus on technical improvements, such as engines, aerodynamic design, and fuels – yet another concern is the distances traveled.

Even though the United States has just 25 percent of the total population of the group of wealthy nations known as the Organisation for Economic Co-operation and Development (OECD), in 2008 it alone accounted for just over 40 percent of the 10.3 trillion passenger-kilometres driven in all OECD member countries.

*Michael Renner is a Senior Researcher at the Washington-based Worldwatch Institute.