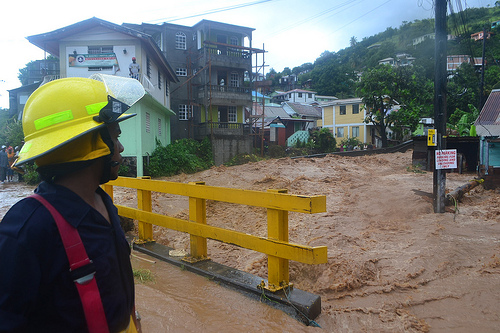 The Caribbean is subject to regular climate-related disasters, as Dominica experienced in 2011. Credit: Desmond Brown/IPS

PORT OF SPAIN, Trinidad, Sep 6 2012 (IPS) - As governor of the Eastern Caribbean Central Bank (ECCB) that groups seven countries, Sir Dwight Venner is all too aware of the low economic growth, debt and financial instability confronting the wider Caribbean.

He told IPS that the region has stressed to international lending agencies such as the International Monetary Fund (IMF) that “unless there is economic growth, the other two cannot resolve themselves.

“So they have responded to that by having this conference where the emphasis is on growth. But what we want from them is some view on how the growth problem is tackled,” he said.

The IMF, in collaboration with the Barbados-based Caribbean Development Bank (CDB), organised a two-day high-level forum bringing together regional finance ministers, central bankers and journalists, hoping to get to the “root” of the financial problems affecting the Caribbean.

“We need to get to the root of why growth has been elusive….It will be important to ensure that growth is inclusive and does not only benefit a privileged few. We need to pay attention to those that may be left behind and improve the social safety net systems. This applies especially to the high level of unemployed youth in the region,” said IMF Deputy Managing Director Min Zhu.

He said the two-day event which ended Wednesday provided the opportunity to exchange views on how the Caribbean is navigating the current global economic crisis.

“Downside risks continue to be high, reflecting delayed or insufficient policy action, including in the eurozone and the United States. In addition, growth prospects in emerging market countries have weakened and commodity exporters are vulnerable to declining prices,” said Zhu, a former deputy governor of the People’s Bank of China.

“We need private sector and donor agencies at the table. We need to find appropriate solutions. During the talks over the next few days, we will embrace the broader international spectrum,” he said.

Newly appointed Trinidad and Tobago Finance Minister Larry Howai argued that the only way out of the financial challenges is for regional governments to “tighten their belts” and instil fiscal discipline.

Jamaica, which is now seeking to enter into a new Standby Agreement (SBA) with the Washington-based financial institution, said the IMF should recognise the need for flexibility in its adjustment programmes.

An IMF negotiating mission is due in Jamaica on Sept. 25, and Finance Minister Dr. Peter Phillips, who is hoping to conclude the new SBA accord by year end, said overall, Caribbean countries appreciated the effort being made to look at specific effects of the global crisis on small states and to define a particular understanding of the structure of these economies and the implications for adjustment programmes.

“I think this represents an advance in the thinking of the Fund; they have already had a discussion in the Asia-Pacific region where there is another significant aggregation of small states and now on the Caribbean,” he said.

“They are proposing to develop a specific policy fund to this from the Fund’s point of view and this represents an important development among the international financial institutions. We welcome that,” he said, noting that the Caribbean must also play its part to deal with the situation.

“These include our reliance on tourism, the fact that we are in a particular climatic zone and subject to regular climate-related disasters which will have an impact on adjustment, the fact that there are socio-economic conditions, the distribution of wealth and income,” he added.

During the closed-door “strictly confidential” meeting, delegates were given firsthand accounts of the economic situation in Latvia and Ireland, with the IMF indicating that both countries “have success stories to tell about economic growth and lowering foreign debt that could be beneficial to the Caribbean region”.

At the end of the meeting here, the IMF said that the Caribbean region has important strengths on which it can build, noting that “political stability, strong investor protections, and observance of the rule of law have made it an attractive destination for investment”.

A communiqué issued at the end of the meeting said that the regional countries “are working to strengthen their economies” as they gradually recover “after a deep recession”.

“Commodity-exporters are benefitting from still-favourable global conditions, but tourism- and services-dependent economies remain adversely affected by the tepid recovery in advanced economies.”

But the IMF warned that low growth remains a key challenge for the region, adding that decisive reforms to boost competitiveness and private sector investment are of the essence.

“In particular, policymakers are encouraged to continue focusing on lowering relative (domestic vs foreign) costs of goods and services to foster exports and reduce external current account deficits. Reforms to address structural impediments will also help in that regard.

“Although the implementation of such reforms is challenging in the short term, in the long run they could bring undoubted benefits for the economies of the Caribbean and help create jobs,” the IMF said, adding that countries with high debt ratios would benefit from pursuing fiscal adjustment steadfastly.

But the international lending agency acknowledged that the challenge to achieve sustainable growth in the region calls for a broad-based collaborative approach.

“Multilateral financial institutions as well as donor partners will need to work closely and coordinate their assistance to maximise the benefits to the region. This could perhaps include credit enhancement for transformational growth prospects.”

Saul Izondo of the IMF Western Hemisphere Department, told reporters that forum provided for “a fruitful exchange of views…some of which provided important food for thought and participants recognised the desirability of a deeper and ongoing regional policy dialogue.”

Venner said that the ECCB countries have “a considerable strategy” for dealing with the matter, noting that “when this (global financial) crisis came we accelerated the move towards an economic union and as you know that is very well advanced”.