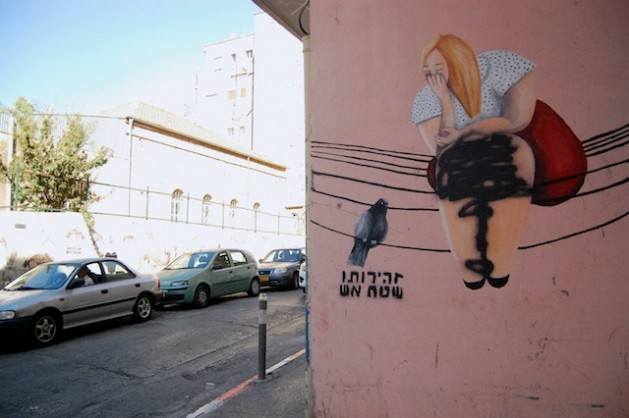 Graffiti in Jerusalem on the position of women. Credit: Jillian Kestler-D’Amours/IPS.

JERUSALEM, Sep 6 2012 (IPS) - After filing the first-ever class-action lawsuit on the issue of gender segregation in Israel, a local religious women’s rights group says it hopes to protect the rights of women in the public sphere of Israeli society.

“It’s a way to stop the phenomenon. Usually we just talk about (discrimination against women) and nothing happens. When people will understand that it’s going to cost them a lot of money, we hope that things are going to change,” Riki Shapira, legal advisor and board member of Kolech, the first Orthodox Jewish feminist organisation in Israel tells IPS.

Kolech filed a NIS 104 million (25.8 million dollar) class action lawsuit on Aug. 29 against Kol Berama, an ultra-Orthodox radio station in Jerusalem. The organisation argues that Kol Berama discriminates against women by forbidding women’s voices from being heard on any of the station’s programmes.

“The issue of this is very symbolic; it’s their voice on the radio station and their voice in the world. Nobody sees them and nobody hears them,” says Shapira.

According to an article in the Jerusalem Post, in its response to the lawsuit, Kol Berama called on the petitioners to respect “the beliefs and outlook of the majority of the (ultra-Orthodox) community, men and women together.”

But not everyone in the ultra-Orthodox, or Haredi, community – which makes up approximately ten percent of the Israeli population – supports the radio station’s decision to exclude women from the airwaves.

A 37-year-old ultra-Orthodox man who gave his name as Moshe (not his real name) spoke to IPS on condition of anonymity. He says he is opposed to gender discrimination within his community.

“The radio station doesn’t give a voice to women, even when women are the issue being discussed. It’s a shame that their voices are being silenced,” he tells IPS. “There are a lot of different voices within the Haredi community. I don’t claim to know how many people think this and that way, but I know a lot that think like me.”

A Jerusalem native, he says that women’s rights are worsening, largely due to people becoming more religious, and extremist groups trying to control the ultra-Orthodox community. “Women should have the same rights as men,” he says.

Indeed, many instances of gender segregation have been reported in Israel in recent months. In July, a court awarded a teenage girl NIS 13,000 after two ultra-Orthodox men forced her to sit at the back of a bus, despite the fact that gender separation is illegal on public transportation in Israel.

The incident occurred in Beit Shemesh, a town located some 30 kilometres from Jerusalem, which has recently been a hotbed of religious-based harassment and intimidation of women. In December 2011, an eight-year-old Israeli girl was spat on for supposedly “dressing immodestly” while on her way to school there.

In August, Israeli bus company Egged quietly decided not to use any images of people in advertisements featured on the sides of buses in Jerusalem. The company took the decision, according to Israeli media reports, so as to avoid offending the city’s ultra-Orthodox residents should the ads feature women.

“All the demands for segregation, those modesty demands, are not something that you can say that all ultra-Orthodox people agree with. Many of them are against it,” says attorney Orly Erez-Likhovski from the Israel Religious Action Centre (IRAC), a branch of the Reform Judaism movement.

“This is actually a demand which is voiced by radical sects within this ultra-Orthodox sector, and because of the nature of ultra-Orthodox life, if I’m an ultra-Orthodox person I cannot allow myself to publicly go against it.”

In a report released in January 2012, titled ‘Excluded: For God’s Sake’, IRAC documented over 50 cases of gender segregation that took place in Israel in 2011. These instances occurred on sidewalks, in health clinics, grocery stores and employment offices, at school and military graduation ceremonies, and at religious holiday events organised by local municipalities, among other places.

Erez-Likhovski says that she expects 2012 to yield a lower number of cases though, largely due to condemnations in the Israeli media and within Israeli society against gender segregation.

“There is this slippery slope that if you allow the practice of segregation in one place, it will penetrate to other places as well. People have started to realise the dangers in it. It is happening everywhere and this is why it’s so important to stop it and explain how dangerous it is,” she tells IPS.

According to Moshe, talking openly about the issue is the best way people – both religious, and secular – can overcome gender discrimination.

“There is no logic or justification (to silencing women’s voices) and it leads to a very bad place,” he says. “The more you talk about it, the more it can have a positive effect.”