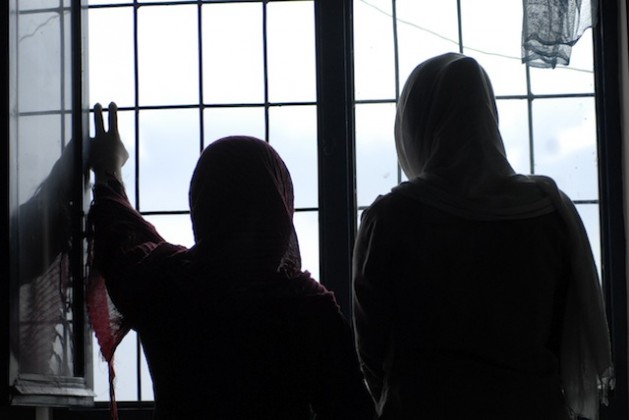 Forced marriages are at the root of many of the murders committed by women in Afghanistan. Credit: Najibullah Musafer/Killid.

KABUL, Sep 20 2012 (IPS) - The number of Afghan women being jailed for murder has been increasing every year, officials say. More than a quarter of the 700 women in prison are serving murder sentences.

Najeeya, 22, is in Pol-e-Khumri central jail roughly 220 km north of Kabul in Baghlan province, with her two sons, aged three and four years. She is charged with the murder of her husband.

“Three years back my husband was killed when he returned from Iran. My brother-in-law and I were arrested,” she told Killid in an interview. “It was evening. There was a knock and my husband opened the door. A man told him to come out. He disappeared. Then his dead body was found.”

The young woman from Baghlan says she is innocent. But Mohammad Jalal, the head of education in Pol-e-Khumri prison says “the government never puts anyone in jail without reason.”

The prosecution’s case rests on the results of an investigation, and evidence provided by two witnesses. Najeeya was accused of intimate relations with her brother-in-law while her husband was away in Iran. On his return the two plotted his murder, according to the prosecution. His body was found in the yard of her house by the police.

Killid’s investigation reveals that the number of women in prison for murder has been rising.

Gen. Amir Mohammad Jamshed, chief of the Afghan Prison and Detention Centres, says more than a quarter of the 700 women in prison are serving murder sentences. There are 34 prisons in the country with a total of 24,613 inmates.

“The number of prisoners increases every year by 24 percent. The number of women charged with murder shows much increase. Murder tops the crimes by women,” he told Killid in an interview.

Women have also been jailed in cases of adultery, robbery, abduction, and narcotics smuggling. “The crimes have causes,” Gen. Jamshed says. Among the reasons he lists the practice of forced marriages and the vast disparity in age between husband and wife. “Poverty can be counted as the cause of problems in the community,” he adds.

Most crimes of murder involving women are found in a few provinces: Herat and the Northern Provinces like Balkh, Baghlan and Jawzjan.

Sayera, an inmate of Pol-e-Khumri jail, is 60 years old. She says her daughter-in-law committed suicide after two years of marriage. According to her, the daughter-in-law set herself aflame after pouring oil on herself.

“Many of our family members were jailed on the accusation of killing her. Some people were released. I have been in prison for one-and-a-half years. I am accused of killing my daughter-in-law and burning her body. That is a lie. I am innocent.”

The woman says her neighbours have given false evidence.

Nooria (not her real name) is in prison in a provincial jail. She says she killed her brother-in-law in self-defence. “My husband lived out of the country. I killed my brother-in-law because he had an evil eye on me in my husband’s absence,” she says.

She says she attacked her brother-in-law with a kitchen knife because he was going to sexually assault her. Her brother-in-law had beaten her many times, and wanted her to have sex with him, she adds.

Gen. Abdullah Azizi, chief of Balkh prison 370 km north-west of Kabul told Killid there were 894 prisoners in the jail, including 62 women. According to him, 20 women prisoners were serving murder sentences.

However, Mohammad Zaher Zaher, head of the Criminal Investigations Department (CID) of Kabul province, believes there is no significant increase in the rate of crime. “The crime figures are normal. No difference, either in terms of increasing or decreasing has been seen in the past few years.”

He says his department has investigated only three murder crimes by women, which is significantly less than crimes perpetrated by men. His field is, however, confined to Kabul province only.

Parween Rahimi of the Afghanistan Independent Human Rights Commission (AIHRC) is in charge of the women’s rights support department in the regional office. She says that since the start of the year 52 women are in jails in three central provinces – Parwan, Kabul and Kapisa – on charges of murder. Most of the killings were acts of revenge, or when the accused felt she had no other recourse. “The violence is so intense the women cannot bear it. So they kill their husbands or other members of his family.”

According to Rahimi, there are also cases where a husband addicted to narcotics has taken his life, and his wife has been accused of murder by his family. She says  forced marriages in Afghanistan are at the root of social problems faced by women.

The murders are usually not premeditated, says Fawzia Amini, head of the Rights Department in the Ministry of Women’s Affairs. “The murder takes place suddenly.” She believes women face all kinds of oppression that affect them psychologically. There is widespread violence in the family and oppressive social customs like polygamy.