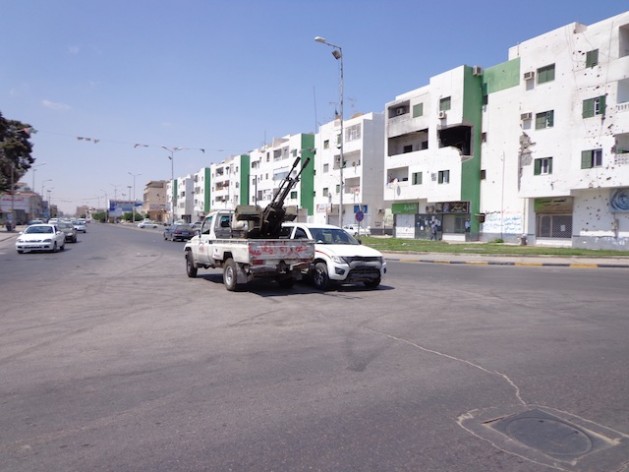 Militia on the streets of Misrata. Credit: Mel Frykberg/IPS.

TRIPOLI, Sep 14 2012 (IPS) - The revolution might officially be over in Libya but the ground war continues. But one enemy is motionless and often hidden, and Libyans are continuing to pay the price with hundreds maimed and killed.

“While the guns may have stopped, landmines, unexploded ordnance (UXO) and discarded or poorly-stored ammunition continue to pose a serious risk to life and limb of the civilian population and to hold potentially serious implications for international security,” according to the United Nations Mine Action Service (UNMAS).

“Two hundred and ten Libyans have been killed or wounded since the end of the war,” Elena Rice from UNMAS told IPS. At least a quarter of that number died, and UNMAS programme manager Max Dyck believes these figures to be conservative.

The country is also awash with small arms. “An estimated 20 million weapons are still freely circulating in Libya today,” Emilie Rolin from Handicap International told IPS. “Three to five victims still arrive in hospital in Tripoli every day.” Handicap International is an independent international aid organisation working in situations of poverty and exclusion, conflict and disaster. The organisation is currently involved in demining projects in Libya.

“The proliferation of all sorts of small arms among the civilian population, who have not been trained to use them, has given rise to accidents which could easily be prevented by specific measures,” Rolin said.

Following the war hundreds of thousands of displaced people have returned to their homes in areas that have been bombed and mined. Families have found explosive remnants of war in their homes, gardens, living rooms, children’s bedrooms, or in their places of work.

Children are often the unwitting targets. “In Misrata (140km east of Tripoli) for example, a third of accidents involve children aged under 14 and nearly 80 percent of recorded victims are civilians under the age of 23. Young people therefore bear the brunt of these accidents,” says Handicap International.

To date the 24 mine clearance and 29 risk education teams comprising 300 personnel currently operating in Libya have destroyed 191,000 landmines and ordnance and cleared  2,650 homes and 75 schools of UXOS. They have also provided 153,000 Libyans with UXO risk education.

But determining the extent of the remaining UXOs is not possible. “There is no way of quantifying this information as accurate records were not kept. Prior to the conflict Libya was contaminated with ‘legacy’ minefields, dating back to World War II. Landmines have been used during various regional conflicts since to protect the border as well as to protect strategic and military assets,” Rice told IPS.

Libya was already littered with UXO before the revolution and from the North Atlantic Treaty Organisation (Nato) bombing campaign last year, but the situation has been significantly aggravated by the war.

The first reports of pro-Gaddafi forces placing new mines began to emerge in late March 2011 when the former government employed anti-personnel and anti-vehicle mines in at least six separate locations including Misrata and Ajdabiya in the east.

The rebellion against the Gaddafi regime also led to an influx of small arms that now threaten to dramatically increase the number of dead and wounded, with rival militias regularly sorting out their differences with weapons.

“Civilians are not used to handling these weapons and know little or nothing about basic safety precautions. These weapons are regularly used during celebrations, even marriages, when guests fire into the air to express their joy,” says Handicap International.

Further complicating the issue is the fact that Nato hasn’t disclosed full details of the UXO it used in Libya. The organisation says that during its air campaign it released 7,700 missiles and bombs. Approximately 303 of these were duds. Most of them were released from warplanes, six from helicopters and four from ships.

Nato recently released a list of its unexploded munitions in Libya, providing the latitude and longitude for each site, the weight of the ordnance and a description of the means of delivery (fixed-wing aircraft, helicopter gunship or naval vessel).

While this has provided demining organisations with vital information necessary to carry out their demining activities, specialists say this falls short of further information required to protect civilians and rid the country of hazards.

Despite Nato’s sophisticated targeting sensors used by aircrews to record infrared video of the impact of a missile or bomb,  it has so far refused to provide exactly where weapons struck and when they failed to function properly.

This information would enable governments and mine-clearing organisations to alert the public to places of risk and to focus efforts on removing high-explosive remnants of war. Without this information UXOs, some of them containing  toxic propellants, pose a threat to accidental discovery by civilians.