Environmentalists in Rio Worried about Reindustrialisation 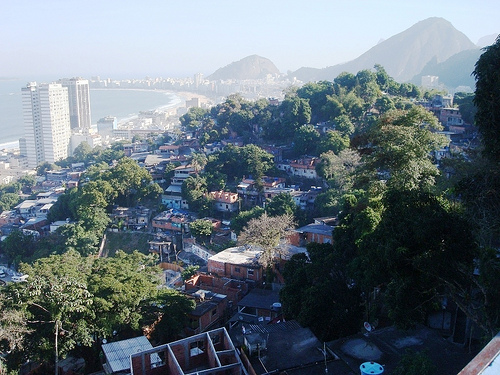 Rio is experiencing a process of re-industrialisation. Credit: Fabíola Ortiz/IPS

RIO DE JANEIRO, Oct 5 2012 (IPS) - The decline in Brazil’s manufacturing sector has not affected some parts of the country, which on the contrary have grown, driven by polluting industries like iron and oil production.

The city of Rio de Janeiro is a prime example of this reindustrialisation process. Industry here is rallying, especially the petrochemical and steelworks sectors, Latin America’s biggest.

But this has tainted its image as an environmentally-friendly city that hosted the most important global summits on sustainable development: the 1992 Earth Summit and this year’s Rio Plus 20.

The Complexo Petroquimico do Rio de Janeiro (Comperj) petrochemical complex is under construction 40 km northeast of the city, and the Siderúrgica do Atlântico (CSA) steelworks began to operate two years ago to the west of the city, connected by the Arco Metropolitano highway.

The state of Rio de Janeiro, which suffered economic decline when it lost industries and financial institutions in the 1980s and 1990s, has been recovering over the last decade, bolstered by policies that have intensified competition among Brazil’s states, according to economist Alberto de Oliveira.

Off the shore of Rio is the Campos basin, the main source of oil in Brazil, where huge pre-salt reserves were found far beneath the ocean floor. The discovery has increased the influence of oil in the local economy.

Policies aimed at bringing about a de-concentration of the economy, which is excessively centred on São Paulo, the biggest city in Brazil, and at restructuring the petrochemical industry, also benefited Rio, which has received investment in the oil, steel and metallurgical industries, Oliveira said.

The growing local presence of the oil industry is also making Rio an important centre of oil and gas industry knowledge.

Transnational corporations like General Electric and British Gas decided to set up technological centres in the Federal University of Rio de Janeiro, where the Petrobras Research Centre has come up with many innovative technological developments.

But the environmental movement complains that these industrial projects are creating a “more toxic Rio”. The plants pollute bays and other coastal ecosystems in the area, force local communities to move, and make small-scale fishing impossible, while benefiting only a small elite, said Gabriel Strautman, an activist with the human rights group Justiça Global.

Besides the expansion of these industries, several ports in the area are being built or expanded, for the export of minerals, especially iron ore, and to support the extraction of offshore oil.

And in the last few years, several shipyards that had fallen into decline in the 1980s have been given a new lease on life, building ships, oil platforms, and other equipment for the oil industry.

This is the “destiny” of the state of Rio de Janeiro, since “85 percent of the oil and gas extracted in this country comes from offshore deposits, and minerals are shipped from the ports,” said the state’s environment secretary, Carlos Minc.

He argues that “not everything can be vetoed” in Rio de Janeiro, which is located between the extensive offshore oil reserves on one side and the state of Minas Gerais – the country’s biggest producer of iron, phosphate, gold, zinc and niobium – on the other.

What can be done, according to Minc – who served as the country’s environment minister from 2008 to 2010 – is negotiate changes of location or technologies with the companies in order to reduce the impacts, or to require social and environmental compensation.

He said that environmental and social requirements are much stricter in Rio than in the rest of the country.

For example, Comperj agreed to build 22 km of commuter railways in nearby urban districts, complete the sanitation network in two municipalities, implement sewage treatment systems, expand the availability of piped water in the petrochemical complex’s area of influence, and clean up the rivers by planting six million trees along the banks, Minc pointed out.

In addition, the state-run Petrobras oil firm, which owns Comperj, pledged to protect mangrove forests around the complex, and “to not leak a single drop of oil or waste water in Guanabara Bay,” he added.

And the maximum allowable emission concentration for pollutants will be eight times higher than national standards, he stressed.

But these promises do not reassure the small-scale fisherpersons in Guanabara Bay, which is surrounded by the Rio metropolitan region, home to 12 million people.

“It will be the Armageddon of the Bay,” said Alexandre Anderson, the head of the Associaçao Homens e Mulheres do Mar (AHOMAR – Association of Men and Women of the Sea), whose members are already suffering the damage to fishing caused by another Petrobras unit, the Duque de Caxias refinery (Reduc).

He said the enormous petrochemical complex would require the construction of a number of pipelines, and would significantly increase the traffic of ships in the bay, where the members of AHOMAR fish.

The Reduc plant, which is located within the urban limits, next to Guanabara Bay, has had a number of environmental accidents since it began to function in 1961. In 2000, for example, it spilled 1.3 million litres of crude oil in the bay, whose effects are still being felt today.

Minc pointed out that Petrobras signed an agreement to spend 530 million dollars on 52 actions to correct environmental problems that it has caused.

The Companhia Siderúrgica Nacional (CSN), a steelworks built in 1946 en Volta Redonda, 130 km from Rio de Janeiro, has severely polluted the Paraíba do Sul river, the main source of water for the Rio metropolitan area.

As a result of sanctions, the CSN also signed an agreement to modify its behaviour, and has fulfilled 90 percent of the accord, Minc said.

Reduc and CSN, both older-generation plants, pollute much more than the new factories, which use cutting-edge technology, the environment secretary said.

Nevertheless, the modern two-year-old Siderúrgica do Atlântico (CSA) has become a target of environmentalists and local residents because of the plant’s mineral dust emissions. The factory is located in Santa Cruz, a low-income neighbourhood of 220,000 people on the west side of Rio de Janeiro.

The environmental authorities slapped fines on CSA, forced it to pay reparations to local residents, and brought its work to a halt until the company, controlled by Germany’s ThyssenKrupp corporation, agreed to remedy 130 specific environmental problems.

Thanks to the agreement, a system that is “unique in the world” was installed, to cut the mineral dust emissions by 90 percent, Minc said. In addition, measures were taken to reduce the flooding caused by the rerouting of a river on the company’s land.

Minc said that in this case, the adjustments, corrections and compensation were the alternative found to avoid closing down the steel mill, which employs 8,000 people.

But he added that “sometimes we do veto things.” He mentioned three projected ports whose construction was not approved, because they would have threatened ecosystems rich in biodiversity and important to tourism, the most distant of which was 180 km from the city of Rio.

But the state government did authorise the expansion of the four existing public ports, as well as the construction of two large private ports by Eike Batista, considered the richest man in Brazil.

The biggest of the private terminals, dubbed the “Superporto de Açú”, located 320 km northeast of Rio, will be used to export iron ore and ship in coal. That area will also host another large steel mill, thermoelectric plants and different industries, involving a total investment of around 40 billion dollars.

In that case, the Rio de Janeiro state secretariat of the environment forced the project to change locations, in order to preserve the coastal ecosystem, including a lagoon and mangroves. It also required that the company provide basic sanitation to nearby cities, create a biological conservation corridor, and use the cleanest available technologies, Minc said.

Railways, pipelines, roads and warehouses are being built along with the port at Açú and another “super-port” under construction by Batiste’s business group at Itaguaí, west of Rio de Janeiro, for the export of minerals from Minas Gerais.