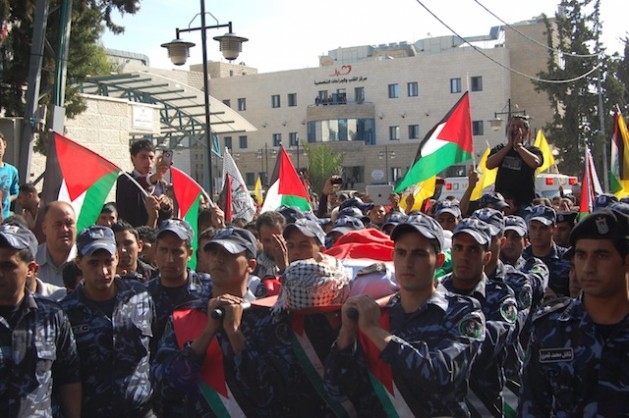 Anger surfaces in the West Bank at the funeral procession for Rushdi Tamimi. Credit: Jillian Kestler-D’Amours/IPS.

RAMALLAH, Occupied West Bank, Nov 21 2012 (IPS) - Hundreds of Palestinians marched through Ramallah Tuesday afternoon to mourn the death of a Palestinian protester who was fatally wounded during a demonstration against the ongoing Israeli assault on the Gaza Strip.

“It’s mixed feelings, between being sad and angry, because he was killed in cold blood,” said 29-year-old Raya Ziada, a resident of Ramallah who participated in the march. “As a Palestinian, I’m here. It’s a Palestinian loss.”

Rushdi Tamimi, 31, died on Monday of wounds sustained over the weekend during a protest held in the West Bank village of Nabi Saleh against Israeli violence in Gaza. According to an eyewitness account published by the Popular Struggle Coordination Committee (PSCC), a group of grassroots Palestinian activists, Israeli soldiers shot Tamimi in the stomach with live ammunition and rubber-coated steel bullets.

Tamimi reportedly suffered from ruptured intestines and two ruptured arteries before succumbing to his injuries.

Israel continues to bomb the Gaza Strip amidst talks of an imminent ceasefire between Israel and Hamas, the Islamic party that governs the Palestinian territory. More than 135 Palestinians in Gaza have been killed, and over 1,100 were injured in less than one week of fighting.

But the violence hasn’t been restricted to the Gaza Strip, as the Israeli army is using extreme force to suppress Palestinians from across the West Bank who have taken to the streets in outrage over the situation in Gaza.

According to Shawan Jabarin, director of Palestinian human rights group Al Haq, the general feeling among Palestinians in the West Bank is extreme anger and frustration at the killings in Gaza.

“I think people are very, very angry now about what’s going on in Gaza. Then the Israelis started using live bullets (in the West Bank). They are using excessive force against people. More demonstrations and more shootings will happen,” Jabarin told IPS.

He added that the popularity of Hamas is increasing, while the Palestinian Authority (PA), which rules over the West Bank, and PA President Mahmoud Abbas appear weak.

“The popularity of Hamas is increasing dramatically these days in peoples’ minds,” Jabarin said. “There are more and more voices to stop the security coordination between Palestinians and Israelis. People are angry (at the PA).”

Palestinian news agency Ma’an reported that over 50 people have been injured across the West Bank in demonstrations in recent days. Ma’an also reported that masked Palestinian gunmen opened fire on an Israeli military checkpoint near the northern West Bank city Jenin on Monday.

“The fire was probably carried out by a vehicle that fled the scene, with several structures in the area damaged. Soldiers searched the area for suspects while Palestinians threw rocks at them,” an Israeli military spokesperson told Ma’an.

Israeli settlers are also suspected of carrying out two attacks in the West Bank: a mosque was set on fire in the Palestinian village Urif, near Nablus, and a car was burnt and racist graffiti was spray-painted in Sinjil village in Ramallah area.

Dozens of Palestinians have been arrested across the West Bank in the past week. Israeli forces re-arrested Thaer Halahleh, a Palestinian prisoner who recently spent 77 days on hunger strike in Israeli jail in protest of his detention without charge. He was released after four days in detention.

“There’s definitely been a spike in arrests,” explained a spokesperson from Addameer, a Ramallah-based Palestinian prisoners’ rights association. “(The Israelis) are using this as an opportunity to arrest more young people. To suppress, they arrest them at a young age.”

In Ramallah, 67-year-old Aisa Hralif watched from the sidewalk as the funeral procession for Rushdi Tamimi made its way towards the city’s central square, Al-Manara. The scene made him feel, he told IPS, that a third Intifadah, or Palestinian uprising, was beginning.

“There will be more violence. Every day in Beitunia (village near Ramallah), there are clashes. It’s like a third Intifadah,” Hralif said. “Gaza is not alone. We’re with them.”