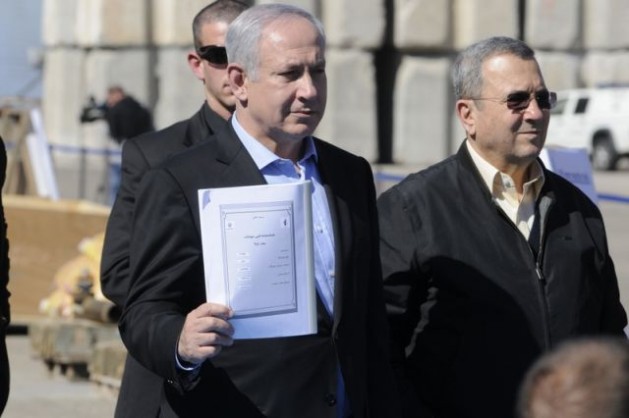 WASHINGTON, Nov 6 2012 (IPS) - A new twist was added to the longrunning media theme of a threat by Israeli Prime Minister Benjamin Netanyahu to go to war with Iran when news stories seemed to suggest Monday that Netanyahu had ordered the Israeli military to prepare for an imminent attack on Iranian nuclear sites in 2010.

Netanyahu backed down after Israeli Defence Forces chief of staff Gabi Ashkenazi and Mossad director Meir Dagan opposed the order, according to the reports.

But the details of the episode provided in a report by Israel’s Channel 2 investigative news programme “Truth”, which aired Monday night, show that the Netanyahu order was not meant to be a prelude to an imminent attack on Iran. The order to put Israeli forces on the highest alert status was rejected by Ashkenazi and Dagan primarily because Netanyahu and Defence Minister Ehud Barak had not thought through the risk that raising the alert status to the highest level could provoke unintended war with Iran.

All the participants, moreover, understood that Israel had no realistic military option for an attack on Iran.

Most stories about the episode failed to highlight the distinction between an order for war and one for the highest state of readiness, thus creating the clear impression that Netanyahu was preparing for war with Iran. The stories had to be read very carefully to discern the real significance of the episode.

The Israeli Ynet News report on the story carried the headline, “Was Israel on verge of war in 2010?” and a teaser asking, “Did Prime Minister Benjamin Netanyahu and Defense Minister Ehud Barak try to drag Israel into a military operation in Iran without cabinet approval?”

AFP reported that Netanyahu and Barak “ordered the army to prepare an attack against Iranian nuclear installations.”

The Reuters story said Netanyahu and Barak “ordered Israeli defence chiefs in 2010 to prepare for an attack on Iran’s nuclear facilities but were rebuffed….”

And AP reported that the order from Netanyau was for a “high alert for a looming attack on Iran’s nuclear program” and that the episode “indicated that Israel was much closer to carrying out a strike at that time than was previously known.”

Washington Post blogger Max Fisher certainly got the impression from the press coverage that Netanyahu and Barak had “attempted to order the Israeli military to prepare for an imminent strike on Iran but were thwarted by other senior officials….” Fisher concluded that Netanyahu was “more resolved than thought to strike Iran….”

The coverage of the story thus appears to have pumped new life into the idea that Netanyahu is serious about attacking Iran, despite clear evidence in recent weeks that he has climbed down from that posture.

The details of the episode in the original Channel 2 programme as reported by the Israeli daily Yedioth Ahronoth suggest that none of the participants in the meeting believed that Netanyahu had decided on actual war with Iran.

The incident occurred, according to the programme, after a meeting of seven top cabinet ministers at an unspecified time in 2010. As Dagan and Ashkanazi were about to leave the meeting room, the programme recalls, Netanyahu ordered them to prepare the military for “the possibility of a strike” against Iran by putting the IDF on the highest level of readiness.

Netanyahu used the code word “F Plus” for the alert status, according to the Channel 2 programme.

Ashkenazi and Dagan reacted strongly to the order, and Netanyahu and Barak eventually backed down. But both Ashkenazi and Barak appear to agree that the issue was not whether Israel would actually attack Iran but the alert itself. Ashkenazi’s response indicated that he did not interpret it as a sign that Netanyahu intended to carry out an attack on Iran. “It’s not something you do if you’re not sure you want to follow through with it,” Ashkenazi was quoted as saying.

Barak sought to downplay the order for the high alert status, asserting that raising the alert level “did not necessarily mean war”.

“It is not true that creating a situation in which the IDF are on alert for a few hours or a few days to carry out certain operations forces Israel to go through with them,” the defence minister said.

Ashkenazi was not asserting, however, that Netanyahu would be forced to attack. Rather, he feared it would have the unintended consequence of convincing Iran that Israel did intend to attack and thus trigger a war.

The former IDF chief highlighted that danger in commenting, “This accordion produces music when you play with it,” according to “sources close to” Ashkenazi – the formula usually used when an official or ex-official does not wish to be quoted directly.

Barak also said Ashkenazi had responded that the IDF did not have the ability to carry out a strike against Iran. “Eventually, at the moment of truth, the answer that was given was that, in fact, the ability did not exist,” Barak is quoted as saying on the programme.

Significantly, Barak made no effort to deny the reality that the Israeli Air Force did not have the capability to carry out a successful attack against Iran. Instead he is blaming Ashkenazi for having failed to prepare Israeli forces for a possible attack.

Ashkenazi angrily denied that obviously political charge. “I prepared the option, the army was ready for a strike but I also said that a strike now would be a strategic mistake,” he is quoted as saying.

Israeli military leaders are still saying publicly that the IDF can carry out a strike. But while Ashkenazi is quoted as saying the army was “ready for a strike”, that is not the same as claiming that Israel had a military option that had any chance of success in derailing Iran’s enrichment programme. And in February 2011, he told then Chairman of the U.S. Joint Chiefs of Staff Admiral Mike Mullen that references to such a military option were “empty words”, because “Israel has no military option,” according to an earlier report by Yedioth Ahronoth.

Despite the public political feud between them, both Barak and Ashkenazi implied that the purpose of the high alert was to achieve a political effect rather than to prepare for an actual attack.

Both Ashkenazi and former Mossad director Dagan were apparently shocked that Netanyahu and Barak would be so irresponsible as to run the obvious risks of feigning preparations for a war with Iran. Dagan concluded that Netanyahu is unfit for leadership of the country – a point that he had made repeatedly since leaving his Mossad post in 2011.

Netanyahu sought to manipulate the supposed threat of military force against Iran to put pressure on U.S. President Barack Obama to adopt harsh sanctions against Iran and even get him to pledge to use force if Iran did not yield on its nuclear programme. The firm rebuff to that ploy by Obama last summer brought that phase of the Netanyahu military option ploy to an end, as indicated by his failure to include any implicit threat in his U.N. address in late August.

Netanyahu continues to insist publicly, however, that he is considering the military option against Iran. In an interview for the Channel 2 programme, he said, “We are serious, this is not a show. If there is no other way to stop Iran, Israel is ready to act.”

Israeli political observers have suggested that Netanyahu’s belligerent posture has now become primarily a theme of his campaign for reelection as prime minister. But as the coverage of the 2010 episode indicates, the news media have not yet abandoned the story of Netanyahu’s readiness to go to war against Iran.