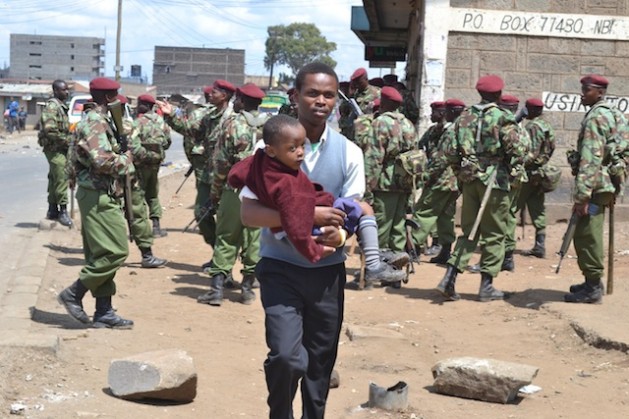 A man walks past the general service unit with his kid during the inter-ethnic riots in Kenya's Eastleigh suburb. Credit: Brian Ngugi/IPS

NAIROBI, Dec 1 2012 (IPS) - The wave of insecurity that has hit Kenya in the last few months is causing severe damage to the country’s recovering economy, local economists have warned.

Abdi Mohammed, an investment analyst at Stanbic Investment Management Service, told IPS that even though the real extent of the damage to the country’s economy has yet to be quantified, key sectors are losing money due to unprecedented levels of insecurity.

Over the past year, the country has witnessed a spate of terror-related attacks on civilians, which have been mostly blamed on Somalia’s Islamic militant group Al-Shabaab. These attacks have prompted travel advisories from nations such as the United Kingdom and the United States, which have urged their citizens to keep away from this East African nation.

Police Commissioner Mathew Iteere told IPS that Kenya has witnessed a total of 58 grenade attacks carried out by suspected Al-Shabaab sympathisers this year, which caused the deaths of 67 people and injured a further 308.

And according to Mohammed, among the sectors worst hit by this violence is the tourism industry, especially as it heads into peak season in December.

Mohammed told IPS that if the level of instability here escalated, Kenya’s fragile sense of business confidence would be hurt, both locally and internationally.

“We understand already that many potential investors are reconsidering whether to relocate their investments if insecurity persists,” said Mohammed.

His comments were echoed by Johnson Nderi, researcher for Corporate Finance at Suntra Investment Bank in Nairobi, who said that the country’s economy had been affected to the tune of millions of dollars on a monthly basis.

“The image being propagated around the globe of all these incidents of insecurity will wear away at the recently-renewed investor confidence in the country. In real terms and in due time we will be able to tell the damage to the economy, but it is happening now,” he told IPS.

Internal Security Minister Katoo Ole Metito also said that terrorism was one of the most crucial challenges faced by security agencies in the country.

“I want to assure Kenyans that we are committed to fighting terrorism in this country and we need their support,” Metito said last month.

Kenyan business leaders, in interviews with IPS, said that the government needed to deal firmly with the rising insecurity.

“Among the Kenyan business community there is serious concern about what is happening in the country,” Vimal Shah, the chairman of the Kenya Association of Manufacturers, told IPS.

“The continuing episodes of disorder are hurting sectors like tourism directly, as visitors are keeping away. But it is also having an impact on retail trade, as we have seen in many towns,” he said.

According to Patrick Obath, the chair of the Kenya Private Sector Alliance, the country’s image as a business destination of choice is being hurt internationally and this might delay foreign direct investment in the country.

“Kenya is a very stable country but due to these security challenges we are, in the short term, bound to see investments delayed,” Obath told IPS.

His comments were echoed by Fred Kaigua, the chief executive of the Kenya Association of Tour Operators, who said: “We would like the government to step up intelligence as well as its response to cases of violence in the country.”

Meanwhile, the increased insecurity has given rise to fear and suspicion of foreigners, especially Somalis.

Mohammed Hirsi, 64, a businessman in Kenya’s Eastleigh suburb, located two kilometres east of the Kenyan capital Nairobi, is among hundreds of affluent traders of Somali descent who have been affected.

On Nov. 18 suspected terrorists killed seven passengers and injured 30 others in a blast that occurred inside a matatu or mini-bus taxi in the area. Inter-ethnic clashes and looting broke out and lasted until Nov. 20 as locals blamed the immigrant Somali community for the terrorist activity.

Hirsi’s supermarket is among the many Somali-owned businesses that were looted in the rampage. In the ensuing two-day melee, more than 30 casualties were reported at the Kenyatta National Hospital, while contingents of police and soldiers were deployed in an effort to contain the situation.

Since then fear and suspicion have remained rife in the area.

“The attacks and the ensuing revenge looting, in which I lost goods worth millions of shillings, have dented the long years of good relations between Somali and non-Somali communities living here,” an obviously bitter Hirsi told IPS.

“We feel these attacks on the Muslim community are being carried out by ignorant individuals who are targeting Muslims, especially Somalis, primarily due to their religion,” he said, adding that his fellow Somali businessmen are living in constant fear of further reprisal attacks.

Local residents are indifferent to opinions like his, however.

According to one, John Njoroge, the Somali community in the area is culpable of abetting the terrorists by failing to report to police the names of Al-Shabaab sympathisers who live among both communities.

“If they maintain that they are law-abiding citizens, why have they been reluctant to report the criminal elements among them to the police?” Njoroge asked IPS.

The country’s two leading politicians, President Mwai Kibaki and Prime Minister Raila Odinga, have since broken their silence over the recent attacks.

Speaking when he led the launch of the national voter registration exercise in the capital on Nov. 19, Kibaki issued a stern warning to those planning to disrupt the process, saying they would face the full force of the law.

Kibaki said the government had already stepped up security around the nation to ensure that the process went smoothly.

“Please don’t seek to be forgiven for any mischief you do, because whoever you are we shall take action,” a tough-talking Kibaki said. “There is no point in anybody trying to mess up an election. Nobody has a right to interfere.”