BUDAPEST, May 23 2013 (IPS) - As the European Union accuses Hungary of shifting towards authoritarianism, a spike in emigration from the country has led many to speak of a politically motivated exodus. Others suggest that economic conditions play a role in the westward flow of brainpower that is leaving Hungary’s future uncertain. 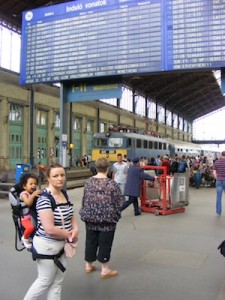 Observers agree that ever since the conservative party Fidesz won a two-thirds majority in parliament in 2010, the government has taken many steps to concentrate power, including by limiting the independence of the judiciary as well as freedom of speech.

The government also approved a new constitution that enshrines the values of Christianity, family and patriotism, having drafted it without consulting other parties or civil society groups.

“We are thinking of leaving the country,” says Sára, a young mother in her thirties who lives in Újlipotváros, one of Budapest’s preferred districts among the liberal intelligentsia and middle classes. “My partner, my fourteen-month-old child and I are no longer considered a family under the new constitution,” she explains.

“It’s not just that we can’t pay taxes together. The feeling also makes us mad – with what right does this government say we are not a family? While the rest of Europe is enlarging the definition of family to even include homosexuals, we are going in the opposite direction.”

Many have already made the decision Sára is now considering, but the real reasons behind the emigration phenomenon remain the object of a heated political debate.

While official estimates state that 300,000 Hungarians live abroad, Gyorgy Matolcsy, governor of the Central Bank, recently spoke of half a million Hungarians leaving their homeland in recent years, which would constitute 5 percent of Hungary’s population of 10 million.

Currently about 250,000 Hungarians are registered abroad, although real numbers are likely higher because many migrants do not want authorities to know they left in order not to preclude current or future state benefits.

Austria, Germany and the United Kingdom are the preferred destinations for these immigrants. London may be home to up to 200,000 Hungarians, so many that it is popularly referred to as the second largest Hungarian city.

"My partner, my fourteen-month-old child and I are no longer considered a family under the new constitution."
-- Sára, a young mother

Yet unlike other countries in the post-communist region, Hungarians have traditionally resisted migrating, partly due to the strength of Hungary’s social safety net, but also for cultural reasons.

Politicians are struggling to explain why this tendency has suddenly changed. The debate has erupted around the worrisome 56 percent of students who consider leaving Hungary, a group that has often participated in international programs and can easily integrate in Western European labour markets.

“The issue has become politicised, but it is underlined by economic and structural factors,” Béla Soltész, a migration researcher at Corvinus University in Budapest, told IPS.

“There is an opposition discourse which blames the phenomenon on bad management by the government, particularly in the education sector, whereas the government pushes the view that those leaving the country are becoming unfaithful to it, putting their individualistic and materialistic needs in front of the good of the country,” Soltész says.

“Both are simplifying the issue,” he adds. “This is a 10-year phenomenon that began gradually with the opening of the European Union’s labour market. In some ways Hungary is catching up with the region.”

Although reliable data on them are lacking, many of the emigrants are well-educated opposition sympathisers with access to social media, which gives greater visibility to the “best and brightest” in the debate.

Some in this group have been affected by recent educational reforms – especially since students now have to sign contracts in order to benefit from state support as they go through their education and must pay back this support if they move abroad.

But in a country where doctors make an average of 700 euros per month, the role of high unemployment and a lack of economic and professional prospects may be more significant than political discontent.

Hungary’s gross domestic product decreased by 1.7 percent in 2012 and no growth is expected in 2013. Unemployment now exceeds 10 percent and is three times higher in the case of the younger generation.

“People with technical formation can nowadays very easily compare their salary with that of their peers in Norway, the UK or Holland, where pay can be ten times higher. And then they may blame the government for these differences,” Soltész told IPS.

While recent youth migration may be short-term, the growth in Hungarian professional networks abroad might turn it into a more permanent phenomenon in the future, Soltész warned. “The most skilled and bright are leaving and the remittances are not that high.”

“Reinsertion could be difficult because the labor market is very informally structured,” Soltész noted. “Qualifications obtained abroad are less important or understood than personal contacts.”

“And we don’t know what will happen to the people who do their whole education abroad and build their professional contacts there.”